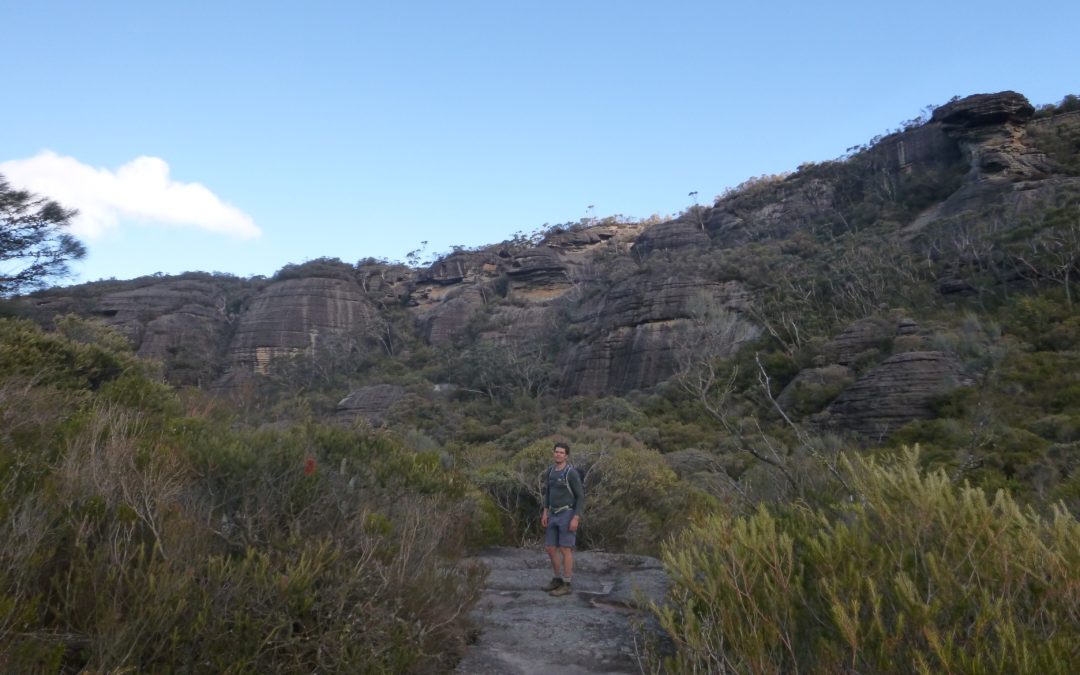 We set off for long gully campground just after 7:30am from the Bhundoo Bush Cottages which was our basecamp for the budfest weekend. After a brief examination of the map to make sure we were on the correct track because the Byangee Walls track also departs in the same vicinity we set off.  We slowly started gaining elevation of a few hundred metres on the Kalianna Ridge trail which then continues as the castle walking trail once it hits the cliffline.

From here we followed the track that contours along the base of the cliffline following the markers which are arrows that have been scratched in the rock in places. The track gradually got steeper and we were scrambling using arms and legs in places weaving around the trees in the middle of the track. We passed several camp caves along the way including one that was used by Marty & Paul’s SUBW group on a previous trip easily recognised by the overhang and loveshack cave description mentioned in their trip report.

We made it to the Junction of Monolith Valley and The Castle in around 1 and half hours then continued to the base of the Castle and turned right to what we thought was the pass to climb up. Once we climbed up the rock slab Kosta who was the furthest up the pass told us it wasn’t feasible to keep going so we came back down and retraced our steps. Then found the correct way through the tunnel to the other side of the tadpole formation that is the tail of the castle.

There is a walk of a few hundred metres before the track then becomes full on rock scrambling sometimes almost vertical in places to get to the summit. The first of a series of ropes is there assist to climb up to a narrow ledge where care is required to scramble around to a large diamond shaped rock where you only move your hands along the rock as there are no footholds and have to hug the rock then try and lower yourself down onto the next part. This part is exposed to a 10m cliff.

Further up we came to the proper rope assisted scrambles that lead to the summit pleateau. The first pitch is up a vertical slab then the second one is much shorter up a groove in the rock to a platform. The third pitch goes up a vertical chimney and the last one goes up another much more exposed slab.

The entire day we had continuous unrelenting wind. At the base of the slot climb we noticed a very fast approaching rain band heading towards us. The wind increased to a much stronger level with the oncoming cloud so I opted to retreat to a nearby cave for shelter as I was still at the base of the slot climb. The others were already near the summit pleateau so they continued on and sheltered in a cave on the pleateau then continued on to the southern end of the Castle to take in the views.

Once we regrouped and descended we had lunch in an overhang and discussed what else we could check out since we were already up there. We checked out Monolith Valley but didn’t have time to go as far as the seven gods pinnacles but it was a great place to visit none the less. More time will be spent in this area on a future trip as there were plenty of others keen for the Castle and Monolith who missed out as they were on separate walks.

Our descent back to the car took around two hours from Castle Gap.

Thanks for the team for a great day out