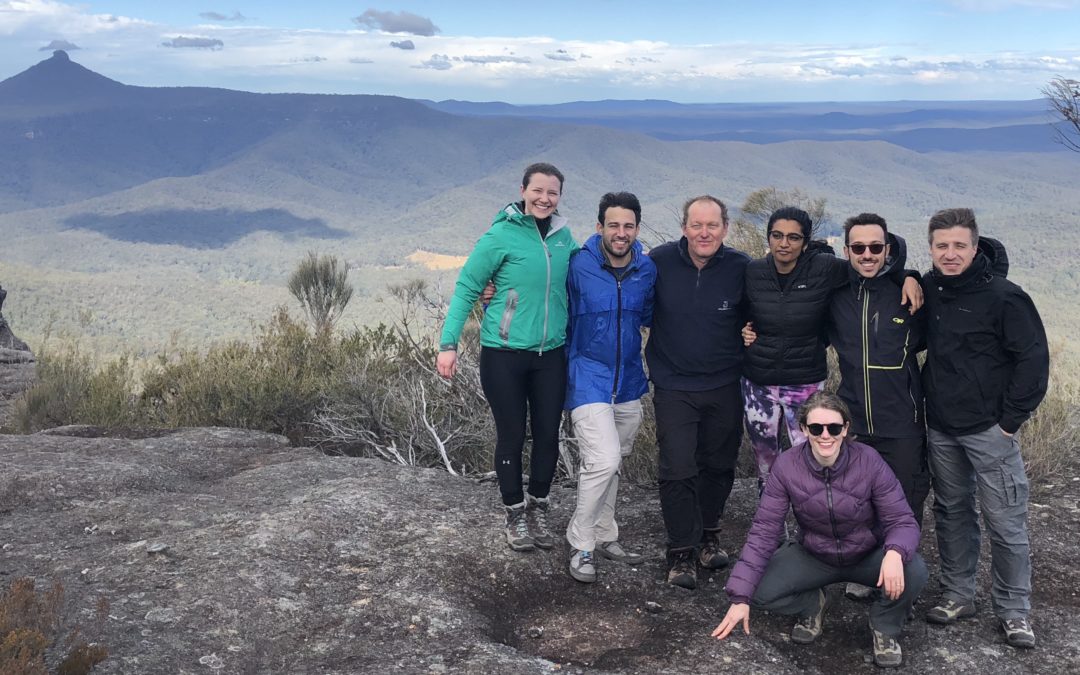 This trip was planned to give both experienced and novice bushwalkers a chance to get together and have share a great location and some good company.  The Budawangs have lots of walking options ranging from the seriously strenuous Castle Walk to the more moderate but equally stunning Pigeonhouse Mountain track. Nestled between these locations is a small private camping and accommodation property which welcomes bushwalkers and has great amenities and million dollar views of the mountains. We just had to find enough keen participants to fill the place and make it worthwhile.

One email later and a listing on SUBW and we had 23 people on board including some of our newest members, overseas students, a few guests and a lot of familiar faces. Everything was coming together. What could possibly go wrong?

Our first big challenge was transport with no public transport to the area and lots of people needing lifts. Lots of plans and changes to plans were made. Dozens more emails followed. The Club is lucky to have a very generous bunch of car owners happy to share with others and make space available, often at some personal inconvenience and we are very grateful to Paul, Steve, Andrew, Lisa, Kat, Tim and Geoff for getting everyone there and back safely.

Transport all sorted! What could possibly go wrong?

With a few days to go, a huge bushfire broke out on the main road leading from the coastal town of Milton to our camp location. The Rural Fire Service had its hands full with a major emergency and the fire was listed as “out of control”. It looked like all the access roads to the Budawangs were closed and there was a lot of concern in the group as the camp and walks are located in dense bushland in the Morton National Park.

We spent the next few days monitoring the “Fires Near Me” website and wondering if the risk of a nearby fire was enough to postpone the trip. This was a tense time as we had to balance the camp owner’s confidence that all would be well and a positive sign of forecast westerly winds pushing the fire away from the Budawangs against the fact that the fire was officially listed as out of control and several of our access roads remained closed. Even more emails followed.

By Thursday night the fire was officially downgraded from “Emergency” to “Watch and Act” and then to “Advice” though it was still listed as out of control. The westerly winds held up and the camp owner said he was confident and his local RFS and NPWS contacts were not concerned. We decided to Press On Regardless and go.

The first groups to head south on Friday evening met up in Milton at the excellent wood fired pizza joint before embarking on the 45 min journey inland to our campground at Yadboro. They soon encountered RFS road closures and were turned back. A flurry of phone calls followed and we eventually had everyone diverted south and then west around the fire and into Yadboro but not before some tense moments when it looked like we could not get through. It’s a long dark, dusty and challenging drive and it was a massive relief to arrive and see that everyone had made it. There had been some big efforts on the trip down including Simone who had her first drive in a right hand drive car on the left hand side of the road on the way down.

The campsite has a couple of cabins and one of these was quickly occupied by a large and very relieved crew of SUBW-ers. Before long, the heater was on and copious quantities of liquid refreshments were being consumed. Old acquaintances were renewed and new friendships were made. There were juggling and yoga displays whilst outside a couple of hardy types were battling strong westerly winds to get tents set up. We were short some pegs which made things challenging as the winds were gusty.

A formal fire safety plan was discussed and revised and we went through our options in the event that the fire situation worsened.

We eventually called last drinks about 1:30 am and managed to clear the cabin so its occupants could go to bed. That wasn’t the end of the party – it just moved locations and there were some self-inflicted sore heads and bleary eyes next morning.

Saturday dawned bright and clear with no sign of smoke nor any wind. The early risers were treated to a stunning view of the sunrise hitting The Castle and the imposing Byangee Walls towering over the camp.  It was time to get moving, but first – coffee! With no mains electricity (only solar) Sam was unable to use  her espresso maker and so Karola’s stove top coffee maker was given a serious workout being shuttled between cabins to address multiple caffeine addictions.

Andrew’s group of 5 were the first to set off with an ambitious target to climb The Castle. The track notes suggest this is a 10 hour trip, meaning the guys would struggle to be back before dark.

Paul’s group of 8 were the next to leave with a quest to climb Byangee Walls, a lot lower than The Castle, but with a lesser known track.

A little later in the morning Nam led a small and hardy group to tackle Pigeonhouse Mountain which although steep in places has a well defined track and some fun ladders to the final summit.

One or two of our number succumbed to the bright sunshine and amazing views and spent the day back at camp – no doubt enjoying the quiet solitude of the place with all the noisiest campers out walking.

By 4:30pm both the Pigeon House and Byangee crews were back at camp having had a great day. A few people headed down to the Clyde River at the bottom of the property and a few crazy individuals even had a quick and freezing swim before coming to their senses.

Andrew’s  Castle Crew arrived back just before 5:30 pm having put in an amazing effort to climb the mountain and explore nearby Monolith Valley and still get back before dark. It was good to have everyone back safely.

Tales of the day’s exploits and beers flowed as everyone got together and started to think about dinner. A wide range of food was quickly produced and a big shared communal meal followed. Over dinner there were some common themes of stunning views, wild winds, driving rain (it is the Budawangs) and great teamwork contributing to the adventure.

The property owner arrived and said he was happy for us to light the campfire. The wind had dropped a little, though we still took the precaution of rolling out a large professional fire hose just in case. Lisa got the fire going and we soon had the full crew circled around on benches. We cooked some chestnuts and there was lots of chocolate on offer.  There were a few early retirements to bed as the previous late night and a big day of walking took its toll but not before Nanakie and Ben had drummed up support for an early morning adventure.

The fire was fully extinguished by about 10:30 and everyone crashed.

A hardy bunch led by Nanakie dragged themselves out of bed at 4 am on Sunday morning and headed off to climb Pigeonhouse Mountain in the dark with a plan to see the sunrise. They were rewarded with some amazing views of the sun coming up over the ocean to the east and the light gradually reaching the higher peaks of the mountains. They came back to camp buzzing after the experience and a few of us regretted not making the effort to get up early.

Another small group headed off after breakfast to walk along the river front and managed to become navigationally embarrassed at one point as the river bends around a billabong before regrouping and finding our way back.

We bumped out of camp around noon with some of us meeting up at the Fisherman’s Club at Gerroa which has reasonable food and amazing views back along 7 mile beach. It was a nice ending to what had been a terrific weekend.

Our trip leaders have promised to write a brief report on their respective walks.

A big weekend like this can only happen if everyone pitches in. Our drivers, the trip leaders; Paul, Andrew, Nam and Nanakie and those who took charge of the cabins; Karola and Sam are all due a lot of thanks for their efforts.