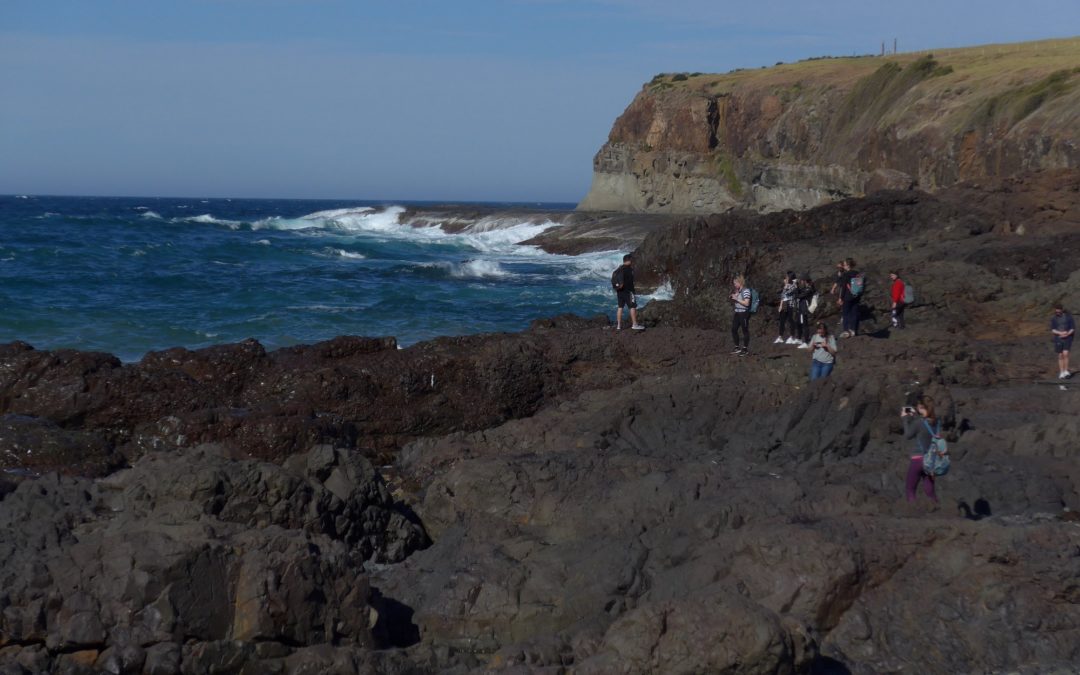 On Saturday 11 August 2018 I led a walk along the Kiama Coast Walk on the South Coast. Although not technically a difficult walk, it is 22km in its entirety. What I think makes it unique is it’s relatively “Un-Australian” landscape (I hear cries of Maaate, that Un-Australian!) being more like scenery you might see on the Irish or English coastline. It’s quite unusual for a coastal walk in this country.

For this trip we did about 12km of it which enabled us to walk from Gerringong station to Kiama station on the South Coast Line. It was very popular, with the trip becoming full within an hour of posting! A contrast to my previous trip when I only had one member make it on my walk!  But I was happy to see many beginners and new members which I hope will inspire them to take more challenging trips with SUBW in the future.

It was a warm day, and despite the northerly wind picking up, it didn’t become a problem for our group.

Lin had missed the train but wanted to come down anyway , so contacted me in time to arrange to get a later train. She opted to walk from Kiama and maybe meet us part way along the track.

We began at Gerringong Station , but had to walk through the town to get to the beach where the trail began. The group chose to walk along Werri Beach rather than the paved bike track.  Although it was at least 2km the time passed quickly and we were soon crossing the entrance to Werri Lagoon which thankfully was closed to the sea, so we could get across without wet feet. Then the walk proper began , winding its way across the traditional lands of the Wodi and Dharawal people. Information boards along the way explained the cultural and historical background of this beautiful place. We wound our way around headlands and many hills as we looked for humpback whales out to sea. We managed two sightings, I saw two splashes (of breaching whales), and someone else saw more (way out to sea) later in the day.

On a headland, a small remnant of the original coastal forest invited inspection. It a goblin forest of ancient fig trees and lilly pillys, almost like a secret room.

Continuing on, we soon spotted a seal “rafting” close to the coastline. It was just taking a break from the large north easterly swell by floating on its back with a flipper raised for stability. Not far along  the trail, we found a sheltered cove out of the wind, an ideal place for lunch. Nam impressed us by sharing his choc and sprinkle dipped strawberries. Certainly a luxury I’ve never had before on a hike!

Eventually we reached the southern fringe of Kiama at Loves Bay. A Kiama Council warning sign at Loves Bay always gives me a laugh, as it seems to want to cover every legal liability the Council wants you to take responsibility for, should you undertake the walk. The dangers include such awful scenarios (all ending in serious injury or death)  as being gored, trampled by cattle or horses, stung by snakes, spiders scorpions, ticks or mites and even being hit by trains! And I had described this walk as “perfect for beginners”!

The walk then clung to the coast in front of houses.  Sometimes it was more interesting to sticky beak on the coastal architecture than just look out to sea. The next attraction was the Little Blowhole, with the nor’easter perfect for creating an impressive display.  Nam and a few others were now keen to get to Kiama’s big blowhole, so we pushed on. The trail becomes a bit harder to follow as it goes through urban streets, but not hard to navigate. Soon we dropped into pretty Easts Beach. It was here that we met up with Lin, who now had to reverse her walk to return with us, but it sounds like she had enjoyed her day regardless.

Another headland was rounded, then we walked down to Kendalls Beach. By now everyone was feeling a bit tired, the kilometres had certainly added up, and we had been walking for around  6 hours. At Surf Beach, the group split up.  Nam’s group went off to see the Kiama blowhole and the rest of us said our farewells at Kiama Station. Everyone seemed to enjoy the walk, and many were surprised at the dramatic coastal scenery on this beautiful coast.   I love the South Coast, and I hope after this trip that everyone else can see why too. Thanks to all who joined, and made it such an enjoyable day.