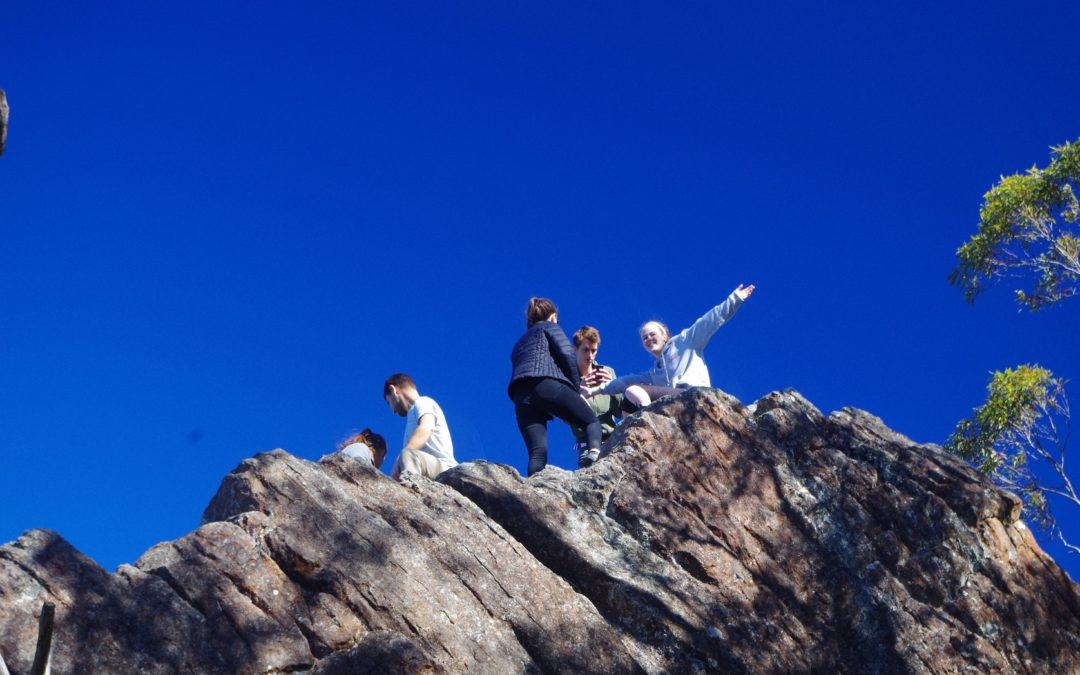 As you can see, a cast of thousands. I had overbooked like the airlines do, expecting a couple of people might drop out on the Saturday evening. As it turned out there was not a single “no show”!

This walk was also on tracks often shunned by tourists, especially Federal Pass beyond the Scenic Railway, so there was little risk of causing a traffic jam on the more popular tracks.

The Constellation of Orion was prominent in the pre-dawn morning sky as I walked to my own station. Orion is a harbinger of summer when it is a feature of our night sky here in summertime. We all met up at Central for an early train to Katoomba, and settled in for the long trip to Katoomba. Passed the Bat colony at Clyde, noting that the bats now have to share their roost with Ibises. No kangaroos at Werrington this time though.

At Katoomba we set off down the road to Katoomba Falls Reserve where there was a loo stop, then on to the start of Furber’s Steps. At Queen Victoria Lookout many of the group got their first view of the Jamison Valley and Mt Solitary, as it was their first ever trip to the Blue Mountains. Then it was down Furber’s Steps proper which are reputedly the third steepest of the Blue Mountains steps, so we were glad we were going down and not up. We passed relatively few tourists who had already gone down and were making hard work of it coming back up.

At the junction of Furber’s Steps and Federal Pass we gathered while I did a head count and then set off right to pass the Scenic Railway terminus with its horde of tourists. Just past all the touristy kitsch (to which more has been added recently I note) the Federal Pass resumes on its way to Mt Solitary. The point where the track departs from the wooden walkway at Scenic Railway can be easily missed. Here I advised people not to stop until I tell them as this is leech territory.

Eventually we reached the rough section of the track as it transverses the Landslide section. Above us the sheer cliff of Malaita Wall loomed over us. Soon we came to a sunny spot and stopped for water and morning tea break. I passed around that Australian culinary icon, Lamingtons, which everyone liked. Some of the girls found a rock which gave them a good perch to be photographed with Narrow Neck as background.

Then it was of again, getting into the shade of Narrow Neck as Federal Pass followed it’s eastern side. We passed Mt Rennie Tunnel where I explained that this is a summer-only trip in a 400 metre tunnel in thigh-high Iron-Oxide stained cold water which will permanently stain anything you wear (and your legs for 2 weeks). And you can’t stand up in it. Maybe a trip for summer – maybe! Mt Rennie Tunnel is an old oil shale tramway tunnel under Narrow Neck.

After more walking we came to the Junction with Golden Stairs and I explained that that was where we were returning afterwards. More walking on the quite level track (as it is an old shale tramway formation) we reached the junction with the steep track to Ruined Castle; there is also a bush dunny (pit toilet) here.

So up the track we went to Ruined Castle, and its steep gradient was good practice for Golden Stairs later on. Soon we arrived at the rock formations which give the place its name, as from Echo Point it looks like a ruined castle. (On past walks some people have expected to see a real castle!).

Here we had lunch, and a rock outcrop with great views back toward the Three Sisters was chosen by many of the group. Then they tried their hand at climbing the biggest rock, which is initially tricky but easier as you go up, and were rewarded with expansive views as far as the Kanangra-Boyd area.

One of the girls found out what happens when you buy a bottled of carbonated sparkling water at sea level, and open it in the Blue Mountains at 1000 metres altitude: it sprayed everywhere!
Also, there were no takers for a piece of my Vegemite sandwich!

After lunch, we returned down the track, and made our way back along Federal Pass until reaching the bottom of Golden Stairs. Along the way we encountered several other groups coming the other way, which puzzled me at first (as it was 2pm by then – which would make them a bit late returning back to Scenic World. I realised though that these people had actually come from the Golden stairs car park, which was not far away. The NPWS sign states that it is a 45 minute walk up it, although the group did it in 25 minutes (but I took a bit longer!). There are view spots along the way giving vistas over Jamison Valley, and closer up, the Landslide. The view spots are also handy as p[laces to stop to recover your breath! Although Golden Stairs are shorter than Furber’s Steps, they are still steep and rather rough in places.

Coming out at Narrow Neck Plateau Trail was a relief and we took the opportunity for a well earned break before continuing along the Trail which is actually a 2km dirt road back to Cliff Drive.

On reaching Cliff Drive, I took the group down the short track called “Short street” to Violet Street and then Scenic World. Using Short “street” cuts off more than 1 km off the walk to Scenic World.

At Scenic World there was another loo stop, and as we had already done enough walking – and from here to Katoomba Station it was all suburban streets – I decided we may as well use the bus service from here to the Railway. Our 26 member group crowded out the next bus which also visited Echp Point on the way back. We reached Katoomba 7 minutes before the next train so people decided to give a coffee stop a miss and get that train home. Apart from Han Yu who got off at Strathfield, the rest of us continued to Central where we all said our goodbyes. This was an enjoyable walk in fine cold weather, and the Blue Mountain views were a revelation to those for whom it was their first visit there. Note in the photos the cirrus clouds which usually predict rain in 1-2 day’s time. This indeed what did happen in the Mountains the next day (and snow in Oberon and Crookwell). It was also a good introduction for the new members to what are typical Australian bush tracks.