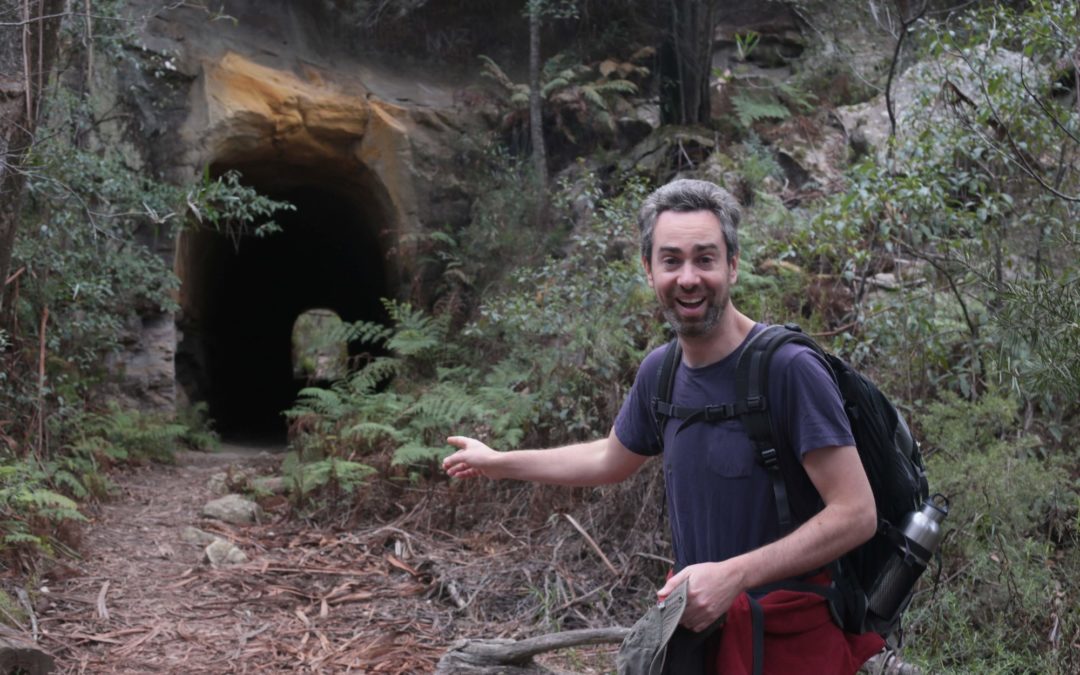 The Southern Highlands contain some nice bushwalks of all grades, and can get you into some quite wild country, yet still close to civilization. One of my favourites is the Box Vale track just outside of Mittagong. It has a number of highlights along the way, with just enough challenge for beginners to get some experience without getting too epic. A total 5 people had signed up for this walk but due to various circumstances, I only ended up with one member , Martin, who had already done it some years ago.  But “Press on Regardless” we did, and had a very enjoyable day doing the 11km circuit .

The forecast had been for rain and cold temperatures, but the day turned out quite warm and sunny for much of the time. We began following the old tramway through pleasant forest, occasionally passing through old , overgrown cuttings. At one point the trail passes through an old sandstone tunnel , a lovely feature of this walk. Not long after, the Nattai Gorge lookout was reached where we had morning tea in the sun. There were good views down the Nattai valley which contains some very wild country.

Then we retraced our steps a bit, taking a shortcut around an old mining slag heap, then getting onto the “incline”. This is an extremely steep cable assisted downclimb to the valley that was used as a cable tramway. It’s very much like the “Scenic Railway”  in Katoomba but without the tourism.

We took care on the slippery slope down, which doesn’t take long, but you have to watch your step. A side creek at the bottom led into the Nattai River where we crossed the river at a deep waterhole. After skipping a few stones across the pool, we continued upstream along a much rougher track that requires some concentration in route finding. The cool rainforest in the deep gorge made for enjoyable walking. An interesting water worn stone arch with nice markings was passed through, before we had lunch at a sunny spot beside the river.

Later, we continued crossing the river a second time and followed it upstream to another side stream where the track has a junction. This led us over a natural stone bridge, then onto to the 40 Foot Falls which have a great overhang and cave where you can enjoy looking at the falls from behind. Then the hill climb began in earnest up out of the gorge, even using some ladders in places, but nowhere near as difficult as the incline down.

A few spots of rain fell for a few minutes but not even enough to warrant putting on a rain jacket. We finished the walk about 5 hours from the start.

Thanks to Martin for his good company.  It  was a good way to spend a Saturday in one of my favourite parts of the upper Nattai valley.