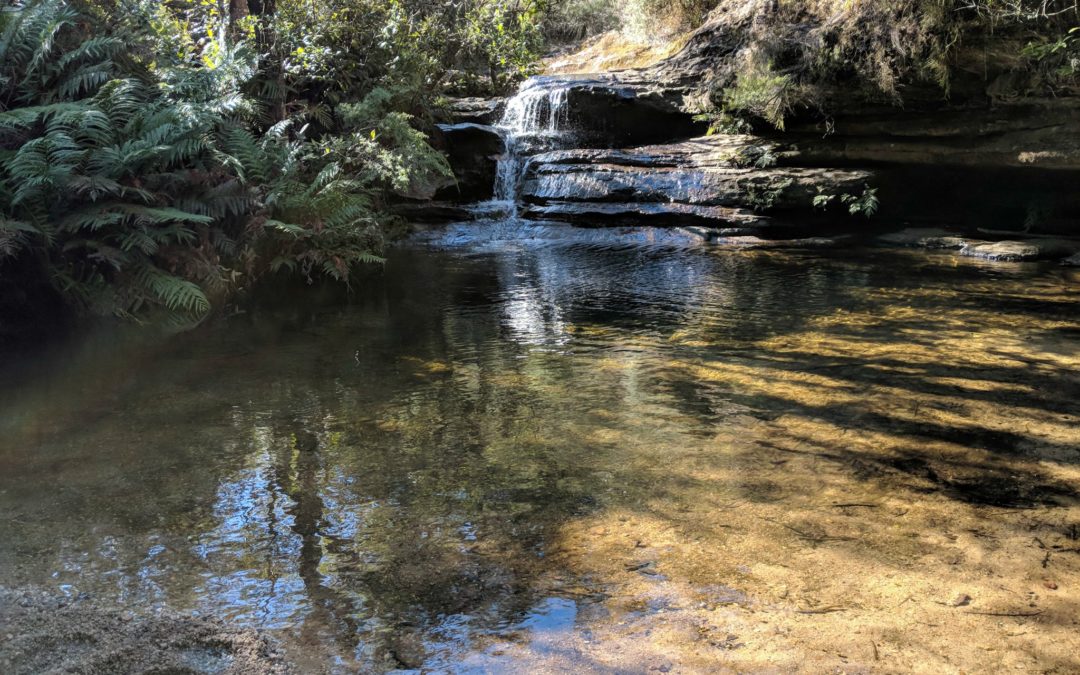 I was late putting this trip on the calendar so was pleasantly surprised to have Penny keen for a 2 night trip in the middle of winter and with only 3 days’ notice!

The forecast was for 10 degree days getting down to -1 at night with winds ranging from 20-40km/h.  So we knew the trip would be a bit more challenging than normal.

Walking along the Grose Valley from Mount Victoria to Blackheath over 2 ½ days is fairly leisurely and so it was fortuitous that we had time up our sleeve when confronted by significant train delays at Central on the Sunday morning.  Compounding the signal delays, we had an incident onboard where the guard fell out of the train as it was pulling up to Westmead station. Poor guy! Due to that injury we needed to change trains. Eventually arriving at Mount Victoria station around 12.40pm well over an hour later than scheduled.

A quick coffee and a sausage roll at the local deli and we were on our way along the fire trail to Victoria Falls lookout. Descending the track down into the valley and passing a number of day trippers returning from their bushwalks.  We check out the silver cascades and a little further on the awesome rock formations carved by the water from the main falls. I was looking for a way to reach Asgard Brook as a source of more pristine water but alas was confronted with more creek scrub than I was prepared to deal with, so we ended up filtering from Victoria Creek.

Reaching our camp site a bit before 4pm, we made preparations for a chilly and cloudless night. Thankfully our camp was protected by surrounding hills so we were spared the forecasted wind.

One advantage of the cloudless sky was a good opportunity for star gazing. Penny came armed with astronomy knowledge and a great app that predicted the tracks of overhead satellites and the International Space station. So we had a great time finding objects in the sky.

Heading to our tents at around 8.30pm, it was time to bulk add clothing and fluff up the sleeping bags. It was a cold night, thankfully my sleeping bag was up to the task but I wished I had brought a balaclava for my face!  The next morning frost on the grass revealed it had been as cold as it felt!

Monday morning was quite unhurried, neither of us in a great rush to leave the warmth of our sleeping bags.  Once moving, we found the trail quite open and free of branches. We stopped at Crayfish Creek which is one of the more pristine sources of fresh water in the mountains to refill our bottles.  It was a pleasant and sunny day, cool but great for walking. Morning tea was spent relaxing on the rocks near Pierces Pass and then lunch at Little Blue Gum where we spent 40 mins lazing on the grass in the sun. Haha I mentioned that doing this trip over two nights was leisurely!

Our 2nd nights camp at Acacia Flat was virtually empty with only one other party at the site, which is a nice bonus for doing the trip during the weekday. The forecast was for 40km/h winds so we pitched our tents away from any overhanging branches growing from the towering gum trees that are a feature of Acacia Flat. After dinner Penny surprised by pulling a large block of chocolate out of her pack and sharing, which was much appreciated. This night was warmer a relatively balmy 3 degrees! And even better the forecasted wind never arrived… or maybe the valley protected us from the wind.. either way we were glad for the warmer and calm night.

The next morning, we headed up the valley, stopping at Orangutan Creek for fresh water and began our accent towards Govetts Leap. Despite having walked this many times, my legs still groan each time I plod up the 600m metres to the top. Luckily there are some awesome waterfalls and rainforesty sections to make the climb worth it.

We had lunch at the base of Bridal Veil Falls and then the final climb up the many steps to Govetts Leap.  At the top it was a quick journey along the Popes Glen track to Blackheath and the New Ivanhoe Pub for a well deserved beer!  On the train by 3pm we looked back on a great 3 days in the Mountains.