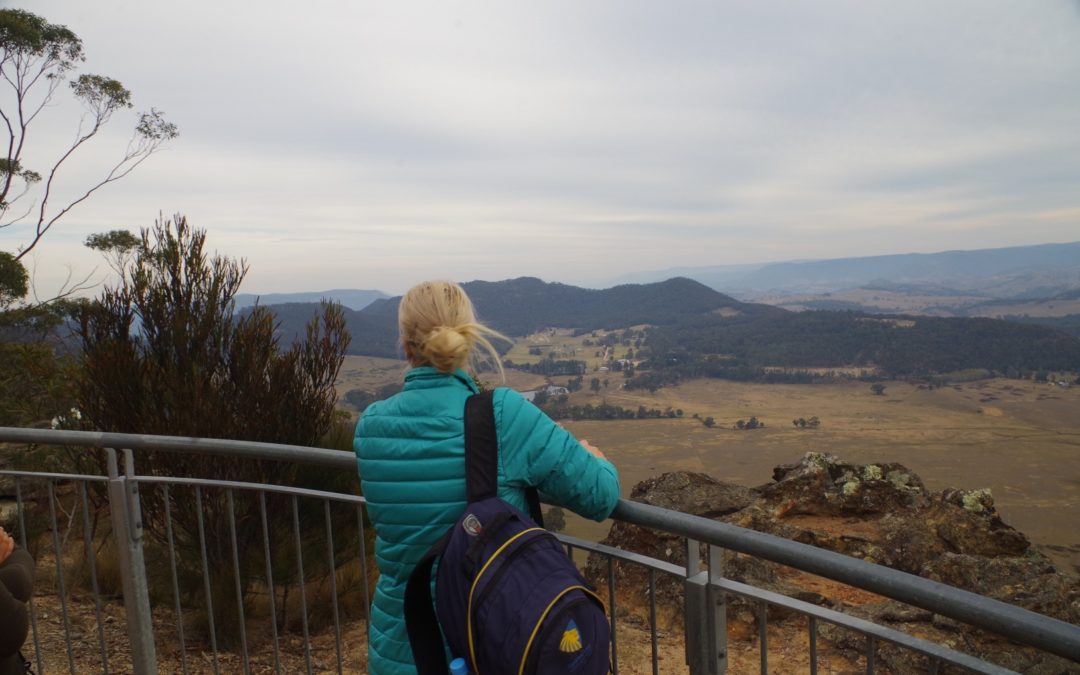 A very interesting trip with lots of unusual things to see: Kangaroos, sheep, a Black Chook, horses, bats, a steam loco, and something very rare: a steam-powered road traction engine.

After gathering most of the team together at Central Station, we settled in for the long train ride to Mt Victoria, spotting the bat colony at Clyde on the way. On arrival at Mt Victoria the station was very much busier than normal, as it was the great train weekend”. It marked the 150th anniversary of the first train to Mt Victoria in 1868.”Great train weekend” was a bit of an overstatement as there was one 1950’s steam loco and some rail motors, and that was it. The steam train departed soon after we arrived. We met up with Nathalie and Ansura who had driven up.

The queue for the toilets by the visiting throng caused some delay starting the walk but we eventually got going and headed for Mt York Road via the Great Western Highway. We turned into Mt York Road but then shortly into the unfortunately-named Closeburn Drive (some houses on that street burned down in the 2013 big bushfire), and then left into Berghofer Drive which is actually the top portion of Berghofer’s Pass, the second most recent attempt to cross the western slope of the Blue Mountains (1909). This part of Berghofer’s Pass is still a dirt Road, but after crossing Mt York Road it becomes a walking and bicycle track.

Where Berghofer Drive meets Mt York Road is also the trackhead of Lawson’s Long Alley, which was the third (1823) attempt of a road down the Western escarpment. There was a false start as we took a track down the slope which suddenly ended at a power pylon, so it was a matter of finding the right track which we quickly did. This track drops down into the valley of Kerosene Creek and more or less follows it into Hartley Vale. (The valley has also been called Petrolea Vale). Once it levels off it meanders through the wide valley and does some short climbs to by-pass private property. It was on this section where we first saw some Kangaroos. A group of 4 eyed us carefully from a distance. Then a bit further along the people at the head of the group startled two Kangaroos which were grazing beside the track. They hopped off before the people at the tail end could see them.

Then the track rejoins a dirt road (still part of Lawson’s Long Alley), and there Claudia slipped on some loose gravel on the road at a slight descent and grazed her knee. This required a stop for first aid to clean it and dress it. Claudia was holding a half-eaten banana in her hand at the time and that might have been just enough to cause her to be that little bit extra out of balance (we sometimes forget that we use all 4 limbs when mobilising, even if we are not using our hands).

Soon we came to the end of this dirt road, passing by some grass and scrub-topped hillocks that are most likely mine tailings from the old Hartley Vale Oil Shale workings that were there from 1885 to 1921. There are signs surrounding them saying “no trespassing” which is probably just as well as the tailings are very likely loaded with heavy metals like Arsenic and Cadmium. Perhaps best not to drink the water of Kerosene Creek downstream from here! I suppose the very name, “Kerosene Crteek”, would be off-putting anyway. (In fact William Lawson – who built Lawson’s Long Alley, first noticed oil shale there in 1823 while the Alley was being constructed, but mistook it for coal. A sample was sent to Paris in 1854 where it was realised what it actually was).

At the end of the dirt road where it meets Hartley Vale Road, there is a farm with some sheep and horses, and ducks (none of which asked for money – “coin coin” – as the ducks are not French). In the front of the 1879 “Comet Inn” (now a B & B, no longer a pub) there was a Black Chook.

Further up the road we came to the track heads of Cox’s Road and Lockyers Road where there is a picnic area – and pit toilets. This was our lunch spot. Claudia had another change of wound dressings here. This is a nice quiet spot, and during the half-hour we there there only three cars came along Hartley Vale Road.

After lunch we set off up Cox’s Road track, with Lockyer’s Track branching off after about 500 metres along. The track undulates gently for almost 2km then starts to rise steeply up the slope of Mt York. Along this section a stile is used to cross a fence, a structure quite common on tracks in England but rare here. After a while the track starts to rise much more steeply as it follows the original Cox’s Road up the side of Mt York. It climbs from 870 metres elevation to 1070 metres (at Mt York) in just 1.3km. That’s a gradient of 1 in 4, and it’s incredible that in 1814 Oxen and wagons were taken up and down this! It is certainly a hard slog going up and a few rest stops along the way were taken. At some places the excavations in the rocks made by convicts can still be clearly seen.

Eventually we reached the top and a rest was made to take in the view of Hartley Vale. Then on to the track which parallels Mt York Road back to Lockyer’s Trackhead. Along the way we stopped briefly at Barden Lookout which normally gives a great view over to Hampton and Megalong Valley. This day however the view was somewhat shrouded in haze from the several hazard reduction burns going on in the Blue Mountains.

From Lockyer’s Trackhead the track meanders and at one point follows high tension power lines before coming out at Lawson’s Trackhead, where we had started earlier. Form there it was a matter of following Berghofer’s Drive, and then getting back onto Mt York Road.

It was here that we encountered a very rare sight: a steam-powered road traction engine coming along Mt York Road. Obviously it had been an attraction at the “Great Train weekend”, although we didn’t see it there earlier. It tooted at us as it went past, making a loud clunking sound with its huge iron wheels.

By this time train departure time was getting close, and I wanted to get the 4.02pm train as it would get us to Sydney 35 minutes ahead of the next train at 4.18pm. (That would make a significant difference for some people). We got to Mt Victoria Station just as the train was pulling in to the platform, and made it over the bridge and onto it just in time.

Everyone seemed to enjoy the walk which was done in mostly sunny weather and not too cold (although it got cloudy and cool after we left Mt York). The overseas students saw wild Kangaroos – as promised –  and the farm animals were of interest too.

Oh, and a slight correction to a typo in my circular mail about “Advising potential members about SUBW walks”. The third paragraph should read: “If anyone inquires to you about going on a walk, refer them to the SUBW website. It’s really easy, they just need to put SUBW into Google and the Club links will come up (etc).”