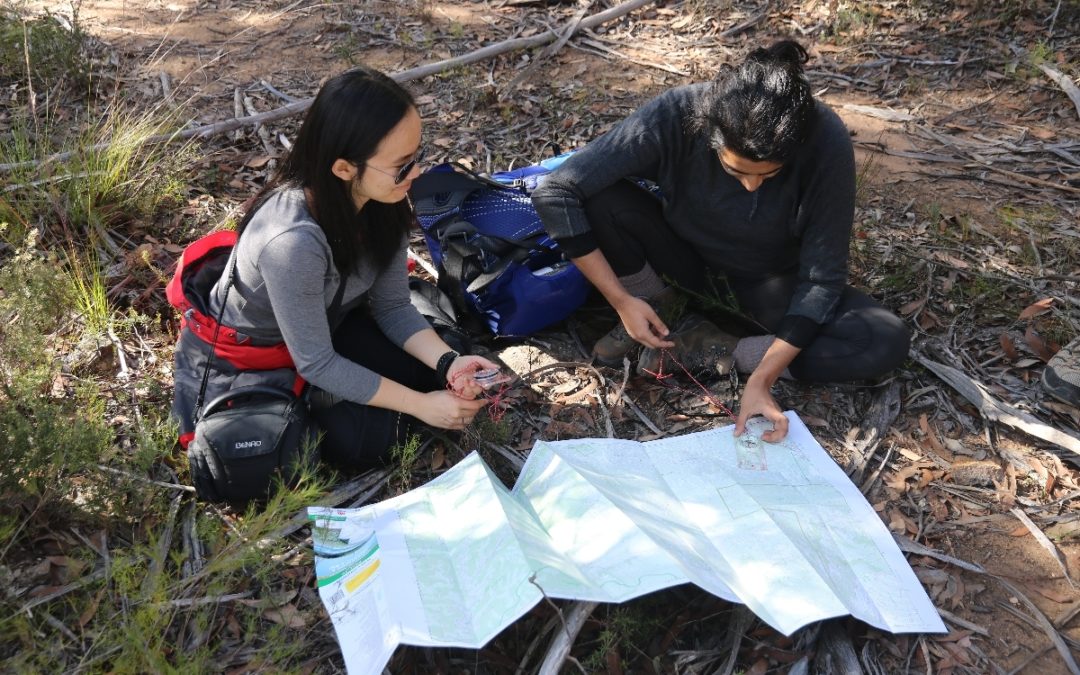 Wow! There is no doubt this trip is one of the most popular SUBW trips of the year. I had 36 people sign up before I managed to mark the trip as full. You really can’t take more than 20 at the absolute maximum and in the end it was 21 people including myself who presented.

This year’s navigation weekend was the 13th that I have run through the club, and so is now a SUBW tradition going back 13 years. Yet it was a first too, because never before has the SUBW navigation weekend coincided with a royal wedding. Our humble gathering of bushwalkers in the Wollangambe wilderness fell rather short in terms of formality, aplomb, and not to mention dress code of the royal couple, yet nonetheless was auspicious enough.

Back to the actual trip report, which starts at Bell railway station at 9am on Saturday morning, with about half the group arriving by car and the other half by train. The weather was crystal clear and cold. The huge group huddled around maps and they learned the basics of map reading, grid references and how to orientate the map and read contours. We were just about finished when another train arrived, with Joseph on it, our final participant making the turnout complete with no “no shows”.

Then we headed off, and for the first time on the SUBW navigation weekend, the trip was run in the reverse direction to previous years. We walked along a road and then ducked into the bush and as soon as we reached the national park boundary we stopped to scrutinize maps and set compass bearings for our route down to the Wollangambe River. For lunch we reached a rock platform with superb panoramic views over the surrounding area. This superb lunch spot was the perfect spot to do some map and compass work.  The group learned to use the compass to identify surrounding peaks and to find them on the map. It was also a great place to learn contour interpretation.

By the end of lunch, a set of bearings was set for the Wollangambe River and away we went. The next thing to learn was how to follow a ridge or spur and stay on it, and how to know when it is time to change bearings. We soon reached the river, crossed it, climbed out the other side and set new bearings to our campsite.

As we approached the campsite we heard – yes – voices. We were not alone. As it turned out, our group of 21 added to an already burgeoning group of people ensconced at our huge camp cave. There was a scout group there, plus about 3 or 4 venturers who had a doof box blaring, and then a family with young children who had mistakenly selected this camp cave as the location for their quiet family camping weekend. I think it would have been over 30 people in the cave that night. We laid down our packs and clambered up to watch the sun go down over the swampy crater and to get away from the noise and crowds of the cavern. There in the relative peace of a late autumn afternoon, the sun bathed the intricate pagodas in soft orange light, and the light caught the silvery bark of small trees and the dead branches of those left behind by the bushfire 5 years ago. This was a time to take photos and sit atop one of the many pagodas in the area. We filled water bottles and headed back to the cave where the doof was still doofing and kids were eating and tents were going up all over the place. Eventually I managed to produce a cup of tea and from then on things improved. The melee gradually subsided with the different groups finding their own area to gather, and at some point the doofing thing was turned off. We settled down to some campfire chats and later a group of us headed back up to inspect the stars. The moon had set so it was a dark night with a dense multitude of stars forming a beautiful spread. Prominent were the Southern Cross and the planet of Jupiter. A few people exclaimed when they saw shooting stars.

Next morning we got a fire going and had tea and breakfasts, many of the beginners said the night was very cold and they had had trouble sleeping. A warm fire soon helped this, and it promised to be another perfect day and soon we would be out in the sunshine. The scouts, venturers and the family groups headed off before us and then I inspected the cave and the surrounding area. There was toilet paper and worse scattered around and an unpleasant cleanup job needed to be done. With that dealt with, the cave looked a little more back to normal and free of any rubbish. We headed out into the sun for the day’s first map lesson. I told the group where our next objective would be, and the group studied the map and planned a set of bearings to get there. Compasses were set and off we went.

We emerged after a couple of bearings onto a fire trail to prove that yes, the map and compass do actually work! We continued like this all the way back to the Wollangambe River, following a series of new bearings that had us crossing the river further downstream. There was a steep descent and ascent and then we reached The Centre Of The Universe (994) for a very pleasant lunch. Here were the last expansive views we would have and another great opportunity for the beginners to practise using the compass to work out our location, do back bearings to see where we had come from, and to identify surrounding landmarks. The scout and venturer group caught up with us here even though they had started before us – they must have come in via a new and different route …. A navigational error perhaps.

Many of the beginners needed to get the train at 16:08 so we set off on what was now a reasonable walking path back to Bell. We stopped occasionally to practise map reading and contour interpretation, and by now the principles of navigation had “clicked” inside people’s heads.

We got back to Bell station with about 20 minutes’ spare before the train arrived, so there was plenty of time to unwind and bid farewell to those who had come by car, return gear etc.

All in all another great SUBW navigation weekend in a special part of the Blue Mountains.