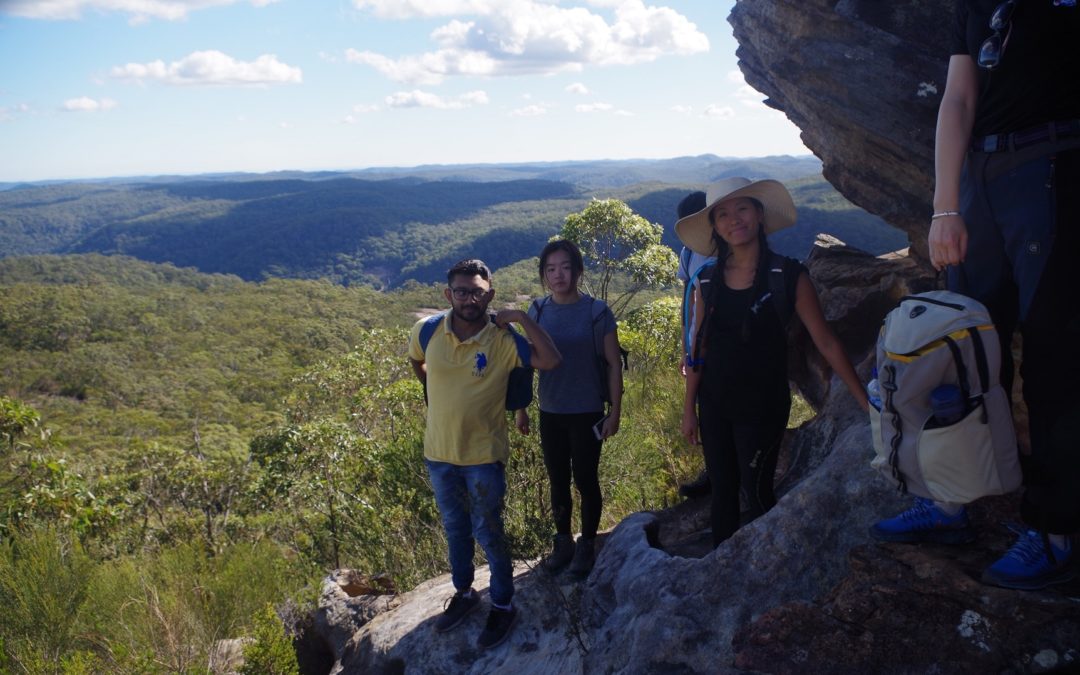 With trackwork on the Blue Mountains Line that weekend, and a late arrival of cooler autumn weather, the time was good for a walk to Mt Wondabyne.

We all met up off the train at Wondabyne Station, although one person very nearly missed out because she mis-interpreted “last” car to mean the lead car of the train. Fortunately it was a four car train so she was able to walk through to the end car to get off, thanks also to a patient train guard. (If it had been an 8 car train she would have missed out).

So after a brief talk to be aware of snakes, we set off up the steep climb which takes the track to the top of the ridge overlooking Wondabyne and Mullet Creek. There it joins a fire trail which continues on for a while until meeting up with the Great North Walk (GNW) coming down from Girrakool. From there went went right and continued along the GNW which is now a bush track, fairly rough in places. It crossed wide and long rock platforms, common in this region. I noticed that all the way we were being followed by Wattle Birds with their distinctive call. There were still quite a few Banksia flowers still out, on which they like to feed for pollen and nectar. We dropped down to Myron Brook on a steep track, but only stopped briefly at the brook as it is the only place on the walk where leeches are possible.

The the track rose again then dropped down to Kariong Creek with its pool and waterfall. Despite there being some heavy rain the week before last, the waterfall was hardly running at all, showing that in the present dry conditions most rain is just being absorbed by the soil. The pool also had just a slight whiff about it, and I advised two young guys there (not part of our group) that swimming is not recommended as there is a scout camp upstream (and the water definitely not for drinking!).

From Kariong the track rises steeply again until reaching a clearing which appears to be used as a campsite. Indeed there was the remains of a camp fire still there. Then the track joins a wide fire trail which in one direction goes to Staples Lookout on Woy Woy Road, and the other heads towards Patonga. We continued on that for a while then branched off on a bush track taking us over more wide rock platforms. On one of these there are Aborigines’ tool-sharpening grooves, not obvious (and not signposted), easy to miss if you are not looking out. Continuing on, the track passes over damp ground (Tiger snakes’ preferred habitat) until reaching Mullet Creek Track, a wide fire trail/railway access track. Just before this we crossed over a small brook which contained some tadpoles. Just a short walk along the Mullet Creek track takes us to the left turn onto the GNW section which skirts Mt Wondabyne. This rises reasonably gradually but is quite stony underfoot – can be a bit hard on Volleys. Along the way there is a NPWS log book, which we filled out, and Elodie made a comment in the French-Canadian dialect. The track starts to level out just before the side track to Mt Wondabyne, and the views from this height were already evident. The side track to the peak goes up fairly steeply and there is one tricky bit that can be by-passed by turning left beside a rock overhang which appears to be used as a campsite (has a fireplace with a frying pan, which appears to be a fixture as both were there on this walk last year). On reaching the summit with its trig, we found the sun to be a bit too strong still to be sitting in the open for lunch. Kewal suggested going back down a little bit to a spot we had passed which provided shade. So we did that and found it to be a good shady spot, but still with views. From the top, the ocean can be seen to the east, as well as the Blue Mountains faintly to the west. North provided a view over Brisbane Water and Woy Woy.

Prior to reaching Mt Wondabyne I was considering whether to continue on to Pearl Beach via the GNW instead of retracing our steps back to Wondabyne Station. This would all depend on when we reached Mt Wondabyne and how long we would stay there for lunch. As it turned out, we had finished lunch by 12.35pm which meant that the option of continuing to Pearl Beach was possible. The track there is not quite as interesting as waht we had already done, as it passes for quite a while through open scrub and heath. It is also almost 3 km longer. An advantage though is the absence of rough steep grades like the one rising back out of Myron Brook.

So set off again eastwards along the GNW following the signs which said “Patonga”, and a few others which are just small GNW plaques. This track crosses more long and wide rock platforms until reaching the edge of Woy Woy garbage tip, which now has a high security fence around it. We had just a brief stop there as it was a bit whiffy, but there were several black Ravens up in the trees saying “aaarrkk, aaarrkk, aaarrkk” to us. Shortly after there is a steep drop down to Patonga Creek which has several Cabbage Tree Palms (native to the NSW coast). I noted that the creek had tadpoles in it (see photo). Then a steep short climb out until reaching a wide fire trail. This took us through open country with occasional Sydney red Gums but mainly heath (with those Wattle Birds still with us). Eventually it reaches Patonga Road which we crossed, then followed a track which parallels the road until coming to the side road to Warrah Lookout, which we followed. This is over a kilometre of boring road bash, only relieved by occasional views over Broken Bay to the north. We reached Warrah Trig then Warrah Lookout which has great views over the Hawkesbury River and to Palm Beach.

here we had a break, and I decided to check the bus departure time from Pearl Beach. To my surprise the bus departure there had been brought forward by 15 minutes (probably due to the recent changes to the train times at Woy Woy). So we thus had only 35 minutes to get from Warrah Lookout to Pearl Beach instead of a leisurely 50 minutes! I therefore got everyone up and we walked down the Pearl Beach Fire Trail (now no longer were we on the GNW) which fortunately is downhill from there all the way. We reached Pearl Beach with 10 minutes to spare which gave some people a bit of time to use the toilets and also Sophie to do a short paddle in the surf.

We all got on the bus and ended back at Woy Woy Station with 12 minutes before the Sydney train, which was also the same train which we would have get if we had went back to Wondabyne Station instead of Pearl Beach.

Everyone liked the walk, and Madeleine commented that going to Pearl Beach added a bit more interesting variety to the walk. It also meant that we didn’t spend 40 or more minutes sitting on Wondabyne Station in the chilly late afternoon air waiting for the once-hourly train there.

The weather was good too. It was forecast mostly sunny at 22 degrees C and it stayed that way for the day until the late afternoon when we had to put extra clothes on.