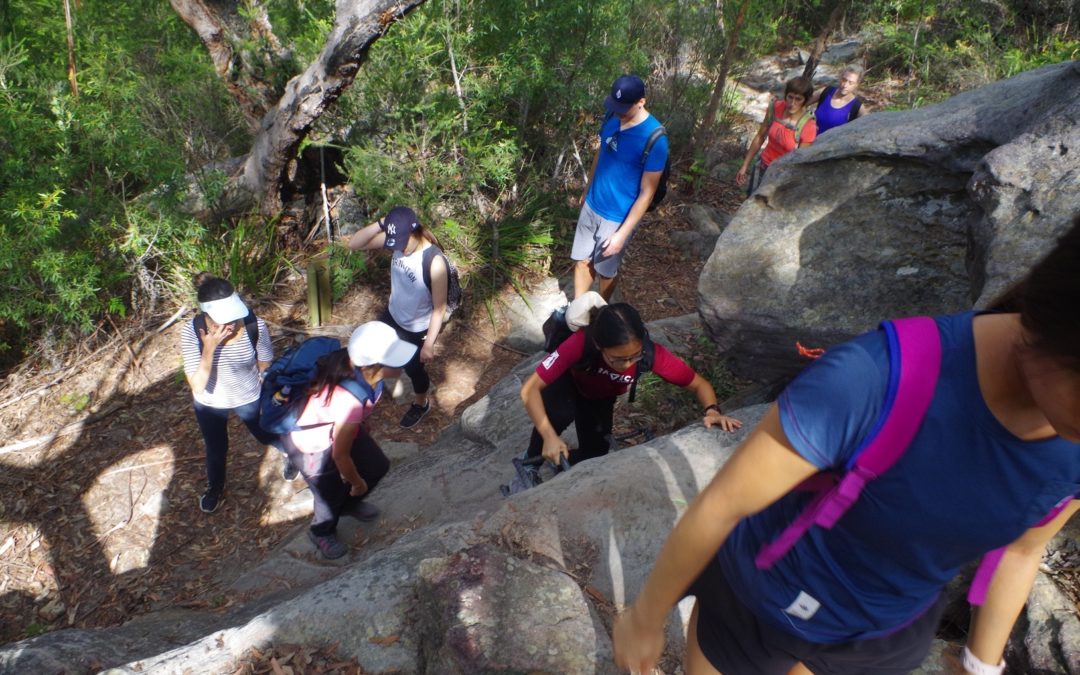 11 of the group met up at Cowan Station (9 off trains, and Nathalie and Matthias driving there). Meanwhile, I had been sending messages to Anja and Sofie who had missed the train at Central. Anja missed it by seconds, and Sofie had got on a bus which took her in the wrong direction. After several texts and calls, they arranged to meet up for a later train to Hawkesbury River Station to start the walk at that end, and we would eventually meet up with them, somewhere along the walk.

Meanwhile, the rest of us set off along the Great North Walk down to Jerusalem Bay. The track is quite straightforward with a few rough sections, and follows a creek to Jerusalem Bay. It is a pretty spot and if there is a high tide it is possible to swim here (it was low tide this morning though). I decided to allow only a short water break and then push on along the upper shores of the Bay, through a mossy gully (which is also the only place on this walk where there might be leeches), and then commence the rather steep climb up the ridge on the other side. This is short but quite steep, and it seems that recently new steps and a couple of hand rails have been put in by National Parks.

Two-thirds of the way up the ridge there is a flat section with a seat, and here we had our first good break. I passed round ANZAC biscuits to everyone. (Historical note: these biscuits – made of oats and Golden Syrup – were baked at home and sent to Australian troops in the Middle East during World War 1.  They are now often sold by supermarkets in the period before ANZAC Day (April 25).

Then we continued the climb, which for this section was now less steep, then flattens out for a while before descending the ridge down to Campbell’s Creek. This was running very clear this day, but as it arises near the M1 Motorway, can’t be guaranteed to be free of vehicle-derived pollutants.

After Campbell’s Creek, the track starts to rise again, at first gradually, then more steeply until reaching a long Rock platform requiring a very short scramble to get onto it. After then the track stays level, passing through shady woodland until starting to rise again. There is a sort of mini Taro’s ladder at the end of the climb made of steel steps (see photo). Then the track finally leaves the woodland which up to now shaded it, and into open heath. At this point I got a phone call from Sofie saying that she and Anja were having trouble finding the start of the Great North Walk (GNW) at the Brooklyn end. When I tried to check “Google Maps” on my iPhone it was annoying to find that the GNW is not shown on the phone map (unlike on PC’s). I guessed that it must start at the end of William Street so I directed them there. They did eventually find it.

Where the bush track meets the ridge-top fire trail, there is a National Parks log book there which we signed, and I got Tibor and Pegah to write comments in Hungarian and Farsi, to confuse the NPWS staff!

Then we started along the wide rail access track (which actually was formerly access to Boronia 1 and 2 tunnels, now a fire trail), which goes on undulating gently for about 2 km before starting to drop down on a series of loops to get to Brooklyn Dam. Before starting on the downhill section, we took a short side track to a lunch spot giving good views over Long Island and the Hawkesbury River.

We had a good half-hour break and I got out a little solar-powered  fan I was experimenting with to keep flies off my lunch. It is a little exhaust fan salvaged from an old computer, with a little solar panel from a garden light. The panel only provides 6 volts but the fan runs on 12 volts so it was a bit underpowered. And there were no flies to keep away, but quite a few ants, against which the fan is useless. Still, the fan and solar panel are very light, so adds very little weight to a pack.

After lunch, and admiring the view there, we set off down the track which descends by a series of loops towards Brooklyn Dam. About 1 km further on we at last met up with Anja and Sofie coming the other way, having started from Brooklyn. I told them that there was some good news in that they did not need to totally retrace their steps, as after Brooklyn Dam I would be going down the old track to Brooklyn (they had come up the present “official” track which goes up the steep concrete Railcorp road in the first section).

So we all (being 13 walkers now) continued along the track until reaching the short-cut which took us through a camp ground and beside the wall of Brooklyn Dam, crossing a small outlet creek on the way. After a brief stop at the Dam, we continued along the final climb along the track which is also a fire trail, so it is wide and not all that steep. Eventually we reached the junction of the Great North Walk and the old track down to Brooklyn, which is no longer part of the Walk, and also not repaired now. (If you have not done this old track before, I recommend you don’t do it from this end and ether are several deceptive side tracks which end up as dead ends. The track is more obvious when starting from Brooklyn). So we descended along the old track, which drops down fairly steeply at times, with loose gravel underfoot, so care needs to be taken not to slip. An old partly rotted post near a overhang shows where the bush track leaves the fire trail and drops down to eventually come out next to the road beside the railway about 250 metres north of the railway station.

At this point, two of our walkers decided to get an earlier train back to Sydney and left us, and so the remaining 11 set off along the 400 metre road bash to Brooklyn Park and its war memorial. Along the way Anja found the architecture of the mix of small houses along the way fascinating, which shows that the attractions of a walk aren’t always limited to the bushland.

We reached the park where several of the group took advantage of the toilets there, while some played on the playground equipment there! Then we continued through the park until coming to the War Memorial and that’s when the group found out why the walk was called the “Red Baron” walk.

(Warning: historical section): The “Red Baron” was Manfred von Richthofen, a German Army “ace” pilot in World War 1, who became a legend in his lifetime both in Germany and here. His story is better known in Australia than in Germany now, curiously. On 21st April 1918 – that is, 100 years and one day ago from this walk, he was fatally shot down after flying low over Australian lines in northern France. Although he managed to land his plane he died soon afterward. For a long time there has been controversy about who fired the fatal shot, it is generally accepted now that it was by Australian Ground troops. At one stage a soldier, Robert Buie of Brooklyn, made a claim for than but it is now discounted. Even so, Hornsby Shire has placed a plaque in memorial to Robert Buie and Manfred von Richthofen in this park (see photos). In the past few days there have been several news stories locally about the Red Baron. See: http://www.abc.net.au/news/2018-04-21/did-cedric-popkin-of-tyalgum-kill-the-red-baron/9682198 It has a video. Also, the Australian War Memorial’s link to the Red Baron: https://www.awm.gov.au/visit/exhibitions/1918/people/rbaron

Actually, our walk was on the actual Centenary, given the 10 hour time difference between Australia and France.

But back to the walk: After visiting the memorial, we went on to the boardwalk which runs for about 250 metres along the foreshore of the Hawkesbury through the Mangroves. Although it was high tide we didn’t see any fish but did see a white heron.

Finally it was back to Brooklyn, and along the way some of our group took photos of a very tall cactus growing in the front of a hose on Brooklyn Road which fascinated them (we locals often overlook how exotic some of our plants are to overseas students; it’s not just the animals).

We ended up at the “Angler’s Rest” hotel for some well-earned drinks. Then it was off to the railway station for our trains home. Mine came first, so we all said goodbye and went our ways.

It was an interesting walk in good weather (we had a cool breeze for much of the way) and even some luck for Anja and Sofie in being able to rescue part of the walk after missing the train (they also missed out on the hardest parts of the walk!).

There was, however, one outright “no show”.