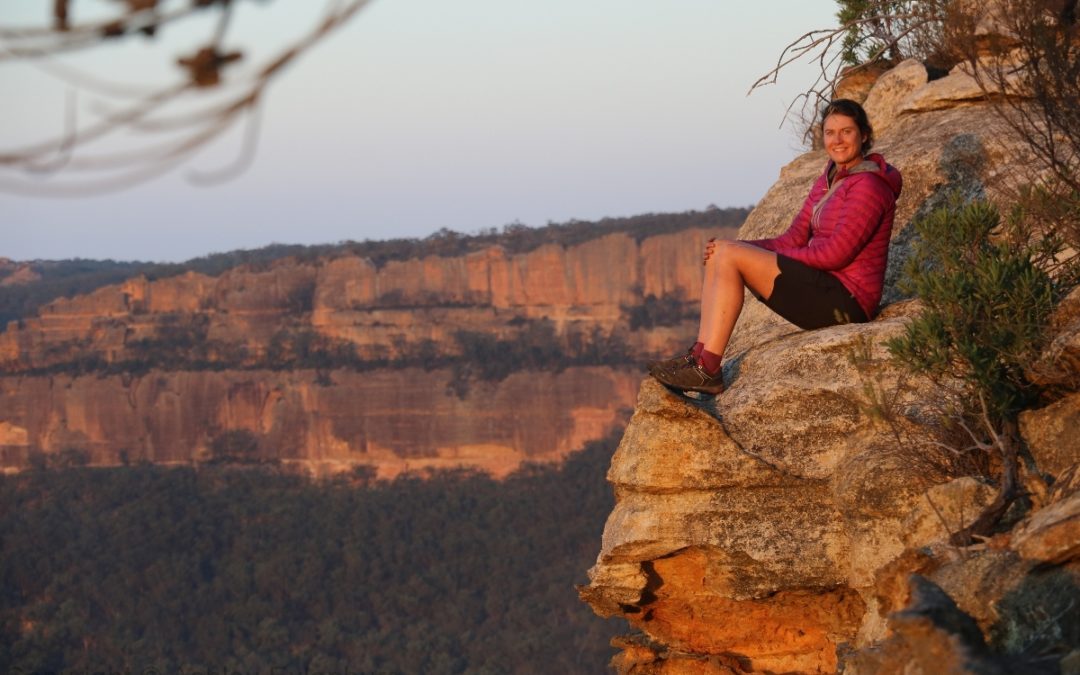 If you don’t believe me, just ask the people on it:

“The pics are amazing and the trip was unforgettable—great leader and great company! Hope to see you all soon on future trips, or even sooner at the gear night:)”

“This is one of my favourite trips in the Blue mountains to date. I really appreciate Ashley’s generosity, excellent navigational skills and sense of humour to guide us through this amazing landscape. The company of everyone and the leader has made this, in the words of Leo, an unforgettable trip.”

“Thanks for leading this amazing trip! My Easter really well spent! It was great to know all of you!”

“I second everything. Had an absolutely excellent time. Really hope to be on another trip with you all in the future.”

That kind of sums it up.

My only regret about the weekend was that I could only take so few out of the 20 or so people who signed up to the trip. The lack of suitable cars for the rough 4WD tracks meant that many people had to be turned away, and only a small group of at most 6 people could be squeezed into my Forester for the slow and bumpy ride on rough dirt roads to our parking place a few kilometres from Baal Bone Gap.

The trip began as many Pantoneys Crown trips do, at Lithgow Maccas. That’s where the 6th person, Emilie, was squeezed into my already rather full car for the last leg of the journey. So after a long evening of travel we reached our parking spot on the Great Dividing Range and pitched tents near the cars on a very warm Maundy Thursday evening.

The next morning began as every morning on a Blue Mountains bushwalk should, with a cup of tea. It was already very warm as we set off by foot along a very rough and steep 4WD trail, and we were already hot and thirsty by the time we reached the pressure reducing station at Baal Bone Gap. This was the last sure water source for the next couple of days so we filled our bottles to the maximum that everyone could comfortably carry. The park ranger was parked at Baal Bone Gap and he came over for a chat.

The walking from Baal Bone Gap to Baal Bone Point was spectacular, with views of the Blue Rocks, Red Rocks, Pantoneys Crown and the Wollemi Wilderness far away on the other side of the Capertee Valley. It was quite warm with a dry wind blowing and we made heavy inroads into our already dwindling water supply. By the time we stopped for lunch in a shady spot not far from Baal Bone Point we had already consumed about a litre each. At lunch, Candice consumed an entire tin of salmon and not much to go with it, and then later in the afternoon confessed to not feeling very well.

There were some spectacular views from Baal Bone Point itself, and the rope was used for pack passing for the steep descent off here. Ahead loomed Pantoneys Crown, the prospect of a steep hot climb to get to the summit plateau, but the promise of a nice campsite once we got there. It was gentle walking at first, but the looming cliffs drew closer and sooner or later we would need to toil that steep slope. It became steep and hot climbing until at last we reached the base of sheer cliffs, and I declared to the group that at last we had managed to climb all the way to the bottom of the steep bit.

Then began the rock scrambling. From the bottom it looked harder than it is, although it was very steep. Some airy rock scrambling sections, then a ledge with a stunning view, and then finally we emerged on the plateau of Pantoneys Crown itself. The views were stupendous and not far away was a cool shady campsite. We put up tents and Savannah and Candice stayed at camp while the rest of us went in search of water. Fortunately we didn’t return with empty bottles, although they were filled with rather stagnant and muddy water, decidedly brown in colour. But at least it was wet. It would do for tea and cooking dinner, and allowed us to keep our dwindling supply of clean clear water for drinking the following day.

Joseph had developed some painful blisters, and time at camp would be utilized to air them, clean them and tape them up. He hobbled around the camp on what were very sore feet.

After our long and fortunately fruitful search for dirty water there was just enough time left to go to the many vantage points to witness the spectacular fiery sunset, with its soft and long evening rays of sunshine burnishing the landscape in golden green and orange hues.

We were all fairly tired so after a good meal made with muddy water we retired for the night, and the next day promised lots more spectacular climbing.

The morning dawned cloudy and much cooler, and this provided some welcome relief from the heat and meant our water consumption could be slowed down. I held out hope that we would find some clear pools of water in Crown Creek at lunch time, but nonetheless we carried the muddy water with us, as well as our remaining supplies of clean drinking water, just in case.

We passed the summit cairn and signed the logbook, which dated back to only 2006. We were the first party since October 2017 to sign it. I lamented the fact that in 2000, a club member took away the old logbook that had been there since the late 1970s.

We descended the northern end of the Crown, and some pack passing was needed for the steep bits. And once we were down off the Crown itself, there was quite a bit of walking and navigating on mixed terrain to find the ridge down to Crown Creek. The cloud cover had broken up and it was once again very warm and dry. At last the steep descent to Crown Creek began and from high up we spotted pools of clean water. So we were saved! We had a well earned long and relaxing lunch by the creek, which was shallow and only just flowing, but with abundant water compared to what we had had until now. Despite the fact that the water was crystal clear, it had a fairly hard flavour, as if it were old groundwater, and thus it didn’t quench our thirsts quite as fully as it might have. But water is wet, and better than air for drinking, and we drank and refilled and fattened bladders and filled bottles with as much as we could carry.

Within a few minutes of setting off from our lunch spot we had sweated out most of the water we’d just consumed, as the climb up Point Cameron was relentlessly steep and in the full face of the afternoon sun. The final ascent through the cliffs was breathtakingly steep but nonetheless quite negotiable with all care taken not to dislodge rocks. A devious climbing route underneath a chockstone followed by a steep chute led us to the summit of Point Cameron, the surrounding area burnt and charred by a recent bushfire. We found open flat campspots among the charred tree trunks and after setting up tents we had a couple of hours to relax and rest and watch the sun go down.

The sunset from Point Cameron was truly splendid. Pantoneys Crown stood there in prominence framed in the golden sunlight, and the chains of cliff lines to left, right and in front were lit in gold and orange. Each of us found prominent ledges to sit on and be photographed, and our cameras clicked away. The sun went down and we returned to camp to cook our meals, enjoy cups of tea made from the precious water, and have some conversation around the small campfire.

The subsequent sunrise was, if anything, even more beautiful. To my surprise in this dry weather, the valley was cloaked in a veil of translucent mist, and in the distance low cloud sat snugly in shallow valleys, and spilled like ethereal waterfalls from one valley to the next. We returned to our favourite vantage points and drank in the marvellous scene around and below us.

Our water supplies were low and the day was warming up again so we set off towards McLean Pass and the waiting car further beyond. As with all the walking on this trip, the scenery along the way was splendid, with views of endless cliff lines and expansive valleys. There were several more ups and downs, and our water had almost completely run out when finally we reached a fire trail from where it was only a 2km walk back to the car and the large water container inside it.

After a welcome lunch and long drink by the car, we took to the slow bumpy roads again, with Savannah in the back with the packs, then dropped Emilie at Lithgow and continued our journey back to Sydney.

The words of everyone in the emails that went around once we were all home sums up what the trip meant to everyone, and yes, it was a truly memorable weekend, spectacular and beautiful, challenging and rewarding, with a great group of people. One of the best Blue Mountains bushwalks in years.