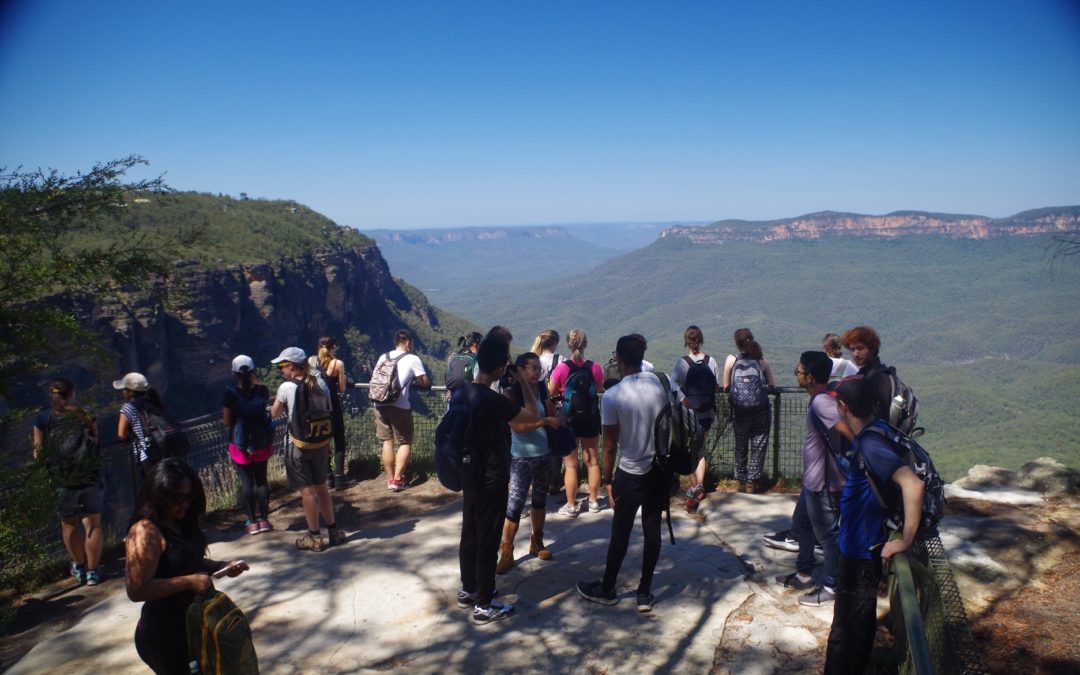 As you can see, bigger than Ben Hur, and the demand was such that I had to put on a second new member walk this coming Sunday, and that’s full!. Obviously a demand for walks if more people want to run some.

A trip this size is not normal, and required several frequent head counts along the way to ensure we didn’t lose anyone.

Most people met up at Central Station with a couple getting on the train along the way and Nikil and Sophia meeting us at Leura.

After the loo stop at Leura Shopping Centre we all set off down to the start of the track at Lone Pine Avenue (see photo), then on to the Lyrebird Dell track which has seen better days and probably hasn’t been upgraded since first made 100 years go. We also went into the sandstone overhang there, also used for shelter in the past for Aboriginal people.

The track then winds its way down the little valley of Gordon’s Creek, crossing it at one point. Soon we came to the Pool of Siloam, which has a waterfall and a pool deep enough for a swim on a hot day (and in fact a small family group there were planning to do that).

After a photostop at the Pool, we started off along the steps which Lead to Gordon Falls Reserve. These steps keep going up and up, and never seem to stop; go round a corner and there’s more! But eventually we reached the top, and then down to Gordon Falls Lookout where there is a magnificent view over the Jamison Valley and Mt Solitary.

We then continued along the Prince Henry Walk with no shortage of great views along the way, until reaching the lookout at Tarpeian Rock. Here we had lunch with a view of the Jamison Valley.

After lunch, we continued along Prince Henry Walk, which had become rougher now, until reaching the junction with that track going past Leura Cascades. A head count was needed here but I had to do it as everyone passed by me as the single file was long enough to block the track for other tourists. So I directed them into the Grotto at Leura Cascades, but the Cascades were a disappointment as the water level was low, and also partly blocked by debris (branches, wood, etc) from past flows.

Thus we didn’t stay long, but continued along the track which shortly took us to the lookout at the top of Bridal Veil Falls. I said that we would soon be at the bottom of the Falls (a long way down), which elicited the question: “how?”. The “how” was via a track which initially went up steeply, and then levelled out to the reach a junction where Federal Pass starts. We then went down a series of steel steps and ladders (with a reminder to one person not to jump down from one step to another as they can be very slippery), to reach the base of Bridal Veil Falls. Here we had a short break and photostop.

From this point I advised everyone that between now and the other side of Leura Forest, we would not stop, as we were entering leech territory. By not stopping we greatly lessened the chance of a leech hopping on board (and in fact no one reported leeches by the end of the walk).

The track continued down until turning right to go through Leura Forest picnic area (and along here somewhere is supposed to be the side-track to Lindeman Pass). Noted some tourists having lunch at Leura Forest but I suspect that also they were also giving some leeches their lunch!

Instead of veering right to go via Dardanelles Pass as I usually do on this track, I stayed on Federal Pass; it by-passes the bottom end of the Giant Stairway which can be clogged with tourists. After a while the Federal Pass meets up again with the western junction of Dardanelles Pass, and from there continues until eventually crossing Katoomba Creek and then the base of Furber Steps.

At the bridge over Katoomba Creek I briefly halted the group and gave some advice about climbing the steep Furber Steps. I wanted to end the walk at the Scenic World car park where we could get a bus back to Katoomba Station. Therefore they were to turn left at the sign at a T junction marked “to Scenic World”. I knew that I would have to be at the tail end of the group going up Furber Steps to keep an eye on those who would be slower going up the Steps.

So off they went, but being engrossed with chatting among themselves those at the head of the group walked right past the rather prominent “Furber Steps” sign (and the steps themselves) and were continuing towards the Scenic railway! I had to ask a couple of the group to run ahead and stop them. So they all came back and then started the quite steep slog up Furber Steps – which are reputedly the third steepest in the Blue Mountains. (Inattention here only caused a slight delay, but best to keep in mind that inattention on bushwalks can have very serious consequences, such as stepping on a snake!).

After the steep climb up Furber Steps, I was with Sheena and Jasmine who were a bit slower coming up, and at one point met a man in his 80’s who had also climbed the steps! (He had actually grown up in Siberia, so they make them tough in Russia!).

When I reached the Scenic World bus stop I saw that we had 17 of the 24 there, and at first assumed that the other seven were in the shops. But no, I was informed that a group of 7 had been seen to turn right at the “to Scenic World” sign, but were too far ahead for someone to run ahead and stop them. I was rather annoyed at this and let out a few choice words. The problem was that we didn’t really know where they were, so we tried to contact them by leaving messages on the mobile phones of some of them. All went unanswered. Trying to retrace our steps to find them was not practical as for all we knew they could be trying to do the same thing, but there was more than one track between Scenic World and Furber Steps. We could end up unknowingly passing each other. The problem resolved itself who I got a call from the group asking where we were, and that they were at the top of Furber’s Track waiting for us. I told them to stay where they are and we would come to them. Fortunately there is a very direct 250 metre track there from Scenic World and we reached them in a few minutes. Another problem was that at Scenic World, the hordes of tourists there were overwhelming the bus service which runs every 15 minutes. This left us with no option but to walk back to Katoomba Station via a 35 minute street bash, uphill too! We made the train with only minutes to spare. Although the next train was 25 minutes later it would have meant missed rain and bus connections for people at the Sydney end, so we were lucky.

Despite the mix-up at the end, it seemed most people were happy with the walk, and for some it was a first visit to the Blue Mountains.
And for others it gave them some experience with bushwalking conditions in Australia.

There was one “no-show”, disappointing as there were many people wanting to come on this walk. I still haven’t received any explanation from that person.

Some good news: with the bushfire season (hopefully) ending on 31st March, we will soon be able to have weekend trips with camp fires!