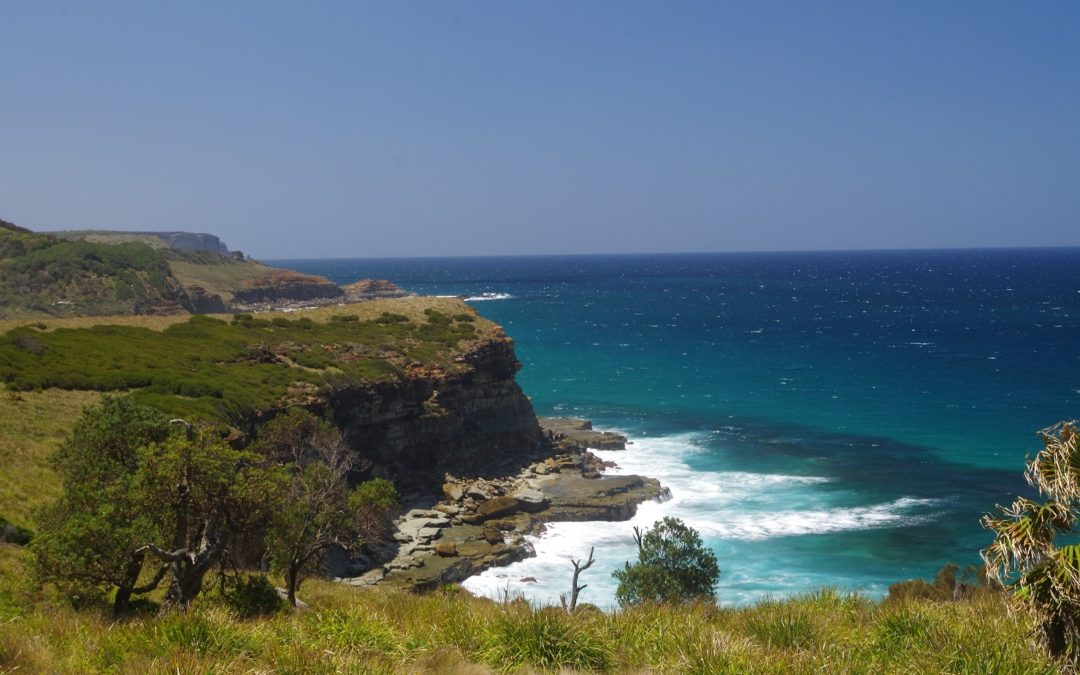 Luck was with us on this walk, with no rain (despite a prediction earlier in the week), and a quite low low tide in the afternoon. We also did the walk a day ahead of heavy sea swells on Sunday which would have made the walk along the rocks to Figure 8 Pool unsafe. Also, two days before the walk, a minor bushfire was reported on the Hacking River Fire Trail, right where we had planned to return to Helensburgh Station. It looked like the walk would have to start and finish at Otford Station, a problem as it only has a train every two hours on weekends. Fortunately the fire was out by the Saturday of the walk and so we we able to stay on the original plan.

Several of us met up at Central Station and travelled down to Helensburgh where we picked up Nathalie and Matthias who had driven to that station. Zhong was also supposed to be there but he missed the train by only a few minutes, despite the train running 20 minutes late due to trackwork. He said he asked his GPS the estimated time to drive from Chatswood to Helensburgh, and it told him 1 hour! Even so he decided to allow 1 hour and 30 minutes for his drive, but it was still not nearly enough.

We continued to Otford Station and from there did the very steep short track to the Otford Pantry (formerly the “Otford Pie Shop”). We had a short break here with some buying smoothies and coffee. I advised Zhong to drive to Otford Lookout (about 500 metres down the road) to meet us there.

A short 500m road bash got us to Otford Lookout and Zhong. From there we went along the Cliff Track, crossing several other groups coming the other way returning from Figure 8 Pool. One of these groups had 27 people in it. (I guess they hadn’t checked the tide charts, as when they would have been there it would have been a very high tide of 1.64 metres, compared to the low tide we were expecting of 0.23 metres at about 4pm).

We branched off about 1.5km along onto the Coast Track, which after passing Werrong Lookout (where we had a photostop) starts dropping down  until it reaches Palm Jungle. Noticed how dry the track was, given the dry summer we have had. Then it breaks out onto the Lomandra and the boardwalk which took us to the south end of Burning Palms Beach. Just before getting to the beach there are views from the boardwalk to Figure 8 Pool (where many people could be seen) and also the Beach itself. Immediately I noticed that despite it being quite a warm sunny day, there was no one in swimming except a few on surfboards, and there were no flags up near the Surf Club. That indicated to me that the Beach was closed and unsafe to swim. That was not surprising due to the forecast of large and strong waves later that afternoon. Matthew said: well lets just see what it’s like when we get there, but I said that if there were no flags up, then swimming was out. Anyway we made our way down on to the sand and found a shady spot there to have lunch.

After lunch we started on the 1km walk along the rocks to Figure 8 Pool. The very low tide made it easier and safer, but even so the predicted heavy and strong swell was just beginning to show itself by waves breaking over the edge of the rock platform (see photos). Eventually we arrived at Figure 8 Pool and there were lots of people there, but not the large crowds seen on other walks here – maybe because it was Saturday. Still, It was the day after Chinese New Year so I would have expected more people.

I think the Figure 8 Pool itself is an anticlimax: it’s not very big. Next to it is a pool I dubbed “Figure Infinity Pool” due to its shape. It was attracting some interest as apparently in it there was a small Wobbegong Shark (these fish usually grow to only 1 metre in length).

I had allowed 2.5 hours to get to Helensburgh Station from Figure 8 Pool, so shortly before 4pm I got the group together for the walk back to the beach along the rocks. We still had the advantage of an outgoing and very low tide which made the walk along the rocks safer. (A combination of a rising tide and a big sea swell will block you at the first point south of Burning Palms Beach; Figure 8 Pool is on the second point south). Then it was along the beach and then up the steep Burgh Track to Garawarra Farm car park. A new stretch of boardwalk makes this easier at one place, but even so the hordes using this track to get to Figure 8 from the car park is causing erosion and making it rough and uneven.

There was a sign here advising that the Coast Track between Wattamolla and Garie Beach was closed. This was no doubt due to the recent big bushfire a couple of weeks ago in the Park there. It is still shown on the NPWS website as being closed.

A brief stop was made so some could use the port-a-loos that are now at the car park (can’t say our walkers were impressed by them!) and then it was along the continuation of the Burgh Track to Hacking River. Immediately it was noticed that this track had a thick covering of leaves and was quite dry. It was obvious that no one had used it for several days. After staying level for a while it drops down the ridge to Lady Wakehurst Drive, which we crossed, and then down to the Hacking River crossing point. The river was ridiculously easy to cross, it was so low. Normally it is almost a metre deep here but this day it was just a little stream (see photo). Then it was up the other bank, where the track seems to disappear for maybe 150 metres before coming to a “to Helensburgh” sign. This track goes up and joins up with the Hacking River Fire Trail.

We did not see any other walkers at all on the Garawarra Farm-Helensburgh track.

Along the fire trail we went, as it rose up fairly steeply but thankfully it is not too long until it levels out. Here we came to the section where the bushfire of the previous 2 days was, and the cause of the fire became immediately obvious. Some drongoes had stolen a car, driven it to this spot and set it alight. The wreck was still there.

The fire trail passes over the present Helensburgh rail tunnel (as evidenced by the overhead power lines) and at the end of the Fire Trail we came to the fence beside the Helensburgh Tip, which we followed. This is a rough and usually slippery track but this day it was quite dry. This leads out to Nixon Place and Halls Road and then to a railway access road which is “paved” with rail ballast which passes behind the houses fronting Gardiner Place. At its closest point to the rail line (from where Helensburgh Station can be seen), a rough side track leads off right; it is used by locals as a short cut to the Station. Just before it reaches Wilson’s Creek Road, there are two big drops which require adjacent tree branches to be used as hand-holds.

That’s were the bush track ends, as on the other side of the street there are concrete steps down to the car park. So here we said goodbye to Nathalie and Matthias, and the rest went to the station. We arrived there eight minutes before the train was due. So we got on the Sydney train, except Zhong who opted to catch a train going south at the same time to Thirroul, and there get an all-stations train back to Otford and his car. This he reckoned saved him 20 minutes.

It was a good day, which some luck being with us (a later than normal start on the Saturday was deliberately chosen to get to Figure 8 Pool at low tide in the late afternoon). All I can say to Zhong is to add one hour to whatever his GPS tells him, as Sydney’s traffic can be so unpredictable.