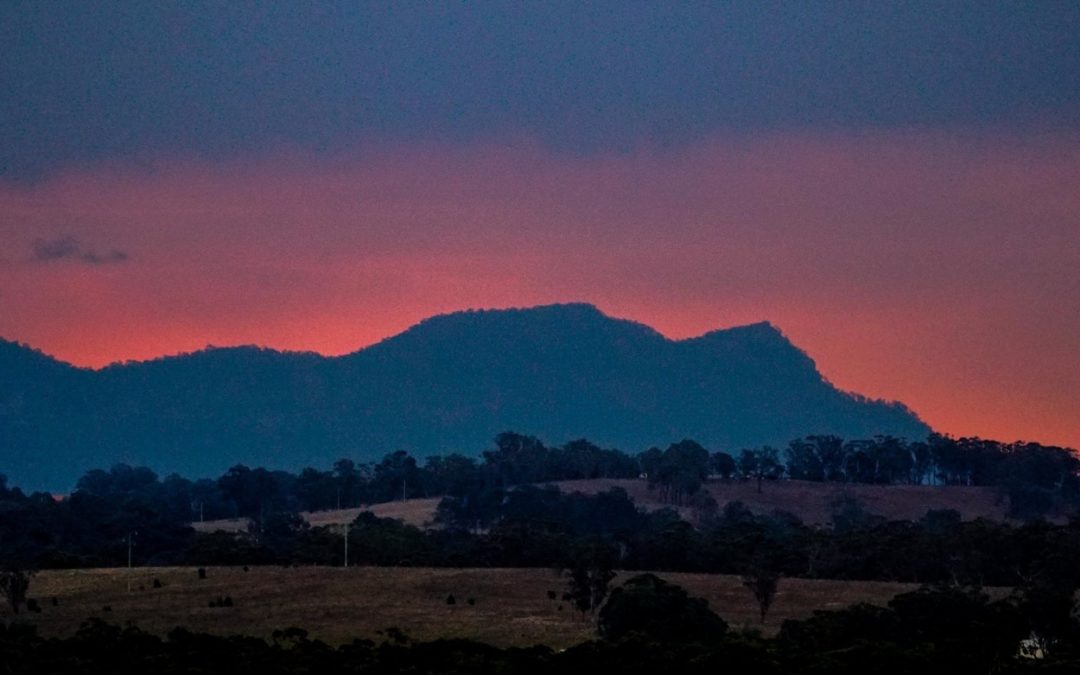 Despite promising cool temperatures up in the mountains, in the end our party was made up of just the two of us. With plenty of time and no major hurry, it was a relaxed start, leaving Maitland late morning, with Emilie driving up from Sydney and then me throwing together some last minute items. We stopped at Dungog for some lunch, and then headed to Lagoon Pinch. After scenic drive, we arrived at the Carpark at about 2pm. Setting off up the first, steepest part of the track, I soon realised I didn’t have my mobile phone, so it was a packless jog back down, and fruitless search of the car before running back up to continue. (said phone was later found still at home…)

Despite the temperature forecast for mid 20s, the walk up the Corker was still a good workout due to the high humidity, at least in the lower part. Getting higher up, we kept an eye out  for the Governor’s Lookout as noted on the topo map and mentioned by Bruce Stafford on his recent trip up here, but it we weren’t able see any signs of a lookout. So onwards we continued until we reached the junction with the Gloucester Tops trail and made the short detour down to Wombat Creek to fill up with water. After chatting to a couple we met there, we continued on to Careys Peak. On the way there were ominous clouds and more than a few rumbles of thunder, and when we got to Careys Peak the view was of clouds and mist rising from the valleys and sitting over the mountains. Whilst we couldn’t see as far as on a clear day, I thought the effect of the clouds and the mist easily compensated.

After some photos, we headed on, planning to get to Junction Pools and camp there. The track taken meant heading back towards Wombat Creek, then turning and taking the Aeroplane Hill track (named after one of the many plane crashes in the Tops) The track takes a route around Black Swamp where there is a nice place to camp, and then past the track (now gated shut) leading to the quarantined area affected by the phytophthora mould. On this part of the track it began to rain, but thankfully wasn’t too heavy and had stopped by the time we reached Junction Pools at around 8:30 or so. Due to Junction Pools being accessible by 4WD vehicles, and a long weekend, it was quite busy and it was quickly decided to continue past and find a campsite further up the track. Continuing along Junction Pools trail, we turned off onto Edwards Swamp Track and found a nice grassy campsite not too far up the trail. So by the time we set up camp and had something to eat, it was about 10pm so we both soon retired to our tents.

The next morning a group of trail bikes rode past on the Junction Pools trail but other than that it was nice and quiet. So we packed up camp and headed back to Junction Pools to have breakfast by the creek, and for Emilie to get some atmospheric camera shots of the surrounds in the early light with her impressive camera. I consoled myself with the knowledge that at least my camera is waterproof if dropped…

Soon we were heading back up the trail, and turning into Edwards Swamp Track again, continuing past our campsite and on to the junction with Edwards Swamp Trail. The terrain is quite open here and walking is upon old vehicle trails, which skirt around the swampy marshland and cross small creeks here and there. We decided to head up to the junction with the Barrington Trail and see what the walking was like, but finding it to be another vehicle trail, with no real sights to see, the thought of walking the long way back to Carey’s Peak on a such a trail was unappealing, so we headed back the way we had come, but continued along Edwards Swamp Trail rather than back to Junction Pools. The walking was quite easy, and at least the outlook was nice, past Edwards, then Saxby Swamp as we headed back to the junction which took us back to Careys Peak. This time it was much clearer than the day before, however instead of clouds the haziness limited our view in the distance. By now it was about 1:30, and having seen enough vehicle trails for the moment, it was decided to amend the trip and head back down the Corker, seeing how things went along the way. Once again we made a search for the Governor’s lookout; Emilie found the point on her GPS and we trekked up to what was a bit of a promontory above the track, however the tree growth in the view left us unsure if we had found the place or not. Continuing down the Corker we made good time and were back at the car just before 4pm. According to the GPS we had walked 38km in total.

It was then decided to take a short detour on the way back to a swimming hole mentioned by a couple we had talked to up at Careys Peak; Ladies Well on the Allyn River. It was surrounded by hordes of campers but made a refreshing stop. There were a couple of spots to jump into one of the pools below- depending on your level of courage, roughly 5 or 8 metres.  So after cooling down for a while we began to head back home, stopping at the (world’s?) largest thong and shoe collection; me planning on continuing to My Royal for a walk the next day, with Emilie deciding to head back to Sydney.

So after farewelling Emilie, and a quick change of maps, I headed on to Singleton and then out to Mount Royal National Park. I knew I would need to be careful of kangaroos and wallabies at that time of night, and went past five, unfortunately managing to collect one with the front of the car after it jumped out at the last minute. I’ll blame its dark colour, but at least it managed to hop off and up a steep gully, so hopefully it was ok, after what was thankfully a lower speed collision travelling up a hill. Finally reaching the Youngeville campground at around 10pm, I quickly set up the tent and went to sleep for the first of many times that night, at one instance waking to a loud thud of presumably a (large) branch falling from a tree.

The next morning I had a relatively relaxed start and ambled off at 9:30 from the carpark at the base of Mount Royal. Having walked here a couple of times before I knew the steepness of the ascent, but still found it a good workout with it being quite warm and sunny. My plan was to walk to the summit, as I have done before, then continue past and see how far I could continue, having read of the possibility of climbing south-north over the mountain (or vice-versa).

A snake skin amongst the tufts of grass was slightly unnerving, but thankfully there was no sign of its owner during the walk. Up over a few rocky sections and the grass soon gives way to a knife edge rocky ridge which is the way up to another grassy meadow, then an abrupt wall of overhanging trees where a hole in the trees leads to moss-covered rocks and hanging moss as if one has entered another world.  After a while there is yet another break into a grassy spot and then back into an open forest of (I believe) Antarctic Beech. Onwards through this, leads to the old trig station with logbook. Filling in, I found that no one had yet been to the summit (or filled out the book) this year.

After a rest and something to eat, I continued further north until I found the small group of large grass trees I had heard about. Just past these the mountain drops into a saddle with another smaller peak to the north, however at this point the terrain is rocky with and has numerous small saplings and vines, and I found it difficult to maintain progress towards the lower peak once obscured by trees. So with the time getting on and needing to be back by mid-afternoon, I decided to head back the way I had come, leaving further exploration for another day.

One of the grassy meadows was nice place for a bite to eat, and I had the privilege of watching a large eagle glide past over the valley to the East. Then it was onwards back down the mountain. Walking down is a bit easier, and also gives an amazing view most of the way down.  By this time the wind was blowing and rainclouds could be seen to the west over the adjacent mountains.

Back at the car however the thermometer was reading 30 degrees, and when nearly back to Singleton had reached 38, making me glad to have been in the mountains with the cooler temperatures there.

All up it was well worth exploring. The weather was perfect with even the rain holding off (almost).

Mount Royal is definitely on the list for another attempt in the future.