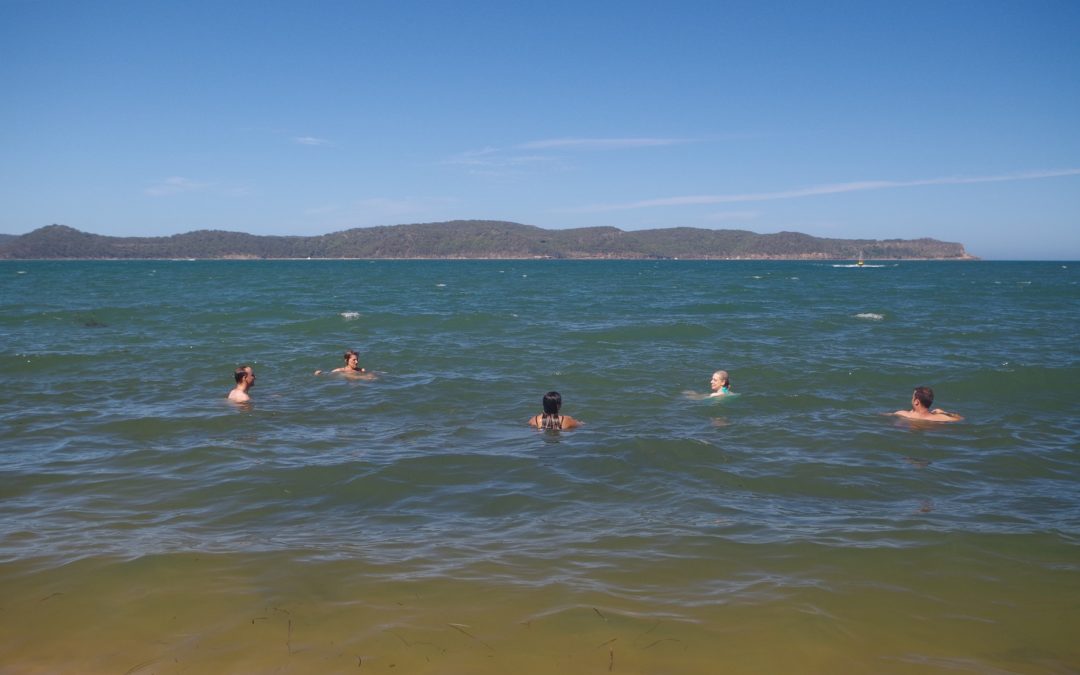 Planning this walk meant keeping a close eye on the local weather forecasts for several days beforehand, hoping that the originally forecast temperature of 29 degrees C would not rise. In fact it dropped to 27 degrees. Even better, the preceding days were marked with a cool sea breeze coming in locally after 2pm, so things looked promising. Also I had considered an alternate walk at Stanwell Park, but I thought it might be too hot there. As it turned out it was a wise decision in light of the bushfire in the Royal National Park on the weekend which closed the area.

9 people arrived by train at Woy Woy and no fewer than 5 in cars (including mine)! Because of that we didn’t need to get the bus, and it also made it possible to do a car shuffle between Umina and Pearl Beach, which gave us more flexibility in the afternoon on the way back.

So we all set off to the south end of Umina Beach, and after leaving the non-drivers waiting there in the shade, the cars set off for the short 10 minute run to Pearl Beach. All cars except mine were left there, and the drivers returned to Umina where I left my car. Then we all set off on the walk.

We first negotiated the rocks at the southern end of the beach, and then the rock platform there. As it was high tide, I led the group up the middle of the three paths up the beach (the easiest of the three not being accessible due to the high tide). All made it up OK and then we set out along the path below the cliffs of Mt Ettalong.

Along the way I noted what appeared to be a relatively new minor landslide of shale-type rock that I didn’t recall being on the track on the last walk there last August. We also spotted an Eagle circling high up. Then on to Pearl Beach, where I advised that here was the last loo stop before Patonga! From there it was a short road bash to Crommelin Aboretum, where we had a morning tea break. (All the trees in the Arboretum are locally native, including the palms).

I decided not to use the old bush track from the Arboretum to the Pearl Beach-Patonga Fire trail, as I thought there might be a higher than usual risk of snakes (it is a fairly overgrown track). Instead we went to the start of the fire trail where it meets the road near the Arboretum. Safer but less exciting. Along this track we had some comfort from the sea breeze. A side trip to Warrah Lookout gave us excellent views over the Hawkesbury River and Palm Beach. Some high Cirrus clouds were noted; these usually predict rain in 2-3 days’ time (which indeed did occur, but very light rain).

At this point we join the Great North Walk for the final trek to Patonga. At first it is level through scrub, but soon drops down through open forest. We lost the sea breeze for a while but regained it on reaching Patonga. On the way down the track, Fadi put his hand on a tree trunk and felt a sharp sting. This required some First Aid, with a cold compress I had (remarkably still quite cold despite being put in my pack 4 hours earlier on a hot day), and an anti-histamine cream from Nathalie. Both worked well – the pain and swelling subsided in a few minutes and did not return. What he had touched we don’t know, but likely a Bull Ant.

So we arrived at Patonga, and some people opted to buy a fish and chip lunch there. The cafe seating was all taken (by then it was 1pm) so we settled on sitting in the shade under a large shady tree for lunch.

As I mentioned earlier, having the cars at Pearl Beach meant that we had more freedom with the time and were not tied to a timetable. So, we could take an advantage of an extended lunch break at Patonga until the stronger afternoon sea breeze was expected to kick in about 2.30pm, which it did. That meant we didn’t have to walk in the hottest part of the day. I asked if anyone knew the song “Mad dogs and Englishmen go out in the midday sun”, and Ansuya did, apparently it’s still well known in her native South Africa.

Now, in case anyone thinks I am picking on the English, that song was written by a famous Englishman, Noël Coward, in 1931 while driving from Hanoi to Saigon in Vietnam. It includes this stanza:

And we decided to shun the noonday sun as well.

After our long lunch, we set off again back to Pearl Beach, first by the stiff climb up the Great North Walk, this time aided by a fresh sea breeze which kept us cool. After another brief stop at Warrah Lookout for a water break, we continued down the fire trail to Pearl Beach. Here, many of us took advantage of the beach for a swim, or to paddle our feet (sinking in the sand a bit – a reminder that there are sometimes quicksands at Pearl Beach). The water was pleasantly warm and the swimmers enjoyed the cool-down.

From there, we walked a block from the Beach to the cars, where we set off back home. Those in my car, ans well as Fadi’s and  Zhong’s, stopped by at Woy Woy Maccas for a coffee, and we were visited by a wild duck trying to get in the door of Maccas!

This was a nice walk on a very warm day which was made comfortable by a constant sea breeze (most of the way), and also lucky with the weather. The very next day was a total fire ban day, so if the walk had been scheduled for then (or if the weather had been hotter), the walk would have had to be cancelled.

Future walks I am planning include Manly-Balmoral, Figure 8 Pool – Burning Palms (both dates subject to a suitable low tide), and on April 22 the Red Baron Walk, Cowan to Brooklyn. (Why the “Red Baron Walk”? you will have to come along to find out!). These walks will be posted to the SUBW website in Uni O-week.