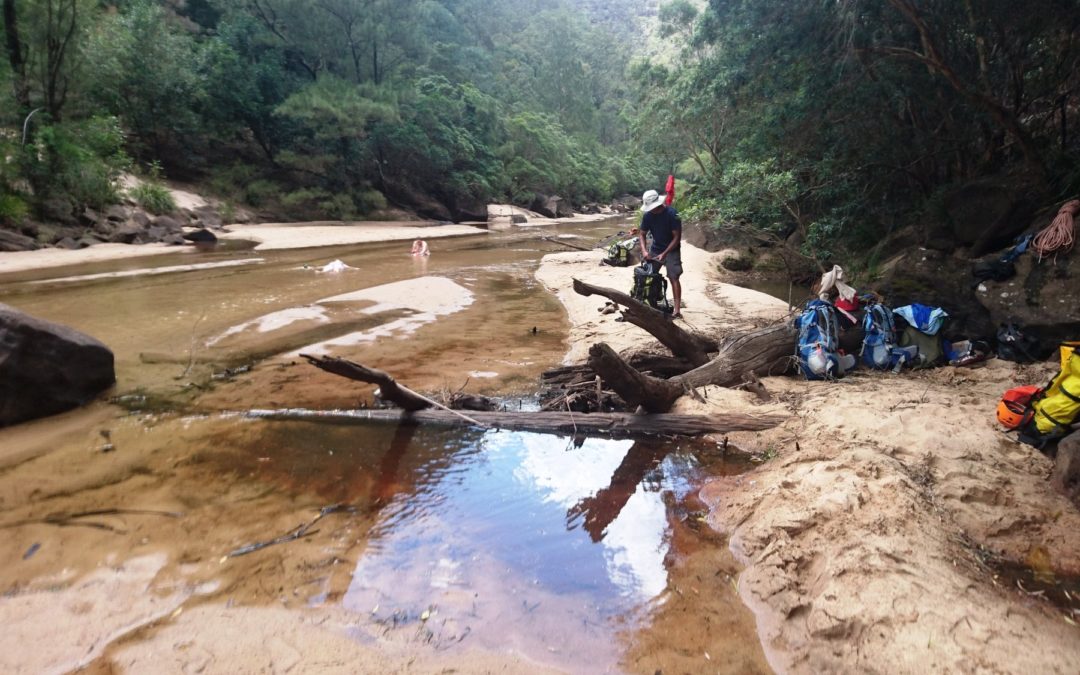 This trip came about when we read a report from our mates the Fat Canyoners who had suffered a rare navigational mishap and managed to completely miss their target canyon. Judging by their photos, it must have been pretty traumatic for them as they remained fully clothed the whole trip. We were determined to do better. The canyon in question is quite close to a great camp cave that Paul had visited previously and so we had a plan: find the canyon and find the cave.

We met on a meltingly hot Friday afternoon in Windsor. The weather forecast suggesting Saturday would be even hotter – maybe 40 deg.  The only sensible course of action was to hit the Macquarie Arms Hotel (one of a small list claiming to be Australia’s oldest Pub) for a few cold beers.

When the trip was first mentioned we had about 13 people wanting to come which was way too many.  A few drop outs in the last few days and hours bought our numbers back to 8 which was a comfortable maximum given all the abseils expected.

A nice dinner in the beer garden was followed by a brief presentation ceremony where a few deserving recipients were presented with their Canyoning Badge for valiant effort in some tough canyons in recent months.

Then it was time to head off up the Putty Road to our remote campsite.  The last part of the trip involved removing a couple of fallen trees on the Culoul Fire trail. We were lucky to have Rick and Robyn along as they always come prepared with saws and axes. We were also lucky to have Paul’s sturdy four wheel drive and a big towing strap to pull an enormously heavy tree off the track. This made a welcome change for Paul from towing recalcitrant Kombi Vans.

We finally made camp around 10 pm and had a birthday cake for Fran and some port in special glasses before heading for bed. It was a very hot night with a spectacular lightning display in the distance.

We woke early and were keen to be away before the forecast heatwave. A quick and easy walk down the fire trail was followed by an  unpleasant scrub bash through some terrible lawyer vine. Nearly everyone was thoroughly scratched up by the time we found the creek junction which marked the start of our canyon.

The canyon formed up quickly though there were none of the usual close constrictions nor high walls we usually find. Instead we encountered a series of high abseils some with tricky sections and lots of loose rocks. In all about seven abseils.

We were all carrying heavy overnight packs and this seemed to make a big difference on the abseils. More friction was needed. Those using rack descenders were able to adjust their friction and compensate better for the additional weight. Those of us with hydrobots struggled a little, dropping too fast on some of the pitches.

Adrian took the opportunity to try out a quick stick set up on one pitch and was well pleased with it. The quick stick reduces the number of full sized ropes needed  and will be a great help on multi day walks where 60 m drops are expected.

There had been a lot of discussion about the final abseil – which one source estimated at 80 m. This would have presented a big challenge and created some concerns. This last pitch weighed on everyone’s mind as we advanced down the canyon. We were very pleased to reach it and find it was a fraction under 60 m which meant a simple double rope set up would suffice. Far below we could see the ropes reaching the sandy bank of the Colo River. This proved to be an awesome abseil from a great height into a spectacular oasis.

It took over an hour and a half to get everyone down the last abseil and we were glad that our numbers weren’t greater and that the day was warm. In honour of the Fat Canyoners who had inspired the trip, one participant  completed the last drop in a less than clothed state and is now suffering rope burns in some odd places given the lack of friction on his descender.

We had a relaxing soak in the river with everyone doing hippopotamus/bathing beauty impersonations in the warm shallow water, followed by lunch in a truly spectacular location.

Eventually we got motivated and set off up the Colo River to find a camp cave that Paul had visited previously. Just before the cave Fran and Marty simultaneously found a patch of the quick sand for which the Colo is notorious. One minute we were trudging along the river bank, next minute we were more than waist deep, sinking fast, trying to extract ourselves and retain our dignity and shoes. I’m sure our wonderful companions would have liked to help, if only they had been able to stop laughing and taking photos. This stuff looks like normal sand with no sign of any danger, makes for an interesting walk.

After a look at the Colo cave we decided to head up the nearby Wollemi Creek to look for an even better camp cave and some deeper pools for a swim. It was a hard slog up Wollemi Creek which has lots of boulders. The afternoon was quite hot and humid and we were delighted to reach the camp cave and find a cool, deep, clothing optional pool nearby. We spent the next hour or so floating around and cooling off.

The camp cave was perfect with lots of flat sandy floor space, a protected snug, sandstone shelves pre- stocked with firewood and kindling and great water views. We spent a relaxing evening eating, swapping stories, planning future trips, solving the problems of the world and drinking all the wine Adrian and Ankit had carried in before settling in for a good night’s sleep under a clear dark, starry night.

We woke early to a cool morning and decided to tackle the steep walk out before the day got too hot. By 8 am we were on Bob Buck’s Pass Number 1 which is a steep but straight forward ridge climb. We were very glad when Paul revised his original estimate of the climb from a 280m ascent down to “only“ 200m. We had way less food and alcohol in our packs which made things easier. After stopping at a spectacular flat rock look out for morning tea, we were back at the cars before 11:30am Just time for a 5 minute side walk to Holllow Rock for some photos and we were off.

And so it was back to the Macquarie Arms Hotel for a well earned beer and lunch. It was here that we faced our first serious challenge of the weekend (if you don’t count someone hooking herself and her back pack up in a small tree half way down a 30 m abseil). Our usual safety target involves not losing more than 10% of our participants to misadventure on any given trip. Imagine our dismay when one of our number (fully 12.5% of the cohort) completely disappeared on arrival at the Pub and could not be found despite a thorough search of the bar, bistro, gaming room, dining room, Pub TAB and beer garden – which was overrun with bikies. Worse still, he wasn’t answering his phone and his beer was going flat. We left a phone message with his very understanding partner and were preparing to activate “Emergency Response Procedure Number 1 – Lost Committee Member” when he mysteriously re appeared – beer in hand. Imagine our relief at not having to fill out all that paperwork and explain this to the Club Committee.

A nice lunch followed although we think the Fat Canyoners 4-star rating for the food is a bit generous – the consensus was more like 3 stars. And so it was time to go our separate ways.

All in all an excellent trip. Great company, Nice canyon, fun abseils, spectacular scenery, a 5-star camping cave and pool and 0% participant losses.

Note for future trip leaders: This location would make a terrific non-canyoning intermediate overnight walk.  It has easy navigation, a great cave, permanent water, spectacular views, a nice swimming hole and a decent walk in and out. There is no lawyer vine on the track or the pass and participants should come out mostly unscratched and completely blissed out. Highly recommended.