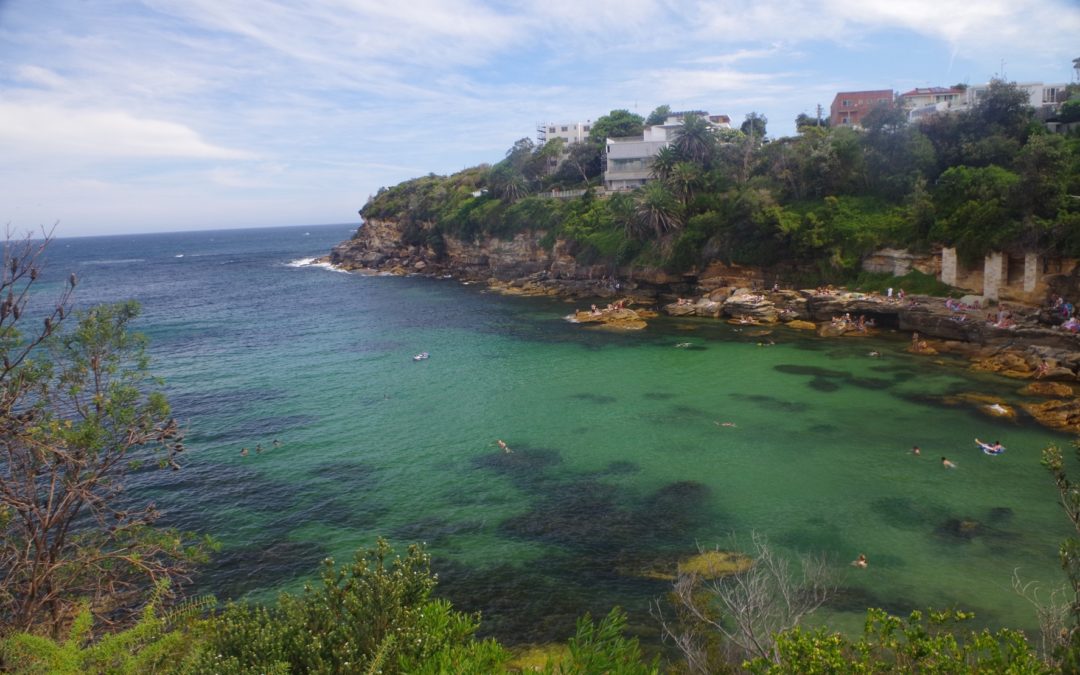 It is curious that on so many bushwalks into distant national parks we see few or no animals or birds, yet here we are on a walk in Sydney’s Eastern Suburbs and we saw a few unusual birds. Read on.

All the others except myself started the walk at Bondi. I had to join them at Bronte because of an unexpected occurrence at home just as I was leaving for the train. The first hint was a chorus of warning calls from the resident Noisy Miners (Manorina melanocephala), and then from the chooks (Gallus gallus domesticus). A Goanna was trying to find a way into the chookyard to steal eggs, but the resident Bush Turkey (Alectura lathami) was on to it, biting the Goanna on the tail. When the Goanna attempted to get away from the turkey by running over his nest, that really enraged the turkey who intensified his attack. He was then joined by a second turkey (female) and between them they managed to tree the Goanna. My presence also gave the Goanna an incentive to climb up high (Goannas fear humans as they were – and still are – on the menu for Indigenous people). Up the tree however, the Goanna was mobbed by Magpies, the Noisy Miners, and a Butcher Bird. It was still up there an hour later when I left to get the next train.

Anyway, I thus arranged to meet up with the others at Bronte Beach, and got there just a few minutes before they did, having walked from Bondi. From there, after topping up water bottles, we continued along the Coastal Walk, which for the first 200 metres means walking beside parked cars in the old tramline cutting just south of the beach. (A link to a photo of this cutting with a tram is here: https://tdu.to/i/26401). The sides of the cutting still look the same today (see my photos), although the tracks have long gone, removed by the dimwits, drongos and dunces of the NSW Cahill Labor Government who dismantled Sydney’s massive tram system. The Bronte (and Bondi) line was closed in 1960.

Next stop was Waverley Cemetery, although the walkway is temporarily closed due to repairs from storm damage in 2015 (it’s taking a while!). In the cemetery we saw what is likely a Nankeen Kestrel, a small raptor or bird of prey. It had something in its talons, possibly a lizard.

Then we followed the coastal track round Gordon’s Bay, which had people floating on Li-los – and lots of people walking dogs. From there it was on to Coogee Beach, which at the time was packed on this very warm day. Coogee was break time, and we went to one of Athen’s favourite shops to buy pies, bananas, drinks etc etc. Then down to the beach to eat our food, than after an ice ceam we continued along to South Coogee via the Coastal walk. A street bash is required at one point, but it led to the finding of another unusual bird, this time a young cuckoo in a footpath schrub. The bird was likely a young Eastern (or Common) Koel (Eudynamys orientalis). This cuckoo is common in Sydney in the summer, with its high-pitched rising call.

Then we left the street bash and went through a small alleyway between houses to reach Lurline Bay. There had been a high tide only 30 minutes earlier but it was still safe to proceed along the rocks as there was only a gentle sea swell. Along the way we looked at the intricate pattern on some of the sandstone cliff faces, almost as delicate at lace (see photos).

After Lurline Bay next stop was Maroubra Beach, which by that time was starting to empty out. A few Blue Bottles, or “Portuguese Man-of-War, (Physalia physalis), were noticed at the waters edge. The tentacles are a colony of stinging polyps, and if you see lots of them at the waters edge at a beach, don’t go in the water as you might be stung. The sting can be quite painful to someone with delicate thin skin such as a child or teenager. (Incidentally, there is still a myth about that to ease the pain you rub sand onto the affected skin. Definitely DO NOT do this as it makes the pain much worse. Instead the best treatment is first to pick off the tentacles – preferably with something wrapped round your fingertips. Then  pour very warm water over it. Leaving sea water in a small plastic water bottle covered in black in the sun for some minutes would probably get you some warm water quickly).

South of Maroubra Beach is the start of the track through Malabar Headland National Park. This is the only true bush track on the whole walk (apart from the short section above the tramline cutting at Bronte). Some of it has been paved with the lattice board-walk as found on the way to Burning Palms in the Royal NP, but mostly it is just a dirt track. It passes through heath-land and has lots of wattle birds in the scrub. The track is close to 3km long as it follows the cliff line in a large loop. Athena commented on the several people running or walking on this track, as she said often she has seen no-one else on the track here.

At this time it was right on sunset (just after 8pm) as we approached Malabar Beach, so the timing was good as we only had another 30 minutes of twilight until it got totally dark. That started a discussion about comparing the short period of twilight we have here (30-40 minutes) versus its long length in Northern Europe. “Girl of Finland” said that in Finland it doesn’t actually get totally dark at night in summer. Athena had earlier called for a taxi to meet us at the parking area near the north end of the beach, and it arrived only a few minutes after we got there. Being a large taxi we all fitted in and Monica and I were dropped off at Maroubra Junction to continue by bus to Railway Square or Newtown, and the others went off to Bondi.

This was a good walk, taking a leisurely 6 hours (with extended food stop at Coogee), in a part of Sydney not often visited. The weather was good too; not too hot. One of us, guest “Girl of Finland” (a friend of Karen’s) had only arrived in Sydney 30 hours earlier! Sorry I don’t know her proper name (can you help me there, Karen?).

BTW the first 3 photos of King Parrots were not taken on this walk, but the day before at home. They are just there for interest.