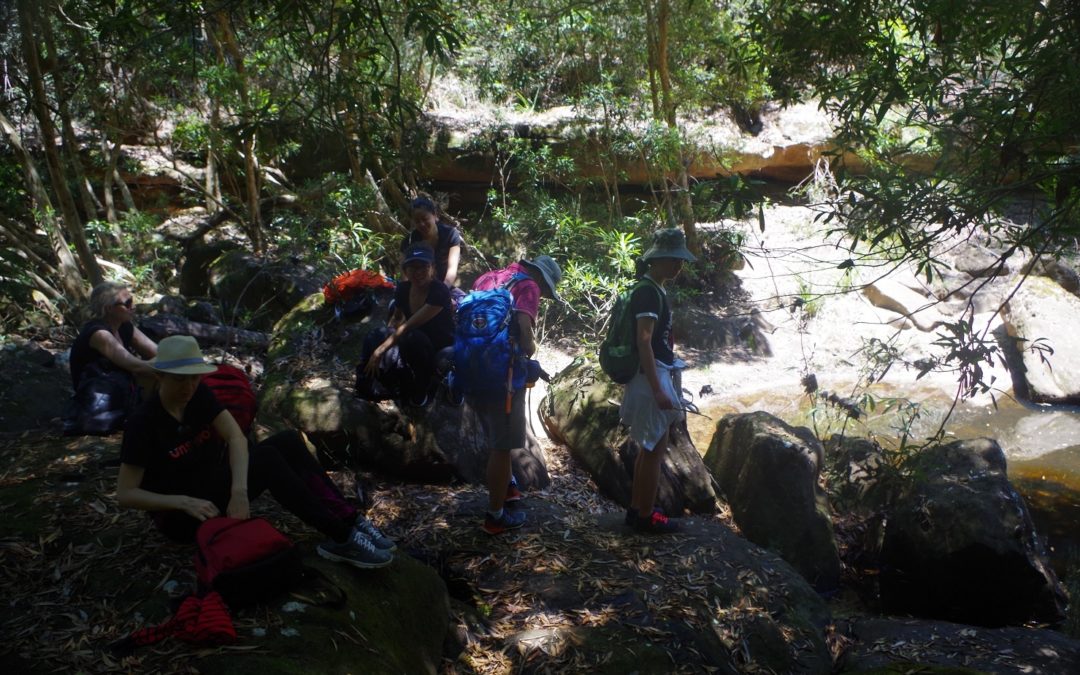 Although 8 people signed up, only 5 people got off the train at Springwood Station (Zhong had driven up and was waiting for us there). Within a few minutes I got a call from person number 7, Kundi, to say she hadn’t got off the train at Springwood, and the next stop was Hazelbrook. Zhong then volunteered to drive up to Hazelbrook to collect her, as the next return train from Hazelbrook to Springwood wasn’t for another hour. So in the meantime we settled in for a wait at a nice coffee shop opposite the Station. But the 8th person was Stuart Lawrence, who didn’t appear at the station at all, so it was a matter of maybe see you next time maybe. Zhong returned with Kundi about an hour later, but Cathie said that the time spent at the coffee shop meant that everyone was able to connect with each other earlier, so not entirely wasted. (It turned out that Kundi was not aware that the doors on the V Set cars used on Blue Mountains trains do not automatically open at train platforms, but need to be opened by hand once the guard releases the door lock. Kundi couldn’t work out why the door didn’t automatically open at Springwood until it was too late). So we set off an hour later than planned and reached the start of the walk at  the end of Sassafras Gully Road. I ignored “Wildwalks” advice to get there via Homedale Street, as going further along to Short Street and the Valley Road instead is not only shorter, but avoids an unnecessary short descent then a short climb out. Sassafras Gully Track starts to descend fairly steeply for some distance, crossing Sassafras Creek a few times until reaching a Campsite where the track to Faulconbridge branches off. We were serenaded all the way by the loud drumming of hundreds of Cicadas, which intrigued our overseas students. Before we got there however, the girls ahead of me came to an abrupt stop, as a pair of female walkers ahead had stopped for a short “comfort stop”, not expecting our group to come upon them. Of course, this stop provided any leeches around with a chance to hop on us, and indeed one was spotted but it was removed before it had a chance to attach itself. After a short break at that campsite, we continued on and the track became a bit more vague but still able to be followed without too much trouble. It follows Glenbrook Creek along this section. Eventually we reached the junction of Glenbrook and Magdala Creeks, and the track seemed to disappear briefly, but I decided to stop here for lunch as there were nice big rock to sit on (leech-proof) and shade.

At lunch I asked Zhong to see if his GPS had accurately tracked our course and way-points, and it had. Maria though got a bit worried that we might be lost if I was asking Zhong to check the GPS. (Incidentally it doesn’t recognise “Maccas” as a destination, which is why Zhong couldn’t find Woy Woy Maccas on my recent Kilcare walk).

After lunch the track was easily found again and we continued on, very shortly reaching a junction were one track returns to Springwood (Fairy Dell Track), and another to Martin’s Lookout which is not really part of a loop (it could be an add-on on a day on which you have an extra 2 hours allocated for the walk). The junction is called “Perch Ponds” (see photo). Fairly Dell Track rises steeply for a short section before becoming more easily graded for the rest of the distance to its exit at Springwood Avenue 4 km further on. Maria looked at the initial steep gradient and We passed Martin’s Falls which only had a trickle of water so not worth a look, and continued following Magada Creek upward crossing it a few times. A couple of times the continuation of the track on the other bank was not always obvious. At one place there are actually arrows etched into the rock!

Eventually we came to the track junction where Fairy Dell Track goes left and the track straight ahead becomes Batman Track. I get the impression that NPWS doesn’t want people on Batman Track as the “Fairy Dell Track” sign is right across it! Also at this point there is a tree which is over 3/4 burned through at the base and it can only be a matter of time before it falls, like the large mossy log straddling the creek nearby. We also saw our only wild creature, a Skink, here (apart from some kangaroos at Werrington on the way home). We came out at Springwood Avenue and from there it was only about 200 metres to Springwood Station. Maria left us to go to Leura on the train, as did Zhong to drive back home.

The weather was not too bad although the forecast was for 28 degrees C at Springwood.If it had become too warm I was prepared to do a shorter walk to faulconbridge Station, but it turned out that all of the first part of the walk was in shade and followed watercourses, so was relatively cool. The temperature didn’t get hot until we were back at Springwood about 2.45pm.

We got the train at Springwood and returned back to Sydney.

It was a good walk which is better in early Summer than Winter as it is shaded most of the way. Swimming might be possible but I wouldn’t trust the quality of the water as it includes street run-off from the Springwood and Faulconbridge townships. And Kundi now knows that you have to open the doors of V Sets yourself at the station.