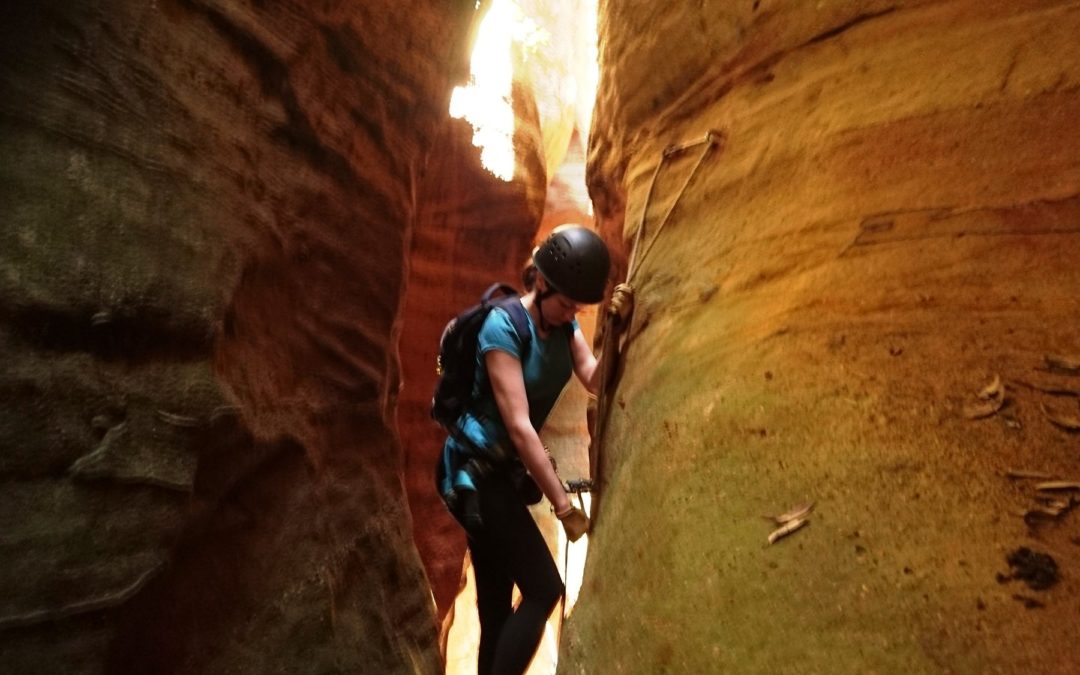 This trip was organised as a follow up to a trip in June when Paul and I and our recently exported mate Clint had a cold and rushed trip through one canyon and failed to make it up the pass to reach the second canyon. We clearly had unfinished business in Coorongooba and the nice weekend weather forecast and a great crew of experienced canyoners gave us a good chance to return and put things in order.

A few of us drove up on Friday evening, stopping for a beer and a decent feed at our favourite pub in Katoomba. It was cold and windy as we left and things looked ominous to the north where we were headed. By the time we got to the Coorongooba Campround at Glen Davis, rain was falling and the wind had picked up. We had to dodge various wombats and kangaroos as we drove in. We quickly pitched our tents and had a go at erecting Paul’s new tarp shelter which resembled a yacht spinnaker caught in the wind and put up a real fight. Tarp in place we boiled the billy and then crashed for the night.

Coorongooba is a fantastic location, perfect for campers, walkers and canyoners with a nice river, grassy flats, a few basic amenities and lots of wildlife. See appendix A. Definitely worth a weekend trip if you get a chance.

Something woke the resident kookaburras at least an hour before dawn on Saturday morning and they set about waking every bird in the campground. No further sleep was possible. There are birds everywhere and this was good news for our two resident twitchers who spent a lot of time on the weekend pouring over bird books, phone apps and binoculars observing our noisy feathered friends. See Appendix B

Ankit, Bec, Andrew and Eve arrived early and we set off about 9 am in cool and overcast conditions to tackle our first canyon.

Our first task was to scale a steep ridge and follow the cliff line and Geoff took the lead navigating us up through some challenging bush. We were headed for a beautiful overhang cave which took about 90 minutes. This would make an ideal camp cave with towering sandstone cliffs, a flat sandy floor, and tall trees. The various branches of a creek join nearby meaning it has permanent water. A perfect campsite for the future. This place alone made the walk in worthwhile.

Not far from the cave, we followed a tip from our friends the Fat Canyoners and headed up a steep defile – which led us onto a high ridge above the creek system. We saw two different species of Black Cockatoos in the space of 10 minutes as we walked up.

We had two attempts to scramble down the side of the ridge into our targeted creek. The sun had come out and made for very hot going. We found a few small passes through the cliff lines and were soon eating lunch in the shady creek bed

Then followed a nice abseil into a small pool and we were away down the creek. For the next three hours we scrambled, waded, climbed down and occasionally abseiled through a very long and increasingly spectacular canyon. The further we went, the better it got. We saw lots of native yabbies in the pools which is always a good sign. One of our party was forced to upgrade his initial rating of the canyon from 8/10 to 9/10 as we got into some sustained constrictions with very high walls further down.

Sadly we found a dead juvenile Koala in the canyon. It must have fallen in and been unable to escape.

The water was much warmer than our initial trip in June and hence we were less rushed. Everyone was glad of our insistence on full steamer wetsuits after such a long time in the canyon. Much to Paul’s disappointment, I managed not to fall in the prominent pothole this time. There was however, still time to recall and laugh (again) at my unplanned swim in June.

The canyon was not particularly steep and was quite easy to negotiate. It would make an ideal beginner canyon. Eve took dozens of photos and everyone seemed impressed by what they saw.

We finally staggered out of the canyon and back to the overhang cave about 6pm. After changing out of our wet clothes and a quick snack we headed off back down the mountain to the campground, arriving just after sunset.

We said farewell to Andrew and Eve and had a few cold beverages whilst preparing a late dinner. The dinner guests included a family of marauding brush tail possums who came very close in search of Bec’s chocolate but ended up fighting over bits of carrot.

Sadly, the possums were better behaved than some of our human fellow campers who drove around the site quite dangerously putting campers and wildlife at risk.

It had been a big day and we crashed early.

The next morning started with yet another noisy pre dawn chorus from the kookaburras and friends and after a quick breakfast we were on the track by 8:30.

Our first challenge was to scale a few hundred metres of improbably steep mountain side up to the base of the towering cliff line. This is spectacular and difficult terrain. In places we had to contend with exposed climbs as we forced our way upwards. Geoff once again did a great job finding the path which occasionally disappeared. Ropes were used to haul packs and provide security in a few places. Paul set up an excellent top belay above one climb and this made things much easier and safer for all. We eventually reached the base of the cliffs and made our way around and down into the canyon. Fortunately we had climbed up in cool and overcast conditions which made things more bearable.

Our first abseil was a very nice and dry cliff and we found ourselves in a small, unremarkable canyon where we stopped for a well earned morning tea after the huge climb.

A few minutes along we found another nice abseil into a small pool. Despite Ankit’s best attempts to drag us clear, everyone landed in the pool and got wet feet. We were delighted to look back and see the large heart shaped chock stone we had abseiled over. This is a well known feature of the canyon and proved we were in the right spot.

Things started to get a bit more serious as we progressed. The next two abseils were much more challenging and led us deep into a dark constriction. The second of these abseils took a lot of careful rigging and checking. Paul and Ankit did a great job making this one safe for us. It had an awful start with each abseiler starting about a metre above the joining knot in the rope. This made starting very tricky and somewhat scary with a 30 metre dark, wet drop below. Bec showed great skills and handled this abseil a lot more gracefully than most of us.

The next abseil brought us out of the dark constriction, through a narrow slot into the bright sunlight and down a beautiful waterfall. It was very overhung and after dropping off the wall, everyone swung straight in under the waterfall, much to the amusement of those below.

We then had a quick scramble down the mountain to the warm Capertee River for a splash, victory photos, a cold beverage and the inevitable pack up and long drive back home.

A big thank you to everyone for coming along and particularly to Paul for his leadership and abseiling skills.

In all, a fantastic weekend with the perfect combination of good weather, some nice canyons and great company.

Paul found a nice looking digital camera in one of the canyons on the weekend. In an amazing coincidence, he was able to trace its ownership back to a couple of SUBW-ers who had lost it on an exploratory trip a few years back. They were delighted to have their photos returned. This follows on from Paul tracing the SUBW owner of a lost PLB we found in the Wollongambe River last month.

Appendix A: Animals of Coorongooba

Abundant Kangarooos, Wombats, hungry Possums, at least 2 small snakes, an ex Koala (Koalas and canyons don’t mix), native yabbies – the blue/green ones, not the delicious looking exotic red ones and the lesser red-necked four wheel driver – which is sadly not yet extinct. Notably absent: the particularly habituated enormous goanna that has made a real pest of itself on previous trips.

Appendix B: Birds of Coorongooba