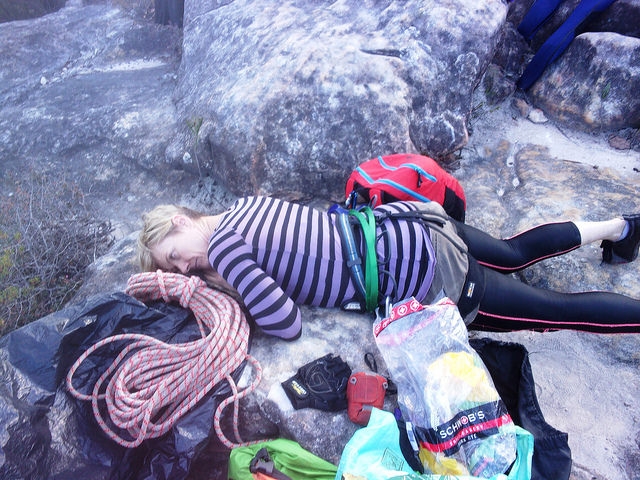 This unusual trip was organised because when we listed a Claustral trip last month (cancelled because of rain) lots of members got in touch saying they really want to do Claustral but can never get on a trip when one is listed. People are sensibly reluctant to run their own trips if they have not done the route before, because Claustral is a very long, hard day and there are a number of navigational challenges. Because of the need for speed, both over the whole day and to get through the cold, dark ‘rooms’ inside Calcutta Falls without getting too cold, trips in Claustral need to be kept small. Four people is ideal, so trips fill up pretty much instantly.

In response to popular demand we decided to effectively run a number of separate trips in one day. We ended up with four groups of four, with Paul, Adrian, Tony and Marty as leaders, starting 20min apart between 08.00 and 09.00. Everyone was a reasonably experienced canyoner, as Claustral is definitely not suitable for beginners, and about half of whole the group very experienced, so the job of the trip leaders was primarily navigation. The first group took a set of ropes for each abseil and left them in place, with the final group taking them out. The groups were self-sufficient, with a spare rope, PLB, etc in each group, but we had a radio in the first and last groups to keep the whole thing together and planned to meet up for a ‘Clausfest’ late lunch on top of Camels Hump.

We had fantastic weather – 21C, blue sky and light winds – and despite the rain the day before water levels were low, as predicted by a canyon guide we consulted on Friday. The water must have been very low indeed before this bout of rain. The three abseils through Calcutta Falls went fast even for the first group, as we had prepared ropes of the right length in throw-bags. It was also unusually warm in Thunder Gorge, with the sun directly overhead and shining down into the canyon, so this was the warmest trip through Claustral any of us could remember. Almost everyone took the chance to reverse up Thunder Canyon to the glow-worm cave behind the waterfall, which adds about an hour to the trip. Despite this, the first group was at the exit taking wetsuits off at 13.00.

We all met up as planned on Camels Hump, sharing food and stories, and it was a long while before we moved on. This was partly because of the inevitable hour’s delay to let the last group catch up, but more importantly because, as has become proverbial, it’s very tempting to hang out up there and delay going back into the cold and wet of the exit canyon! The three Spaniards on the trip put on an excellent demonstration of how to take a siesta. However, eventually we got moving again and were back at the cars just before sunset at 20.00.