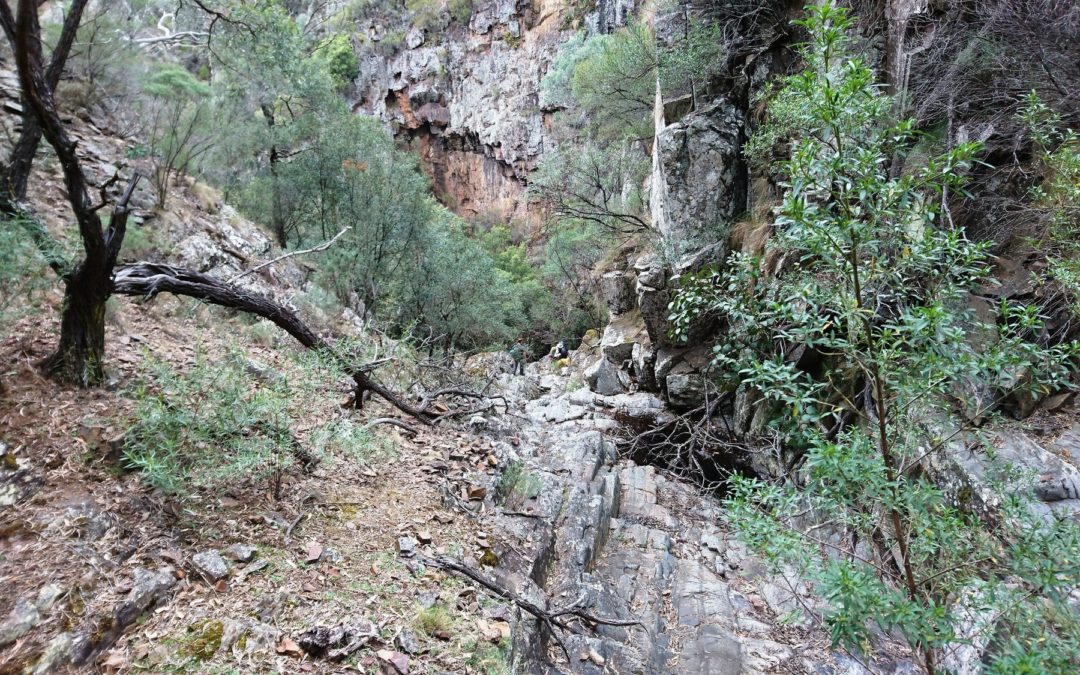 Claustral Canyon is cold enough even when it is not an unseasonably cold and rainy day early in the year. So we switched to Long Gully at Bungonia, a dry canyon in an area where not a drop of rain was predicted. It’s as much an abseil trip as a canyon, with a nice, clean 60m drop, a very pretty 30m and many smaller abseils/climbdowns.

We met at Bungonia at 09.00, minus two people who had looked out at the rain falling in Sydney and decided to stay in bed. A short walk on the firetrail and down an open ridge brought us to the canyon, which is open and rocky with little scrub to negotiate even in the higher reaches. We rock-hopped and did easy climbdowns for some distance before reaching the first abseil. This is an easy one of a few metres that was ideal for showing our two guests the ropes. Not too far beyond this we reached the top of the big, 60m drop, with magnificent views to the Shoalhaven river. Bárbara abseiled down European-style, paying the single rope out from her bag as she went. There are some trees growing out of the rock near the top and there are no concerns about the rope getting caught or tangled doing it this way. Because our two guests were inexperienced we sent them down single rope, but using a second 60m rope for a top-belay, before switching to double rope for the last couple of people. With all the rope work involved in belaying people down and rerigging this abseil took ages and we stopped at the bottom for an early lunch.

Several more short abseils and climbdowns followed before a very nice 30m down a dry waterfall into a narrow section of the canyon – almost a constriction! We could not see if the single 60 reached, so Bárbara suggested a releasable anchor, and rigged one almost as soon as she had finished speaking! In fact, it is a bit short of 30m and a single 60 is fine. A few more short abseils and we were very close the river. We finished with a 25m abseil into the nearest thing to a constriction we had seen – we even had to step to one side at the bottom to keep our feet dry – immediately followed by a short abseil that could be downclimbed if necessary.

After another snack break and filling our bottles from the river (we had seen no drinkable water in the canyon) we climbed the steep, narrow ridge that intersects with the Trestle Track, from where is a couple of km back to the parking area. The exit ridge is as pretty as the canyon, with some very easy scrambles, great views, and whole plantations of grass trees.

The trip was done very slowly, with a lot of chatting, snack breaks and abseil training, as well as being a big group, and took us seven hours. It could be done in a lot less.

Long Gully is a great option for winter or bad weather, with lovely views of the Shoalhaven Gorge.