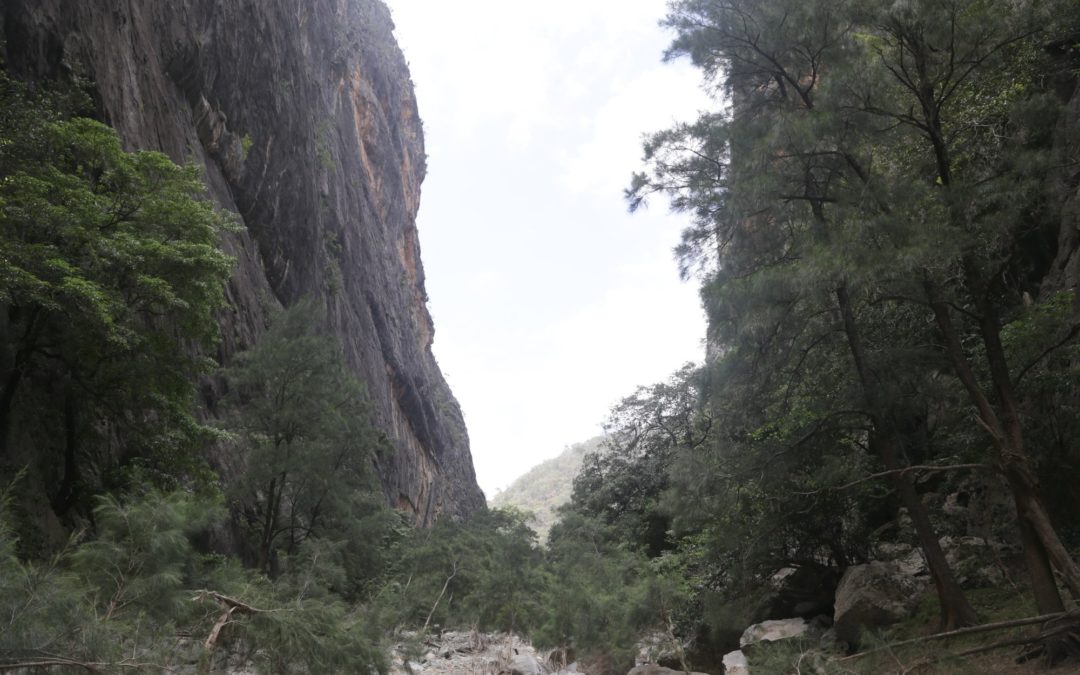 Bungonia Gorge has some great walks. It has a spectacular 400m deep canyon, lovely river scenery as well as good views from the top. Additionally there are limestone caves to explore although some require permits and proper caving equipment.

I have done this walk a few times before,  for doing Himalayan training, and soon  Kosta  and I will be off to Nepal on a SUBW listed trip to trek around the Manaslu massif , and attempt the 6200m Larkya Peak, in December, so this walk with it’s massive elevation change is perfect to get those leg muscles in shape!

On Saturday mid morning, we started the steep descent into the gorge . Our group was truly international, with  Italy (Leonardo) , China (Stella) , Holland (Thijs), India (Ashwin) , Germany (Kosta) , Russia (Boris)… and, well, I’m from Tasmania which is overseas too!   It was quite chilly on top but this soon gave way to more milder temperatures as we descended. Thijs and I were the slowest with most of the party skittering their way down the very steep slopes in record time. But we enjoyed hearing the birdsong and the wonderful views along the way!  An hour later after a short rest we began going down the floor of the canyon. It is blocked by massive boulders so it’s a good scramble over under and through to find a way out. Thijs and I discovered a lyrebird in the bushes, which was timely as he was asking me about them earlier. At the lower end there is what I call the “Crystal Pool” which is fed by a cave stream. The water has a greenish cast and is very clear. Last time I led a walk here we took a swim only to discover it was full of large and rather daunting eels!

Further down the river we had a brief lunch, which included discussions about Boris’s clever “pre made hamburger” lunch, and Stella’s uncanny knack of buying matching gear including a turquoise pack, jacket, socks and boots without having planned any of it! Then, instead of taking the “Red Track” exit straight up and out, we took the untracked route down the creek which is easy to follow. It leads all the way out to the Shoalhaven River. For some reason, although I know this way well, I thought there was a track. There isn’t, buts quite easy to navigate as long as you cross the creek before each bend to avoid small bluffs. We found an echidna feasting on ants, which was of interest to many who hadn’t seen one up close. Towards some well established but charming campsites near the Shoalhaven we found a pool that begged for a swim. Kosta took the plunge first then a few other brave souls followed. It was a bit brisk but a lovely place for a dip! The weather for the whole day was “Goldilocks”…not too hot, nor too cold…just right!  We had a short session of skipping stones across the pool which was fun, then more walking through tall whispering she-oaks took us out to the banks of the Shoalhaven River. It’s a beautiful spot and we passed by two lucky campers spending the night by the river. Then it was the moment we weren’t looking forward to…the 400m ascent!

The first 200m are the hardest and very steep,  but the elevation gain is fast and our well matched group all made good time to the spur at 350m. OK , so I was the slowest…again!  After that, the grade got easier with a short sting in the tail near Mt Ayre. But then it was a cruisy walk back to the car with a short detour to look inside one of the caves. Dinner was at a Chinese restaurant in Marulan which is pretty good food wise. The wait staff were baffled at how such an international group knew each other. Well.. the love of bushwalking / hiking is universal, so it really brings people “of all walks” together. But I also told her that we all just met at the airport that dayJ

Thanks to all for a great day out!