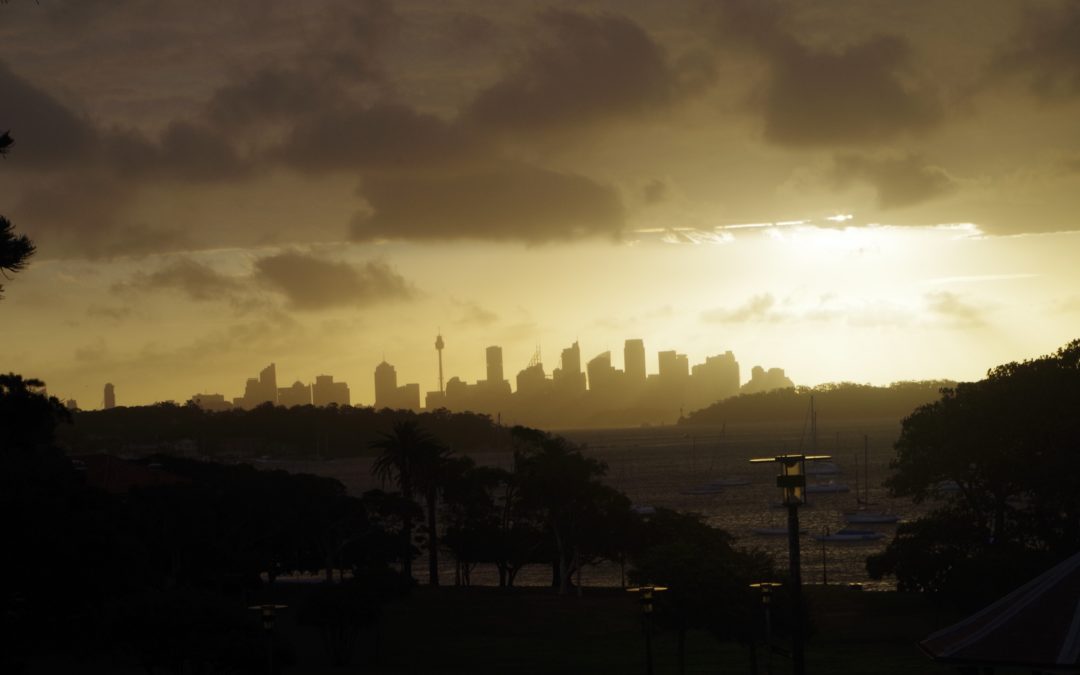 Originally 8 people signed up but 4 dropped out, with one person not giving a reason.

So I first met Cathie at Bondi Junction Station and as it was early we spent some time in the air-conditioned comfort of David Jones’ coffee shop on that hot day. Then on the bus to the meeting place at Bondi Beach.

Eliza and Elodie met us at Bondi beach and we set off on the walk.

Up til then it had been a hot day at the beach, about 34 degrees with heaps of people on the beach and in the water. Yet the very minute we set off on our walk, the strong southerly change hit, with strong winds and the temperature dropped to about 22 degrees almost instantly. The beach emptied out quickly, with sand whipped up by the wind feeling like sandpaper on our skin. We were glad to leave the area as we headed up Military Road.

First stop though was Eliza’s favourite fruit shop at North Bondi. then we continued along Military Road north for a while, as Eliza had new shoes and was concerned about betting heel blisters, so she walked barefoot. Unfortunately on her first step without shoes, she trod on that scourge of summer lawns, the Bindii (Soliva sessilis). This nasty little lawn weed had sharp seeds to catch unwary feet. (It is an import from South America – it is not native).

So instead of Eliza’s normal deviation via Raleigh Reserve we stayed on Military Road until Lancaster Road. (For architecture students this is an interesting walk). At the end of this street a track runs above the cliff edge for some distance until reaching Diamond Bay Reserve. There was another reason for sticking to Military road: the weather forecast had been for late rain showers, and the clouds had started to look threatening. Indeed we saw a couple of lightning flashes out to sea. Also the wind had picked up and was very strong. As Eliza had dressed lightly, expecting the afternoon to have remained hot, we made a detour to a friend’s place to pick up an umbrella and a jumper. Then we continued through Diamond Bay Reserve, battling the strong wind and noticing a few rain drops – but nothing worth putting on rain cover.

Another 250 metre road bash then took us to Clarke Reserve and then Christison Park. Within this park Macquarie lighthouse is located as well as a few World War 2 bunkers and old gun emplacements (once accessible but now locked). Still buffeted by the strong wind, we continued along the path which skirts the cliff top until reaching Gap Park. Here Cathie spotted the monument to the late Don Ritchie, a local resident who would come out to comfort people considering jumping off The Gap (it has that unfortunate reputation). See photo – I would have missed it if Cathie hadn’t pointed it out.

Until now nearly all the tracks had been street bashes, board walks or paved paths. Suddenly now, a true bush track starts. Well not exactly a true bush track – the railway ballast underfoot betrays its origin. It is in fact the path of the former Watson’s Bay tramline which ran here until the dunces and fools of the Cahill NSW Government dismantled Sydney’s tram system. The last tram to Watson’s Bay ran in 1960. This track is not well known and runs for almost half a kilometre through bushland, with a cliff on one side and a steep fall-off on the other (see photos). It comes out at The Gap lookout and Watson’s Bay shops.

At Watson’s Bay we had a break for some refreshments, then continued along Gap Bluff Road (not a public road and locked at this time, which was almost sunset). From there we went down a very short but rough bush track to get to Camp Cove. Here we admired the sunset at Camp Cove Beach.

Here the South Head Heritage track starts which does a loop via the Lighthouse keeper’s cottage and Hornby Light. On the way we stopped to look at an 1872 cannon in an emplacement built – like most Harbour defenses – to keep out the Russians. I volunteered to climb up and Cathie took the photos! Then at the cottage Eliza recalled seeing a ghostly fire inside on a past walk here. We had a look at the cottage, although all the doors and windows are firmly shuttered. No ghosts this time. Meanwhile, a cruise ship was passing out through the Heads and we took to the old Searchlight Centre nearby (as a few more spots of rain were felt) and we watched the ship pass by. It would have been nice to have been on it. (Historical note: the Searchlight Shelter was built in 1938 and during WW2 housed a searchlight to look out for enemy ships. It proved useless spotting the 2 midget Japanese submarines that got into the Harbour in 1942, and German ships kept well away from the Heads, waiting until getting to Broken Bay to lay mines).

Nearby is another historic 19th Century gun emplacement – minus guns (again built to keep out the Russians), which was explored, and the nearby Hornby Light, built in 1858 and still in use. At this point, the wind picked up again and with it came a very brief but heavy rain shower. It was the only time we needed a rain cover. Then it was back via a loop track to Camp Cove Beach where the girls sat in a shelter looking into their mobile phones while phoning restaurants and taxis. The eerie glow on their faces from the phones scared a child who had come onto the beach with its parent, who thought they were ghosts (well, it was almost Halloween). After several phone calls to restaurants trying to find one still open or not full (nearby Doyle’s was closing in 20 minutes), we eventually got an Uber taxi to Bondi for an Indian meal at Namaste on Hall Street. There was a bit of “fun” when the Uber driver suddenly decided he was a private car dropping friends off when we spotted a rather inebriated group trying to hail it.

After a very nice meal at Namaste Eliza got an ice cream at a local spot, and then I hailed a taxi to take Elodie first home to Woollahra and then Cathie and myself to Central Railway. This was an interesting walk with great sunset views of the Harbour and the City, and even the weather was mostly kind. Despite threatening rain, there was only one brief rain shower almost at the end of the walk. Unfortunately the continuous strong wind put out of the question the wearing of witches hats. There were no “no shows”.