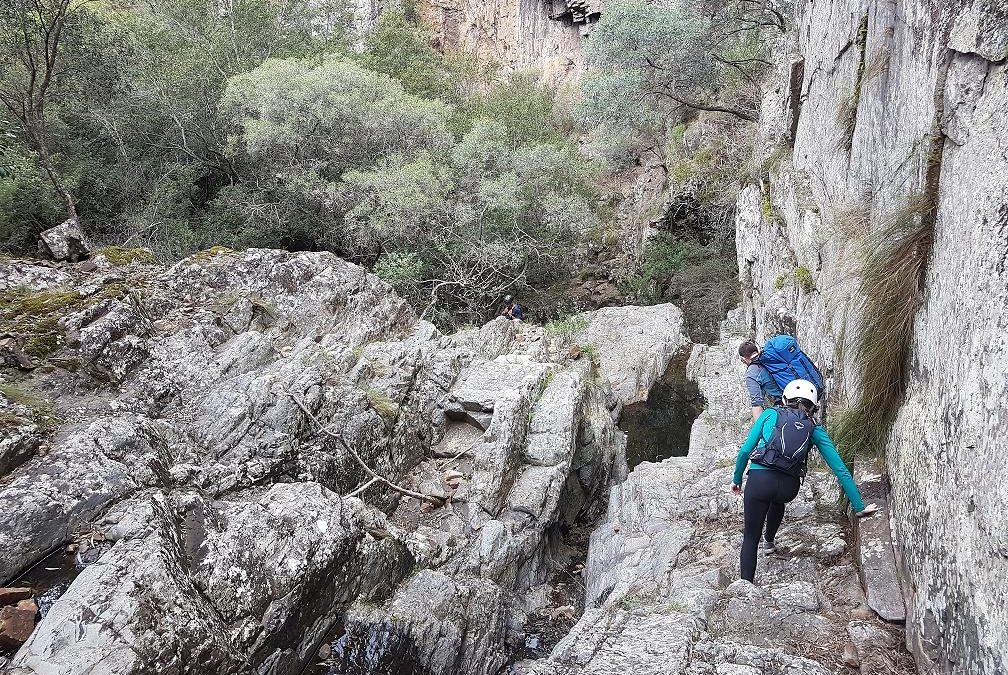 An early start was needed to do long gully so I proposed a relatively early meeting time to be at Hungry Jacks Marulan. I carpooled with Marc at the Bunnings crossroads carpark with Marc driving his Subaru forester.

We then drove down to meet the rest of the group at the Southern bound Hungry Jacks in Marulan. Eve got a lift with myself and Marc in his car from hungry jacks and Ankit with Rebecca followed us out to the start of the firetrail.

Upon arriving at the beginning of the firetrail for long gully Ankit left his car and everyone jumped in the forester for the short drive to the trestle carpark. At the carpark we donned our packs and sorted out how many ropes we were taking which were 4 ropes in total for safety reasons plus two UHF handheld radios and our own personal outdoor gear.

We then set off down the firetrail to where the trail crosses over long gully. Ankit had a smaller pack that couldn’t fit the rope so I showed him how to make a rope backpack which made it easier for him to carry the rope. It was about half an hour to 40minutes of walking down the dry creek that is the upper reaches of long gully till we reached the first abseil.

Upon arriving Eve found a petzl shunt, prussic and some carabiners that someone had left at the top of the abseil near the sling that is on the chockstone. She has the items with her and has posted on ozcanyons on facebook hoping for the owner to come forth. Just in case anyone in SUBW knows the owner just let me know and I’ll pass the message on.

Marc set up the abseil for the first drop with my 9mm 40m static which is a relatively easy abseil just a bit slippery in places where the water is flowing over some patches of granite. Not far along is the second and main abseil of 56m. It was quite a windy day so care was needed for the rope to be setup. Luckily for us the direction the wind was blowing was favourable by pushing us into the cliff and not over the large drop.

Marc used his rope as a safety line to safely setup the two 60m ropes for the abseil. I got both ends and tied them together with a double fisherman’s bend knot. Then Eve and Ankit wanted to have ago tying their own double fisherman’s knot. In the end we had a solid knot for joining the two ropes together. Once the main line was setup Marc made an isolation loop with a double alpine butterfly tied back into the focal point. The point of this is to make it safer for the first person to abseil down. Once everyone was down I untied the knot and made my way down.

There are loose rocks in Long Gully canyon and I was at the top of the main abseil watching the wind knock the rocks down below from a cliff opposite from me. The group was safe in a sheltered area whilst bottom belaying. We used the UHF hand held radios to communicate to each other with the main drop being as high as it is and on a windy we would have trouble hearing each other.

The abseils after the main one vary in size from 5 metres to 25 metres with some down climbs along the way.

We used the 40m for some of the shorter drops that are literally next to each other by simple doing the pull down from the previous abseil and immediately setting up the next one at the same time.

We stayed dry by avoiding the small pools of water in the canyon by down climbing around them.

After we finished all the abseils we stopped at a flat rock outcrop overlooking the Shoalhaven river for a quick lunch. Ankit decided to go for a quick dip in the water before deciding it was slightly cold so jumped back out again. There were some ominous clouds lurking over us so we quickly packed with the clouds only bring a very brief shower of some very light spitting rain for a few seconds.

It is an easy walk passing through small river boulders and nice grassy campsites on the the way to the bottom of the trestle track. The climb up the trestle track and walk along the firetrail back to the cars didn’t take as long as I predicted. From the lunch spot to the cars would of taken less than one and half hours.

Once back at the cars we dropped Eve off at the Northern bound Hungry Jacks and rest of us went and got some Chinese at Marulan and took it to the Marulan Pub to have dinner. Their bistro was closed so we decided to bring it back to the pub pay for some beverages and they let us use the dining room.

After dinner we bid our farewells and departed for home