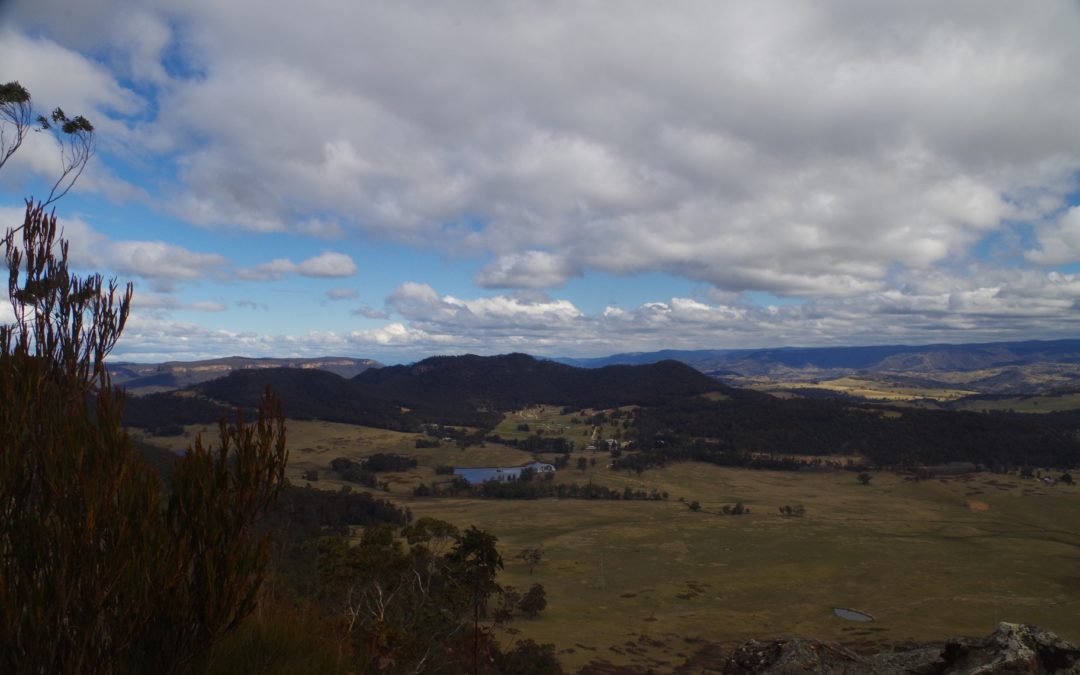 Trackwork on the Northern Line caused a slight change of routine for me, needing to drive to Gordon Station and picking up Candice at Wahroonga on the way. At Central we got off that North Shore Line train and waited on the same platform for the Blue Mountains train to Mt Victoria which was only 5 minutes behind (unusually starting from North Sydney due to more trackwork at Central).

Here we met up with a couple more of the walkers. Unknown to us, however, as Candice and I got off the North Shore train, Wendy and Jessica got on it by mistake! All was still not lost, however, as that train was a Penrith train which ran ahead of the Blue Mountains train as far as Granville, and they could have got the right train there. Unfortunately they got off the train at Redfern on realising they were on the wrong train, but the Mt Victoria train did not stop at Redfern. So it was a matter of seeing Wendy and Jessica on another walk sometime.

The rest of us settled in for the long trip to Mt Victoria. At that station we met up with Liam. It was 7 degrees with a cold wind which made it seem more like 2 degrees. Then there was an inevitable road bash along the Great Western Highway to Mt York Road where Frances was waiting for us. Another 1km road bash took us to the start of Lawson’s Long Alley trackhead and also the track to the Lockyers Track start. I had not done Lockyers track before, and although overall shorter than Lawson’s Long Alley, it covers a longer distance in bushland (the last section of Lawson’s Long Alley is through farmland). At the Start of Lockyers a couple of people with a dog set off ahead of us. Now, this section is not in a national park but is on Crown Land and dogs are allowed if on a leash. But this dog wasn’t, and it was a pity that the dog was there as it would have scared off any wildlife. As it turned out we didn’t see any animals on this walk (unlike on past walks in this area).

Lockyer’s track stays level for a long way as it stays on top of a ridge extending into the valley of Hartley Vale. Along the way there are several small rock pagodas, miniature versions of what can be seen in the national parks further north. After a while the track starts a steep descent down into Hartley Vale, still following the old road of 1823. Eventually it reached the junction with Cox’s Road track,and then a bit further on we reached the picnic area at Hartley Vale. Some were glad there is a basic pit toilet here!

After lunch we started along the track of Cox’s Road. This is undulating through woodland for quite a while. After passing through some open country (and along a series of poles put down as stepping “stones” during wet weather), it starts up a quite steep track until reaching the top at Mount York. The steepness makes one wonder how it was possible to get bullock wagons up and down this track when opened as a road in 1815. It is not surprising it was soon replaced by Lockyer’s Track in 1823. The 5th and latest attempt at a pass down the west escarpment of the Blue Mountains is the present Victoria Pass. There are places where evidence of the work of the original convict teams which made this road can be seen.

Once at Mt York there were great views over Hartley Vale (where we had been), and there were a pair of abseilers there as well.

Up to now the weather had been cold, windy but sunny. Dark clouds could now be seen down south in the vicinity of the Jenolan area (“those clouds are looking pregnant” said Frances)and so it was time to make our way back to Mt Victoria Station. From Mt York a walking track more or less follows Mt York Road so there is no need to walk on it until Lawson’s Long Alley Trackhead. There was a lookout along the way giving great views over the Megalong Valley an the mountains to the south around Kanangra-Boyd. The clouds were getting closer and darker. Eventually we reached Frances’ car at the service station at the Highway and Candice, Joyce and Gong opted for a lift to Mt Victoria Station to get an earlier train home. The remaining 6 of us continued on to the Station, stopping at a coffee shop for some welcome warm food.  We said goodbye to Liam at the Station, and while waiting at the station the wind picked up, and it felt like standing in front of an open freezer door! And then as the train approached the first few drops of light rain came along. Then, as the train proceeded to Blackheath we looked at the view south towards Megalong Valley. Well, there was no view, it was a white-out! We had left Mt Victoria just ahead of the light rain and snow.

Eventually we arrived back in Sydney and went our own ways.

It was a good trip in cold but sunny weather (most of the way) and everyone enjoyed the walk in a less often visited area of the Blue Mountains. There was one “no show”.