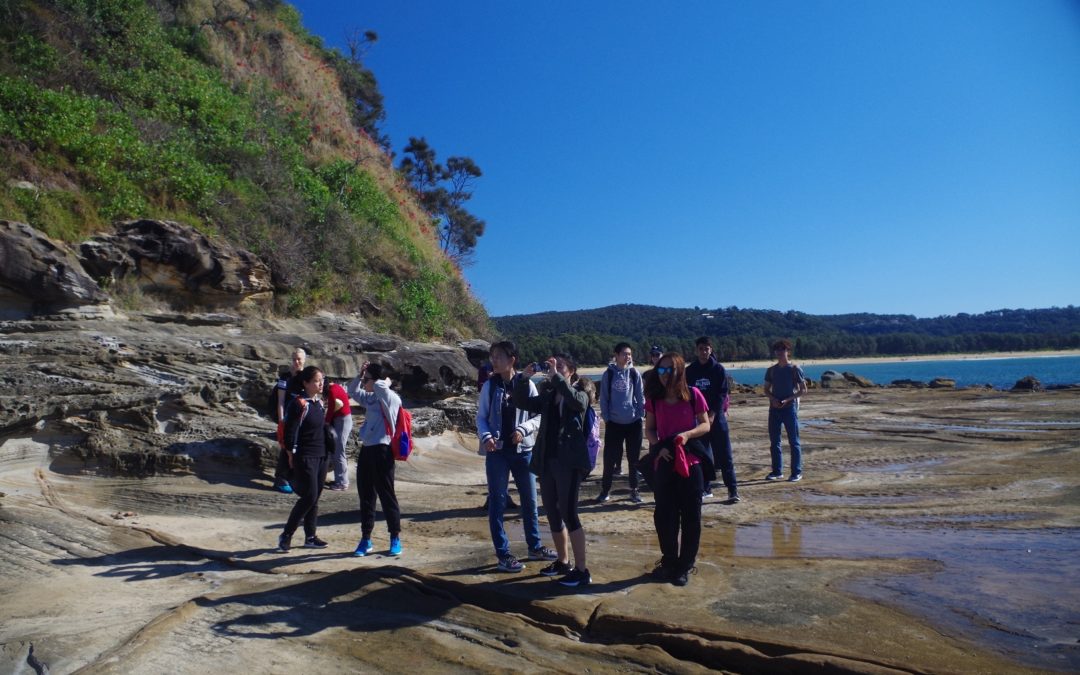 As can be seen, a good turnout including some who joined up in 2nd Semester.

We all met up at Woy Woy Station and I got everyone onto the bus for Umina Beach. All that is except Gong who had dozed off on the train and forgot to get off at Woy Woy, so he got carried on to Gosford! It was fortunate for him that I had decided to drive to Woy Woy instead of taking my local train there, so I was able to collect him off a Sydney bound train 5 minutes after the bus had gone. So I, Gong, and the rest all met up at the south end of Umina Beach. We then set off for Pearl Beach via some rock hopping and the rock platform. Along the way a local know-all suggested we go back and use the road instead (road: no footpath, narrow, plenty of traffic!) as the way ahead was dangerous. She sad that there had been a rock fall (“so I have been told”). Anyway I had wanted to take people onto the rock platform anyway and then I could inspect if there had been a rockfall. From the rock platform there are three pathways up the cliff to the old road (now a pathway) to Pearl Beach. I couldn’t see any evidence of a recent rock fall anywhere but decided to take the first track up the cliff which is the one used when it is a high tide (although today it was a low tide).

From there we followed the track to the north end of Pearl Beach, and along the way there are fine views of Lion Island and Barrenjoey (near Palm Beach). Then we walked along the beach to the shops and then to the Crommelin Arboretum where we had morning tea. (The Arboretum is devoted solely to locally native plants including the palms seen in the photos). Along the way we saw a couple of Bush Turkeys, including a male scratching up leaves etc for his nest.

Them I decided on a bit of excitement by going up an old path which starts at the Sydney Uni Field Station nearby. It is a rough track which eventually joins up with the Pearl Beach-Patonga fire trail. From there it was a gradual uphill walk to Warrah Lookout which gives better views of Patonga and Palm Beach as well as the Hawkesbury Estuary.

Then it was on to Patonga via the fire trail for about 500 metres, then a track which starts dropping down steeply to reach Patonga. This section is part of the Great North Walk. Then we headed straight for the Fish and Chips cafe for lunch (this is probably the only walk where there is a cafe half-way along!).

After lunch we returned back the same way except for Grace, Lin anf Yiling who wanted to go to Palm Beach (to see where “Home and Away” is made?) and waited at Patonga for the 3pm ferry to Palm Beach. Meanwhile, we were entertained at Patonga inlet by a pair of Eagles diving for small fish (it is also a reminder why no one except tourists swim at Patonga – the small fish also attract sharks!). The remaining 12 of us climbed back up the steep grade and then along the who of the Pearl Beach-Patonga fire trail, not turning off until reaching the streets leading to the beach. With a 50 minute wait for the next bus, Stuart went in for a swim (“exhilarating!”) and Sara and Stine went for a walk past the rock pool.

At last the bus came, and took everyone back to Woy Woy Station for the 5pm express train back to Sydney (except me). It was a good walk in fine sunny weather on the warmest day that week.

One person missed the trains at Central and asked was it the sort of walk where she could catch up. I suggested only if she got a taxi to Pearl Beach (not a cheap ride), so she decided not to proceed. A couple pulled out sick, but there was however one outright “no show”, not good since I had someone on a wait list.