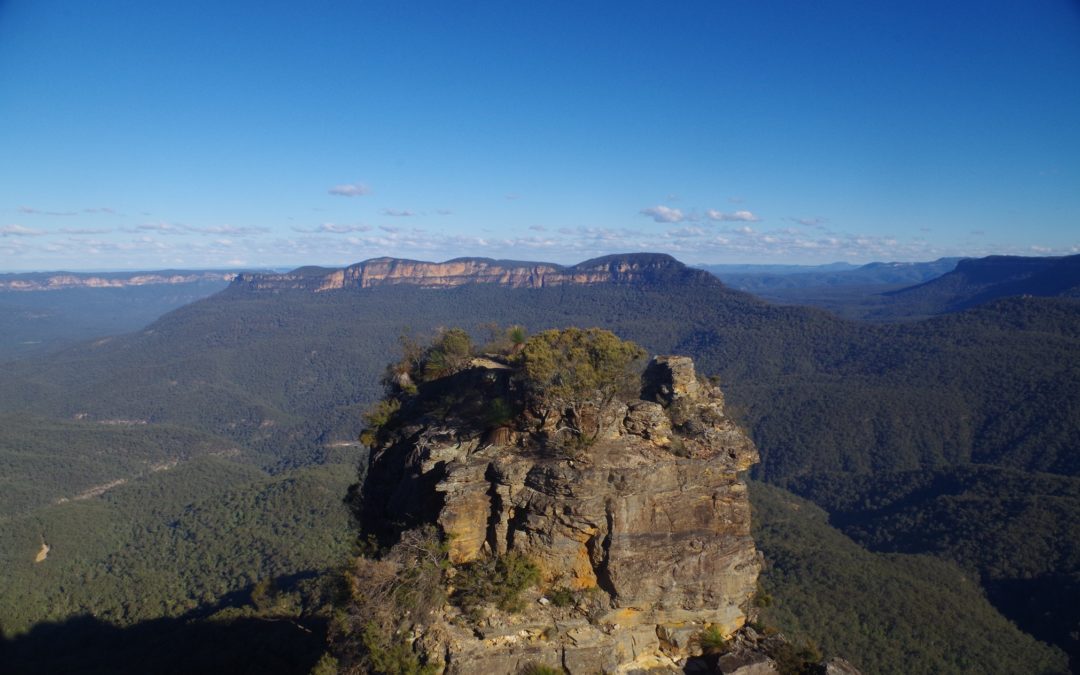 6 people was not a bad turnout for a saturday walk in the middle of exam period. I originally had 11 sign up but 3 pulled out for health reasons, and 2 just pulled out – didn’t give a reason. At least there were no “no-shows”.

It was not really “mid-winter”, being just 3 days after the winter solstice (June 21), but that’s the name given to the festival at Katoomba on the closest saturday to the winter solstice. (Some people from the Northern Hemisphere might say we don’t have winter here at all!!). As it turned out, the weather was perfectly clear all day, but was also the first few days of the onset of cold weather. On my way to the station I was greeted by the sight of a very bright Venus shining high in the sky.

Anyway, we made our ways by train to Leura Station in the morning, with an early departure and a change of trains at Penrith for 3 of us to beat the overcrowding often experienced on trains going to this festival. Cathie however got caught out with trackwork on the Illawarra Line and departed Central 55 minutes behind the rest of us. Originally I would have instructed her to walk straight down Leura Mall to Gordon Falls Reserve, this being a direct route whereas we were going there the long way via Lyrebird Dell. It turned out however that due to our own trains being delayed, she was only going to be 35 minutes behind us at Leura. This gave the rest of us the opportunity for loo stops and coffee at a cafe called the Wayzgoose, which gave us decent coffees in a warm room. Cathie met up with us there.

So we set off for Lone Pine Reserve and then to the Pool Of Siloam. The track was drier than usual as there had been no rain for a week, but still a bit muddy and slippery in parts. After checking out the Pool of Siloam (a popular swimming spot in summer) we then headed up the “Never-ending Steps” to Gordon Falls Reserve. The down to Gordon falls Lookout. There was a clear view all the way to Mt Gibraltar near Bowral in the Southern Highlands. We proceeded along the Prince Henry Cliff Walk which has no shortage of superb views over Jamison Valley, the King’s Tableland, and Mount Solitary, as the photos show. (Apparently the track is named after Prince Henry, son of King George V). We reached the lookout of Tarpeian Rock where we had lunch in a sunny spot on this cold day. Then it was on to the junction with the Leura cascades Track. We stopped her for some time lapse photos of the Cascades. Then down to the intersection with the start of the Federal Pass track. This goes down some fairly steep metal steps and eventually we ended up at the base of Bridal Veil Falls. At this point I cautioned the others not to stop from here on until the other side of Leura Forest as we were approaching Leech country.

So we set off through a ferny gully until reaching Leura Forest. Noticed some people at the picnic tables (unwittingly collecting leeches??) and also a Bush Turkey (probably also collecting leeches for lunch). This is the first time I have seen a Bush Turkey in the Blue Mountains – historically they were never seen south of the Hawkesbury River until the 1980s. Dardanelles Pass starts here – not well signposted I should mention. We started off along that Pass, and came across a male Lyrebird with full tail dashing across the track – too fast to be photographed. Later on another Lyrebird was seen scratching in the leaf litter – probably a female as it didn’t have the long tail feathers. We came to the bottom of the Giant Stairway below the Three Sisters. As we wanted to take in the Festival on Katoomba’s main street before going home, we decided to go up this very steep stairway instead of going to the slightly easier Furber’s Steps, which would have added 45 minutes to our walk. So up we went, with several stops on the way up, both for rests and to allow tourists coming down to pass us at “passing loops”. (I got the impression that a lot of these tourists would be going back up via the Scenic Railway – I was telling them that it is $15 one way, but their website says $21 for one-way out of the Valley!!). So at last we reached the top of the Giant Stairway which it right at the Three Sisters, with hordes of tourists. After a loo stop at Echo Point, it was a road bash to Katoomba’s main street and all the festival stalls which were selling all sorts of things. As we were bound to get separated in the crowds, we all split up here and went our own ways. Zhong stayed in Katoomba, camping out. The rest of us got back to Sydney around 6.30pm.

Everyone seemed to enjoy the walk.