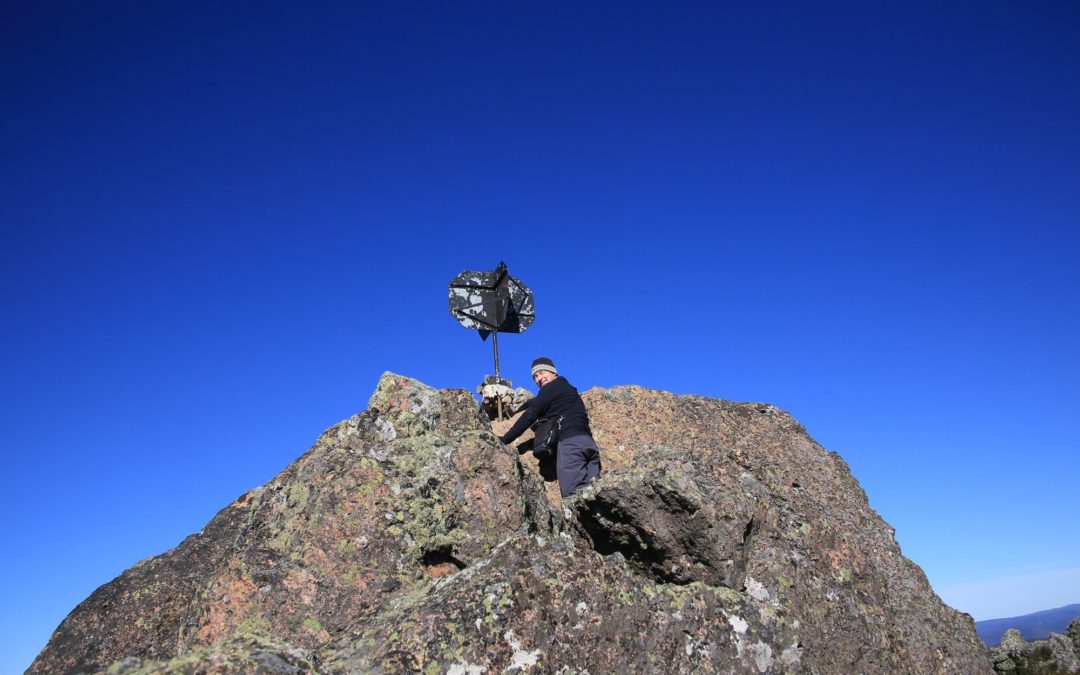 Some mountains are so remote , they can remain on your “to do” list for a long time. Such is the case with the Cobberas Mountains in far north east Victoria. Although the area can be accessed by road, it’s a long way from pretty much everywhere. But the Queen’s Birthday 3 day long weekend allowed just enough time to drive down there, have a go at the summit of Mt Cobberas Number 1, then get back home again. Having found a few other SUBW members crazy enough to commit to the 10 hour drive ( each way!) we all headed off to the region south of the Snowy Mountains on the NSW / Vic border. Heavy rain was falling in Sydney but the weather became much better as we headed south. After negotiating the notorious Barry Way, passing by the magnificent Snowy River, we  headed west via the oddly named ghost town of Suggan Buggan. We found a nice campsite near the foot of the mountain. Just in time to make a nice campfire and enjoy a gourmet smoked trout meal expertly cooked by own “MasterChef” Derek. A full moon graced a lovely but chilly night in the high country bushland as we watched the frost forming on our tents from early on in the evening.

Despite its remoteness, this region is popular with 4WD enthusiasts, and we saw a number of weekend warriors camping out and playing with their Monster Trucks. And dogs. And chainsaws… In a National Park… Don’t get me started…

We were up before sunrise to get an early start, since we had a return walk of 21km to do. It was a very frosty morning and we had to wipe a lot of ice off our tents. The trail head was not far away, but had my little 4WD been able to negotiate the rough Cobberas Fire Trail to Playground Plains, we could have cut off 4km each way.  The track was just too rugged for my little 4 x 4. We watched a big Nissan Navara go up the trail ahead of us… it found the going easier with its high clearance.

The walk was lovely though as the frost had turned the forest and open areas into a frozen white fairyland. An hour from Limestone Road we encountered a group of (more civilised ) 4 wheel drivers camped at Playgrounds. They’d had to winch each other out of sections of the fire trails they were exploring.  We set off up the plains on a marked but at times, vague track, which then veered west up the mountain.  The track appeared quite old,  but there have been some new markers put up which I found to be very helpful. There are many brumbies in this region and apart from all the pony poo in enormous piles,  there were tracks going all over the place which meant it was easy to get off track if you didn’t pay attention, or have some previous bush navigation skills. My GPS proved to be very useful here! Soon we had climbed to the snowline and although it was steep, it was very enjoyable. Just as long as we stayed on the track! After 3 hours from leaving our car, we were on the main ridge line but with 250m more elevation to gain the summit. The track was still fairly easy to follow, with care,  and the views got better as we got higher. The snow got a bit more plentiful but never difficult. We saw one set of footprints ahead of us but they only went up , as the person had not returned the same way. Then the tracks disappeared suddenly, and we knew the trail ahead was ours alone. It was a mystery where the other person had gone.

By 1pm we had reached the 1835m high rocky summit and the views were spectacular. The long wait to climb Mt Cobberas Number 1 was totally worth it. Views to the Bogong High Plains, Mt Bogong, The Pilot, Snowy Mountains Main Range and East Gippsland were breathtaking. We all took a photo at the top and admired the views across to snow speckled Cleft Peak and out to Mt Cobberas Number 2 which is the lower peak. We enjoyed our had lunch in a pretty spot out of the cold wind. All too soon we needed to turn around for the 11km return walk. On the way back we met Darren who had driven up from Metung, ( in Vic) just for the day. It was his Navara that had passed us earlier. He had gone out towards Cleft Peak but found it was too icy. So, he was the mystery walker!

We let him speed off down the mountain, as we took a more relaxed pace coming down. However as luck would have it, Derek managed to catch him before he left Playgrounds and so we all scored a lift along the 4km last section of fire trail! After such a big walk, it was total bliss not to have another hour bashing along a fire trail at the end of such a great day.

That night we camped along Barry Way beside the Snowy River, tired but happy. Because of the mountains of horse manure we had walked through on the Cobberas, we shared many (bad) jokes about ponies (inspired from the “Seinfeld” TV show).. “My father had a pony , my sister had a pony, my mother had a pony, we all had a pony…We loved those ponies !”

Well maybe not so much the ponies, but we all loved the Cobberas!

It won’t be so long before I come back to see more that’s for sure.

Big thanks to Nolan for her optimism and navigational prowess, Derek for his masterful camp cooking skills , and Candice for her endless energy and enthusiasm. You all get a pony!