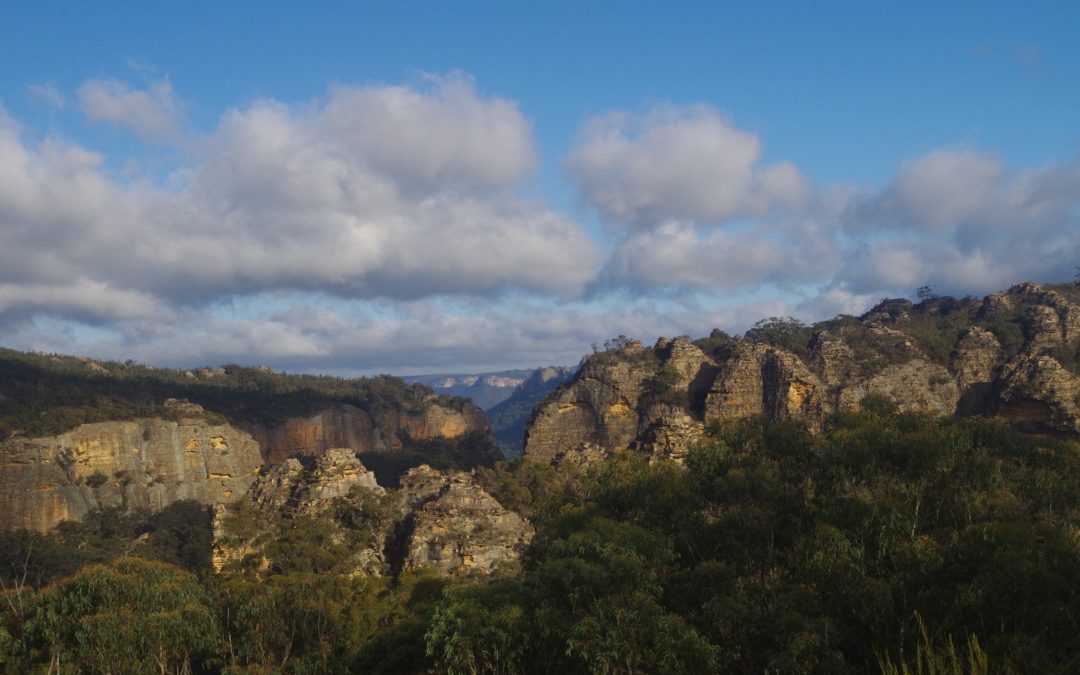 We all met up at Strathfield and set off in Victoria’s car and mine for the drive to Mount Victoria. The railway station loos were used for our comfort stop. After a short break there we then set off for the start of the track which was once a narrow gauge oil shale rail line to the top of the escarpment above Hartley vale. This was to be the Saturday afternoon walk to supplement the main walk to the Glowworm Tunnel the next day. When we got there however, we saw a gate with the words “private property” written on it. This was a surprise as I always thought that this was Crown Land, and some years ago I led a SUBW walk along it (and also down the incline to Hartley Vale village). It is possible that it has been put on a long term lease, as the present NSW Liberal government is allowing leasing of Crown Lands. (This is also the government that decided to allow hunting in National Parks, so nothing they do would be surprising). Also noted that the gate was the type at National Parks put across their tracks, but there was no “no admittance” sign.

So an alternate walk was instantly planned and it was a walk along the Zig Zag railway. We drove to near Mt Sinai and then started walking along the Zig Zag line. Cathie got concerned that a train might come, but I assured everyone that Zig Zag was still awaiting accreditation before they could resume services on this tourist line. Cathie then posed the question: “What if their accreditation was approved yesterday?” Anyway we continued along the track, passing some old carriages that had escaped the disastrous 2013 bushfire that did so much damage to Zig Zag Railway, but not immune to graffiti people. Eventually we reached the lookout next to the three stone viaducts of the railway, which constructed in 1869 as part of the Main Western Line, but bypassed in 1910. Here we had lunch and admired the view. Then it was back to the cars. Passing the abovementioned train carriages, the girls got in and posed as passengers!

Then we continued on to Clarence and the start of the dirt road to our destination, Tiger snake canyon car park. At first the road wasn’t too bad, for a dirt road. Noted several dirt bikers along the way. But after we passed the junction of Clarence Road and Glowworm Tunnel Road, it deteriorated, and got worse after Bungleboori picnic area. This meant a slow run continually weaving around (and sometimes through) potholes. This road is never wonderful but this is the worst I have ever seen it. Noted that there had been clear-felling of the pine forests on both sides of the road, so there would have been recent heavy vehicle traffic. Once we reached the northern boundary of the State Forest and entered the Gardens of Stone National Park, the road surface improved, and after Dean’s Siding, where the road to Tiger Snake leaves the Glowworm Tunnel Road, it was much better for the last 5km.

We arrived at Tiger Snake car park, which is also the start of the Old Coach Road track, and noted other cars there but no people. We looked around for a suitable campsite, but decided on camping at the start of the track to Tiger Snake and Penrose canyons. Meanwhile, a party of 3 who had done Penrose Canyon passed through, and a bit later another party who ha done Tiger Snake Canyon. Both packed up and left leaving the site to ourselves.

So we set up tents at dusk and got a camp fire going. As firewood collecting is discouraged here, I had brought along four large chook-food bags full of wood and a couple of logs, from home. It all eventually ended up being burnt, except for a small quantity of twigs which we left for the next party that came there.

After dinner we went for a walk down the Old Coach Road Track until reaching a clearing where we sopped and looked up at the stars. I had chosen a weekend with a New Moon for this trip, which resulted in a perfect dark sky for star gazing. We could clearly see the Milky Way, the Southern Cross and the Pointers, and Scorpio rising in the east. It was a beautiful sight. The back to the campsite and the cosy camp fire, and later to bed.

Next morning we were up early so as to beat the tourists to the Glowworm Tunnel. The fire had survived the night – just, and I was able to get it going enough for heating water for breakfast and Cathie’s coffee. We struck camp, packed up the tents and put out the fire, so that by 8.15am we were on our way to the Glowworm Tunnel. I decided to do the Old Coach Road/Pagoda Track/Newnes walking track loop which would take about 4 hours (8-9 km).

So we headed off under a cloudy sky which eventually dissipated ending in a sunny morning. We walked along the ridge top at first which give great views of the rock pagodas which give the Gardens of Stone NP its name. Then down the Pagoda Track to reach the old Shale Railway formation. We headed down that and at one point had a short break while Cathie had a comfort stop. It was a fortuitous break, as overhead I heard the distinctive “tarrred tarrred” call of the rare Glossy Black Cockatoo, (Calyptorhynchus lathami). Joyce spotted them high in the trees – a trio (probably a pair with a large chick). This cockatoo is listed as “vulnerable” in NSW due to clearing of habitat and the illegal bird trade. See http://www.environment.nsw.gov.au/animals/GlossyBlackCockatoos.htm which also mentions it’s endangered in the ACT. These birds were the only wildlife we saw apart from a couple of male Lyrebirds which ran across the track in front of us, but they were far and away the best.

Soon we entered the Glowworm Tunnel which is horseshoe shaped and perpetually dark in the centre. They didn’t give that good a show this morning, but they were still impressive. Unlike most rail tunnels, this one was never lined with brick or concrete so the Glowworms had plenty of sandstone rock surfaces to cling to.

We had the tunnel to ourselves – as planned (which is why we set off early on this walk). While in the tunnel however, we heard some low moaning sounds which the girls thought might be a ghost (or at least the Ghost of steam trains past), so quickly left the tunnel. The “ghostss” turned out to be two walkers who had entered the tunnel some time after us. After passing through the tunnel we were in Penrose Gorge (not to be confused with Penrose Canyon). Until 1975 the track from here on all the way to Newnes was straightforward and level, but in that year a big cloudburst caused several washaways on the old formation including here at Penrose Gorge. So the track now goes up and down several washaways before reaching its junction with the Old Coach Road about 4km further on. Still, it provides excellent views over Wolgan Valley. Couldn’t help noticing though that several huge slabs of stone have fallen from the cliff face since the rail line was lifted in the 1940’s. Makes you wonder if there are still some huge slabs still waiting to come down…

Along the track we noticed some square poos from local Wombats which required inspection….

Eventually we reached the Old Coach Road track junction, which is also the boundary of Wollemi National Park. We continued up the Old Coach Road track which is a continual climb except for a short saddle. Along we way we heard the tinkling calls of many Bellbirds (Manorina melanophrys) in the trees. Then we reached its junction with the Pagoda Track so we had thus completed the loop. Then back to the cars for the drive back to Clarence. Again we endured the potholes where the road passed through Newnes State Forest. On the way up I had spotted a new cafe at Dargan (between Clarence and Bell) and decided to stop there on the way back. It is well sited, giving views south west to Hampton as well as over the Wollongambe Wilnreness and Northern Blue Mountaions. Mt Yengo (near Cessnock) can be seen in the far distance. So we had afternoon tea with scones, cheesecake and coffee. Then it was the drive home, encountering the usual Blue Mountains traffic. A train overtook us just after Mt Victoria and we didn’t catch up with it again until almost at Woodford. It had also started to rain with intermittent light showers, and Amanda was able e to get a photo of a bright rainbow (see photos).

This was a good trip with good weather and clear skies (until Sunday afternoon anyway). Everyone had a good time. For Cathie it was first time camping, and she wants more! Pity about the potholed road, but it seems that most of the best bushwalks start at the end of dirt roads (but they’re usually much better than the Glowworm Tunnel Road).

No “no shows” either.