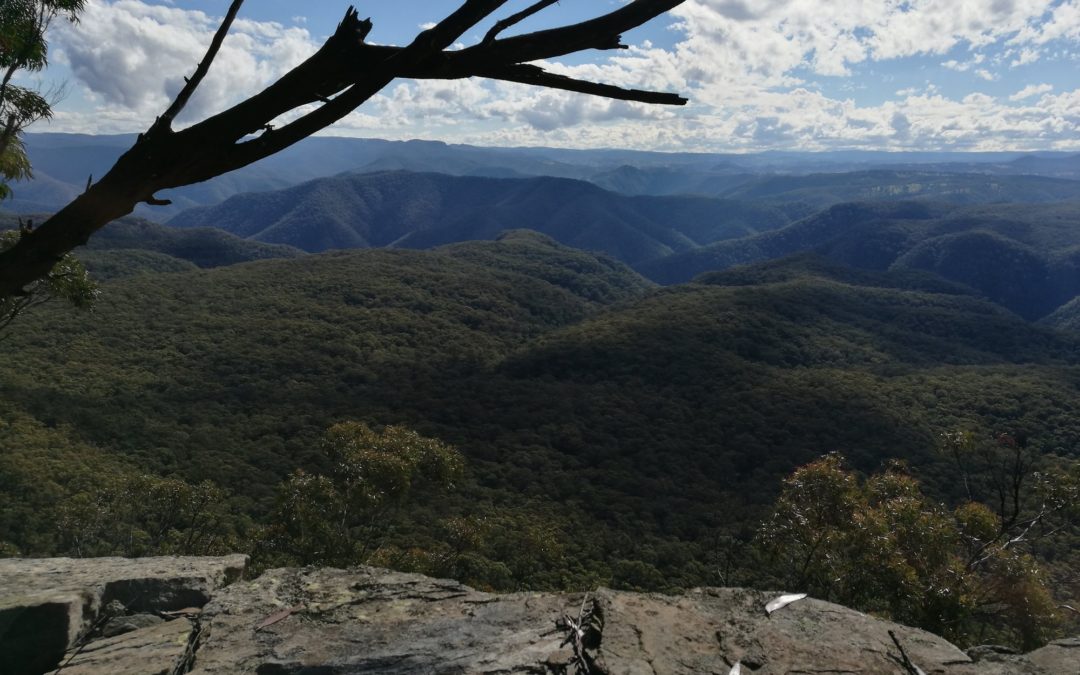 The group met at Blackheath station bright and early, a bit smaller than anticipated with 2 pulling out in the days leading up and 2 no shows. With a lot more space in the two cars than anticipated, we set off down the megalong road, managing to avoid some enormous potholes on the way. Arriving at carlons farm, we were surprised to see that someone had managed to get a caravan up the hill and set up camp. Climbing the stile, we set off up the steep climb onto the bellbird management trail and a short firetrail bash through to the intersection with the medlow gap firetrail. Making a right we walked past the series of high tension power line towers that the firetrail services, stopping for some morning tea at medlow gap itself. The eastern peak of mt mouin was just visible above the tree tops, looking quite imposing high above the forest canopy. We set off down over the gate and past the turnoff to mobs soak, now signposted, a bit easier to spot than the old cairn. At the top of the next hill we turned off to the right up an old 4WD trail that runs up a spur next to the trail. Climbing steeply up the clear but slightly overgrown track, we contoured up around the mountain. The trail ends at a rock platform partway up the mountain, with a large cairn and the first clear view back down the valley towards narrowneck. The next section of the climb is off track, contouring up around into the gully that runs up onto the saddle. This section is very steep and quite unstable underfoot with scree and leaves making it quite tough to find firm footing. We came up faster than anticipated, arriving on top the saddle before hitting the gully, we ended up climbing more up than diagonally around as intended.

We had lunch on the rock platform on the eastern end of the east peak with spectacular views of tinpot ridge around to lake burragorrang in the distance. The view from the south-western platform of the east peak is the best view of lake burragorang that I have seen, much better than from splendour rock. After lunch we set off over the western peak, and staying on the top of the ridge, climbed around to Blackhorse mountain and then straight down off the other side of Blackhorse mountain directly towards mt warrigal into Blackhorse gap. We hit the trail that runs out of the gap and descended down towards the 5 way intersection at Blackhorse ridge, crossing straight over the track to mt solitary and following the quite indistinct trail to the end of Blackhorse ridge, where there are some nice views of the upper breakfast creek valley. We descended the very steep 400m to breakfast creek with only a one instance of a slip followed by a bruised ego and backside. After changing into long pants, we crossed breakfast creek and walked the short distance to carlon’s creek. By this time it was late afternoon and the sun had disappeared behind the ridge, giving the shady sections of the creek a very sombre feel. The climb out was fairly easy, except for the occasional nettle runners that have started to grow down from overhead vines, I was only saved from a faceful of nettle by the brim of my hat. We arrived at the carpark tired but leech free, taking a short while to air out our boots and admire the group of subcontinental glampers who were riding quite gingerly around the hill on their peewee motorbikes. A consensus was reached to get fish and chips before we got the next train, we raced back up to Blackheath and demolished half a dozen large fish and chips, a most agreeable end to the walk.