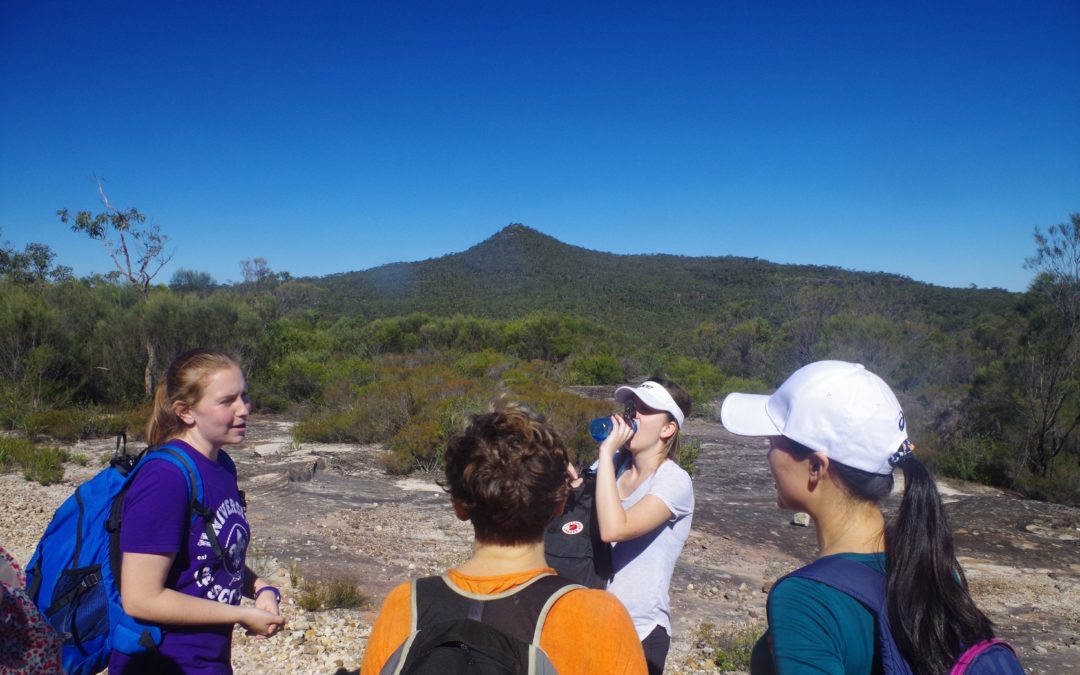 Most of us met up wuth me at Wondabyne Station – except Natalia, who found herself in the front 4 cars of the train and couldn’t get off at this small station. She was unaware of the requirement to be in the last car, and also the usual recorded announcement about having to be in the last car was not played by the train guard.

So Natalia had to ride forward to Woy Woy and change there for the next train south, which required a 20 minutes’wait. To make things more complicated, we could not call her, as there is no mobile phone coverage at Wondabyne (except for emergency calls). So, we had to start off on the track up the hill out of Wondabyne until we were far enough along the track to get phone reception. It was just in time too, as Natalia was already on the train at Woy Woy by then, and she also would be out of mobile phone coverage once her train entered Woy Woy tunnel in 5 minutes’ time. So I gave her directions about where to find the track at Wondabyne, but to be sure, the others waited while I back-tracked to the top to the steep track out of Wondabyne to check she was coming up the hill OK. She was.

So once Natalia had joined us we set off along the Girrakool fire trail until reaching the junction with the track to Myron Brook and Kariong Falls (these are all part of the Great North Walk – GNW). This track suddenly becomes rocky and with sticky clay underfoot in some places as it passes a hanging swamp. At this location some Sundews – carnivorous plants – were seen (see photo). As the die off in winter, they would be gone in just a few weeks, not to return until Spring in September. Also, some of the Banksia flowers had some nectar in them after the morning dew.

The track continues along dropping gradually for quite a while, and crossing large rock platforms which are common in this area. Then it starts to drop rather steeply as it approaches Myron Brook. Part of this track has been damaged by successive heavy rain events, the latest of which in late February/early March (you may remember how wet it was during O-Week). In some places it is a rock scramble rather than a track.

We had a brief stop at Myron Brook, not staying too long as it is the one place on this walk where leeches are possible. Then on to Kariong Falls for a morning tea break. These falls are located on Kariong Brook which further up passes through a Scout Camp, so drinking the water is not recommended. In summer, some locals use the pool as a swimming hole.

Then we continued up the slope on anther rather steep climb to the track junction with the fire trail to Staples Lookout. Turning right here, we continued along the GNW for a while, passing through some pleasant open forest. At one point Victoria spotted two Eagles circling overhead. The track deviates from the fire trail and passes through heathland and along more wide rock platforms. At one of these were Indigenous tool sharpening Grooves – hard to see in the overlying algae (see photo) and easily missed. There are muddy sections along this track also, but eventually it comes out at Tunnel Track, so named as it follows Woy Woy Tunnel. Just before Tunnel Track there is a small stream which has (usually) clean water, and I topped up my water bottle here. After 500 or so metres the track to Mt Wondabyne starts on the left. This is a stony track which rises gradually at first then rather steeply until levelling out just before Mt Wondabyne. Halfway along these is a log book which I filled out for SUBW.

The side track to the summit itself is a fairly short but steep climb and you are not at the summit until right at the end of the ridge. There are some false “summits which give good views and there were several photo-stops and selfies done at these! But we eventually got to the trip at the true summit, and settled in for lunch, enjoying the views which stretch as far as the Blue Mountains, and east to the sea. Part of the view west was obscured, though, by bushfire smoke, maybe coming from a RFS controlled burn. I had a thought about continuing along the GNW further east and ending up at Pearl Beach. That track is 2 km longer than returning to Wondabyne Station but is easier. There is however a 4 km stretch which is on a flat straight boring section of fire trail through heath – OK in Spring when the wildflowers are all in bloom. I knew that there was one bus per day from Pearl Beach at 4.17pm which we could make with a bit of time to spare. But just the one bus…

Weighing this up, I decided to return the group to Wondabyne Station. This turned out to be fortuitous, as Jingyue thought that she had sprained her ankle on the track coming back down from Mt Wondabyne. Some time was spent assessing her ankle and it seemed that she was OK to walk on it, as there was little pain and no swelling, and we decided that a compression bandage wasn’t needed. Even so, her shoes didn’t seem to give much ankle support, so Natalia, who has the same shoe size, swapped Jingyue’s shoe on the sore ankle for one of hers which had good angle support. All went well for quite a while and we reached Kariong Falls without too much problem. The steep climb along the rough track to the Girrakool Track junction, however, lay ahead now. We took our time along this so as to not put too much strain on Jingyue’s ankle (and also Xuan Trang was slowing down as her knees were getting sore). On reaching the Girrakool Track, we had a very brief rest, and then, with 35 minutes to train time, set off down to the station. For most of the way there track is easy and wide, until reaching the heights above the Station, where it drops steeply down the slope for the final 10 minutes of the walk. Most of us made it with just 3 minutes to spare, although a couple had to wait at the foot crossing gate until the train was in the platform, to dash across (just as well there was no kilometre-long freight train coming the other way, which has happened in the past!). That included Natalia who had to do a last-minute shoe exchange with Jingyue! The train departed with everyone on board (except for myself as I was travelling in the opposite direction). there was no time for formal goodbyes, but they all waved to me as the train pulled out, so I hope that they all had an interesting walk. If we had walked on to Pearl Beach, which would have taken the same amount of time, we would have missed the 4.17pm bus. Pearl Beach is doable on this walk, as long as everyone starts off at Wondabyne without delay (we had a 25 minute delay), and there are no mishaps.

This was a good walk on a fine clear day. The track could do with a bit of repair as some “steps” were becoming mini cliffs due to washaways from several recent heavy rain periods in the past 2 years. (The April 2015 storms did the most damage).