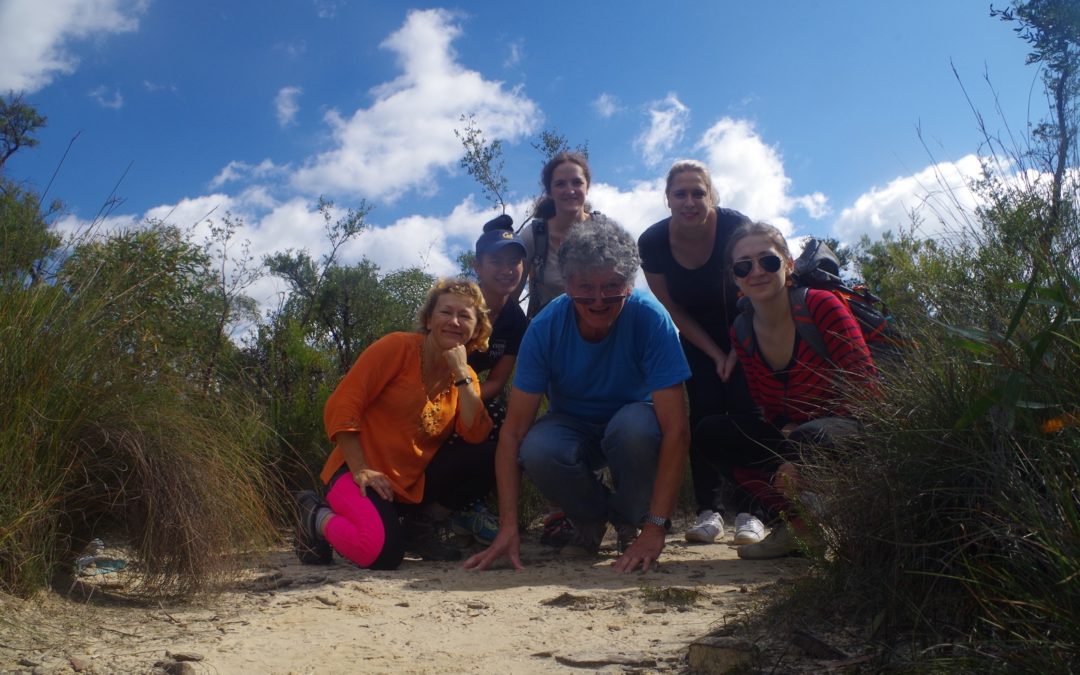 Given the short notice of the walk (just 36 hours) I was only expecting a couple to come. Yet we ended up with 6 walkers, and there were two others who enquired but decided not to proceed for health reasons.

Most of us met up at Central for the train with Ségolène getting on at Strathfield (we met up with her at Wentworth Falls Station). From that station we set off through Wilson Park, then a 2km road bash via Falls Road and Fletcher Street to the Conservation Hut.

As it was an exploratory walk, to take unknown tracks, I decided to do the Nature Track loop which starts just off the Conservation Hut’s car park. This at first not a particularly hard track, and runs fairly level for quite a while behind the houses of valley Road. It was not long before we left the sound of the leaf-blowers and civilisation was soon left behind and the track dropped into the bush. At one point it was a mere 150 metres from the highway and the railway but you would never know. Eventually we got to Edinburgh Rock lookout, and then the track dropped down to follow the Valley of Waters Creek. There are some narrow sections here on rock ledges but eventually comes out at the starting point for canyoners doing Empress Canyon. (If you just wanted to do the canyon you would go there directly down the Valley of Waters track from the Conservation Hut).

Then we crossed Lillian’s Bridge a bit further down. Standing on it were about a dozen younger guys in a commercial tour group (the ones where you pay $80 or more for the day) who didn’t seem to appreciate that with their packs on it was very difficult to get past them on the narrow bridge. With their tour leader having to ask them to turn so that we could squeeze past, we crossed over and started the climb along the Lillian’s Bridge Track (also confusingly called the Valley of the Waters track on some maps). This goes up a lot of steps that appear never to end but it levels out and suddenly you are at the edge of the Fairmont Resort golf course, and at one point a boardwalk over a sedge covered hanging swamp.

Only a short distance on we found the side track to Inspiration point (and eventually Robert’s Pass). (If you continue straight on, Lillian’s Bridge track eventually ends up at the Fairmont Resort). We went down the Inspiration Point Track until we got to a choice between going to Gladstone Lookout or Moya Point. Moya Point was much closer so we took that short track and once there settled down for lunch – and enjoyed the view over Jamison Valley.

So far the walk hadn’t been too bad. The harder section however was now upon us! So after lunch we set off towards Robert’s Pass, and I gave a target of getting back to the Conservation Hut before 4pm (it was now 1.20pm). On a level track of the same 6 km distance (like last week’s Cliff top track walk to Otford) it would have been a doddle, but Robert’s Pass is anything but! Although I have never done it before, the readings I had done about it left no doubt that it would be slow and relatively difficult. So we went past the sign which said that Robert’s Pass was rough and should be done with an experienced navigator, and it started dropping down fairly steeply on a leaf-strewn track. Obviously it’s not often used. Then it reaches a narrow crevice in the cliff line. We descended through this dark crevice via a metal ladder, which makes a 180 degree turn in the crevice to continue down stone steps. The turn is so tight that if your pack is anything larger than little you need to take it off to be able to squeeze through the turn.

The track continues dropping fairly steeply along a path covered with leaves and also on loose shale at may places. We had to very careful as it would be easy to slip. After a while it reaches a track junction, which is actually the junction with Lindeman’s Pass.That Pass is not signposted as it’s use is generally discouraged by NPWS it seems. It is a fairly vague rough track from there to Sublime Point (from that Point westward it is not too bad). Just before the junction we met a walker going up Robert’s Pass who had gone down Gladstone Pass and did the 2 km section of Lindeman’s Pass from there to its Junction at Robert’s Pass. He advised that there has been a landslide on that section which makes it even more vague than usual!

I did the Lindeman’s Pass as a SUBW walk quite a few years ago (pre-2000 in fact) and I am aware of how vague it can get. On that walk we exited up Gladstone Pass rather than the easier Robert’s Pass as the light was failing, and Gladstone Pass is both vague at first and also wet and slippery. (Some sites and books say it is easier to go down it rather than up, but I am not so sure about that). Gladstone Pass/Robert’s Pass loop is a target for another exploratory walk.

So we turned left to head towards the Vera Falls Track. Near the start there was a tree with a fluorescent pink ribbon tied to it (just in case you couldn’t see the fairly obvious track), but thankfully there were no more pink ribbons until near the junction with Vera Falls track much further on. We continued along this track which varies between being fairly wide and level and being vague and rocky. At one point it follows a rock ledge just half-metre wide for about 20 metres then suddenly becomes a wider track again. I lost count of the number of muddy creek crossings we did (maybe 10). The track passed through a forested area with tree ferns – very picturesque. I asked Ségolène if there were rough tracks like this in France. She said yes, but high in the Alps, not in forest!

Eventually we could hear the sound of Jamison Creek getting closer and closer, and after a few zig-zags found ourselves at the junction with Vera Falls Track. From there it was a climb up another steep rough track to its Junction with Wentworth Pass and then further on past its Junction with National Pass. The creek needs to be crossed here and then the steep ascent up the Valley of the Waters via Lodore Falls and Empress Falls commences. This climb would have to rank among the top 5 steepest in the Blue Mountains (although shorter than Furber’s Steps), but at the top of Empress Falls there are wooden steps from there to the Conservation Hut. These wooden steps are not as steep as the track beside the Falls, but just seem to never end. Go round one corner and there are even more, and then even more!

At Lodore Falls, Maria needed to get back to Leura before 5pm to get some shopping done and as she is a somewhat faster walker on grades than the rest of us, I gave her the green light to continue on ahead. The rest of us slogged up the grade until eventually reaching the Conservation Hut, with welcome and much needed refreshments! We got there about 3.40pm so we did Robert’s Pass and the Vera Falls track climb in less than 2.5 hours which was good timing. Maria had missed the bus from the Hut but got the 4.10pm train from Wentworth Falls to Leura so she got her shopping done I assume.

If we had more time there was the option of returning to the Railway Station via Darwin’s Walk (an extra 2km). We were aiming though for the 4.36pm train so it was a matter of repeating the earlier road bash gain via Fletcher Street and Falls Road back to the station. The walk was made more pleasant though because the deciduous trees were starting to get their Autumn colours (see last 2 photos). At Wentworth Falls we entered a coffee shop as it was still 12 minutes to train time so enough time to order a coffee for Natalia. One of the waitresses thought taht she could do one more but the other said, sorry, just closing up so no can do. Not happy. Oh well, there will be other shops in the Falls to go to next time! Then it was a train trip back to Sydney.

It was a good day in pleasant weather, and I was happy about a good turnout given the short notice of the walk. It was interesting to look at one of the main access points to Lindeman’s Pass.

BTW if you have Jim Smith’s book about this Pass (published in 1990) there have been a few changes. For example the landslide he mentions on Robert’s Pass is more easily negotiated now, probably because more people have since used the track to make the path more clear. Also, the diversion of Lillian’s Bridge track below Fairmont Resort is complete, so no need to cross the golf course.