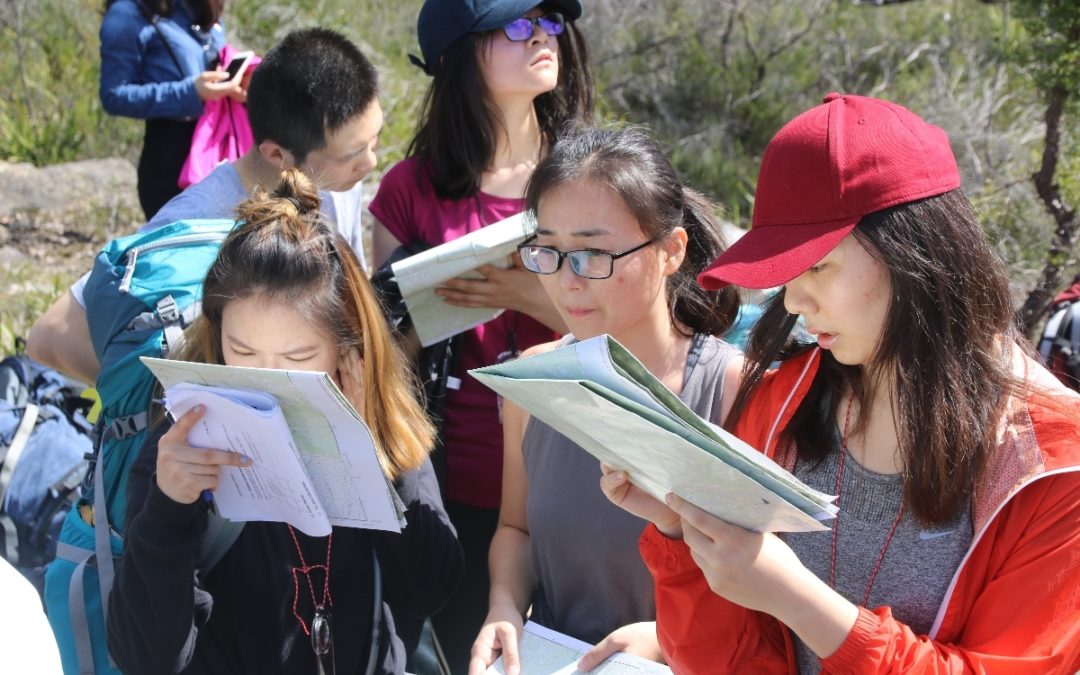 26 people had signed up for this trip before I managed to mark it as full, and then even after marking it as full on the walks programme the emails kept coming and a waitlist grew. The waitlist never got used though, because even by the morning of departure I had 23 confirmed participants. Martin and Loren woke up feeling unwell and had to pull out last minute, but nonetheless very kindly still drove their assigned passengers up to Bell and dropped them at the start, before driving back home to take sick leave. Many thanks to Martin and Loren for not leaving their passengers stranded despite feeling sick.

And so it was that a party of 21 gathered for the beginners’ navigation weekend, a trip that I have now been running in this format for the 12th year in a row. The party milled around Bell station car park for a while, organising gear, packing bags, and distributing a supply of Wollangambe maps that I had ordered directly from the mapping authority specifically for this weekend.

Before setting off on our walk, we had to go over the basics of map reading. Many of the participants had not read a topographic map before so we spent some time studying contours and learning how to interpret them, and using them to form a mental image of the landform that they represented.

Despite weeks and weeks of rain, the day was cool and sunny, with scattered cloud, perfect conditions for the start of the navigation weekend.

Once the students were appraised of the skills needed to read the map and communicate positions using grid references, we set off into the wilderness. We stopped a lot to look at maps and correlate what we saw around us with what we saw on the map. We began descending, a river became visible, we were approaching a large bend, and we could identify gullies feeding into it from the other side.

We crossed a small river, climbed a small gully, and emerged on a ridgetop. Such a route allowed us to pinpoint our position exactly, based on what we knew of the terrain we had just passed through. We climbed a little further to reach high ground and a panoramic 360 degree view of the Wollangambe Wilderness.

Here was a perfect place for lunch in the sun, and there was ample space for everyone on open rock slabs. It was the perfect place to begin some compass work. The group learned to take bearings of distant landmarks like hills and ridges and then to use the compass with the map to identify those objects on the map. This would become useful information to use later, as we would encounter those same landmarks later in the trip. By the time we had finished this exercise it was time to get going, we still had a lot of navigation to do to reach our camp, and with a group this size, we did not want to get stranded.

We descended to the Wollangambe River which was easily crossed by means of a giant leap of faith or alternatively just getting your feet wet. Then came a steep ascent to emerge from the deep gorge and reach the top of a very large pagoda for more spectacular scenery.

The navigation began in earnest now, we were now in an area where there was no path or trail of any kind, and the objective was to set bearings for a road intersection and follow those bearings. Taking turns to lead, we headed up the ridge and then into the scrub and through more featureless terrain that was harder to navigate in. It was time to trust the compass, stay on track, and use cues along the way to crosscheck your position. We emerged on the fire trail 40m from the junction we were aiming for, so a pretty accurate navigation exercise.

From here we had to reach our camp. I disclosed for the first time where we would camp that night and then the group’s task was to work out how to get there. A route was agreed upon and bearings were set. Some of the scrubbiest walking of the trip was this last section, and again the group took turns to lead the way through it. We reached a swamp and crossed it, then gained a low ridge from where it was only a few hundred metres to our campsite. We found a beautiful swampy crater framed by delicate rock forms, a really special place. I led the way the last 300m to the actual camp site, a huge cavern that would provide plenty of space and shelter for all. A hand line was setup to get into it.

Already well ensconced in this comfortable campsite was Roger Lembit, bringing our group size to 22. Wood was collected, we had a supply of fresh clean mountain water from the nearby creek, and we all settled in for the evening. The stars came out and it was a cool clear night, but by morning the clouds had rolled in.

On a grey morning we gathered around the maps once more. The task for the navigators today, unsurprisingly, was to work out a route out of here. How will we get back to Bell and via a new and optimal route? Some time was spent working this out, and then at around 9am we set off. Thanks to the end of daylight savings, we had had an extra hour to sleep in a bit and pack up.

The route chosen, of course, followed the ridges. We emerged at the first big views of the day, and despite the cloud and drizzle, the group learned how to work out their position by doing a resection.  We then navigated back to the Wollangambe River, crossed it at a new place, and then began the gentle ridge climb back to the railway line. We reached a rock platform with spectacular views of the area and there we enjoyed our lunch, and the rain and wind held off.

So with the effect of daylight savings – and successful navigation – we reached the cars early, like about 1:30pm, so today was a much shorter day than yesterday. And even though we had only been together for a little more than 24 hours, many new friends had been made and everyone had enjoyed a great weekend in a special area, and headed home with a new set of skills for next time they head out into the bush.

Until next time.
Ashley Eylenburg