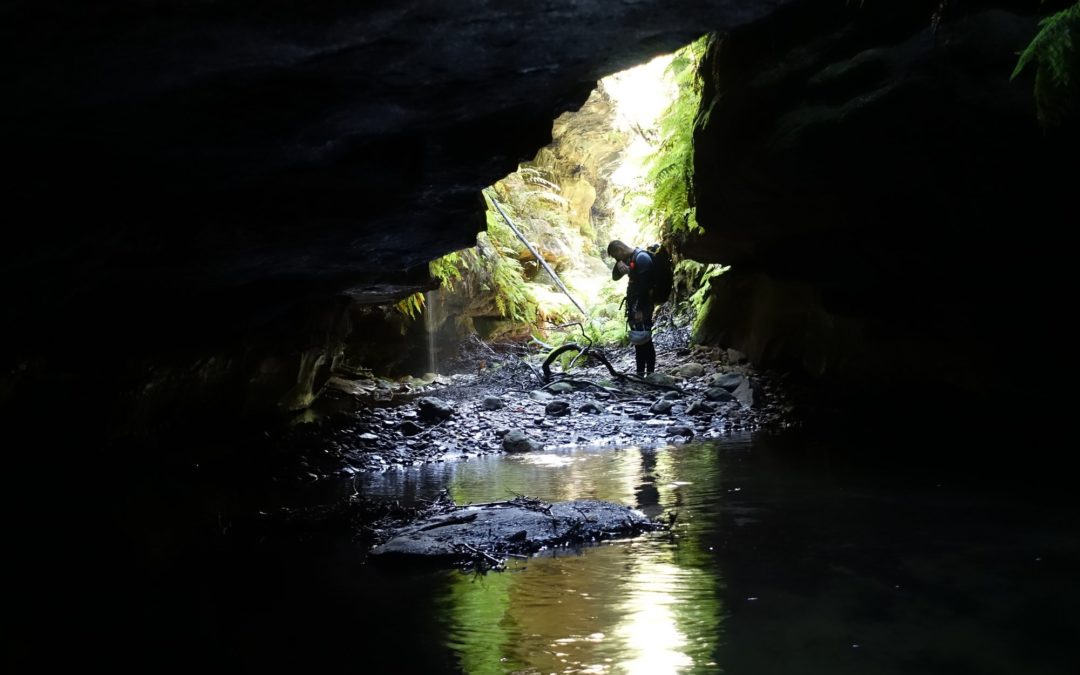 Ron and I to be were joined by two more, then four more, then ultimately nobody as the weather came and went through the week — but the fog lifted to blue skies as we dropped by the Mt Wilson campsite to say hello to Tony’s group before deciding on Serendipity and Water Dragon canyons.

I don’t mind the original name for the former, “Why-Don’t-We-Do-It-In-The-Road”, mostly because thinking through those extra three syllables gives you something to do waiting on the abseils. It’s a pleasant little canyon though, with a fun jump and good abseil near the end.

At the end of this first canyon, the Wollangambe was quite a bit more than ankle deep and moving upstream proved a real struggle, culminating in a short but vicious waterfall that spat me out three times before I was able to clamber up and drop a rope.

Our notes for Water Dragon mentioned a cairn and a track and an abseil to get down to the creek that cuts out the canyon, but we found none of these, instead following a loose slope down to a cliffline we easily skirted to make the creek. The walls soon closed in and after two hand-over-hands we were enjoying the greenery and cooler temps. This upper section is sustained without being deep or having any drops in it, and gets better as you go. A short abseil off a submerged log landed us in a small pool with some curiously set bolts above it, then immediately off those bolt(s) down a thundering 15m waterfall into deep and dark canyon. We each thought this abseil and the lower constriction that followed were one of the best sections of canyon we’d visited in the area.

Back in the ‘gambe, it turns out downstream travel was as especially fast as our upstream travel had been especially slow, and we were back at the exit track and thus the car in no time.