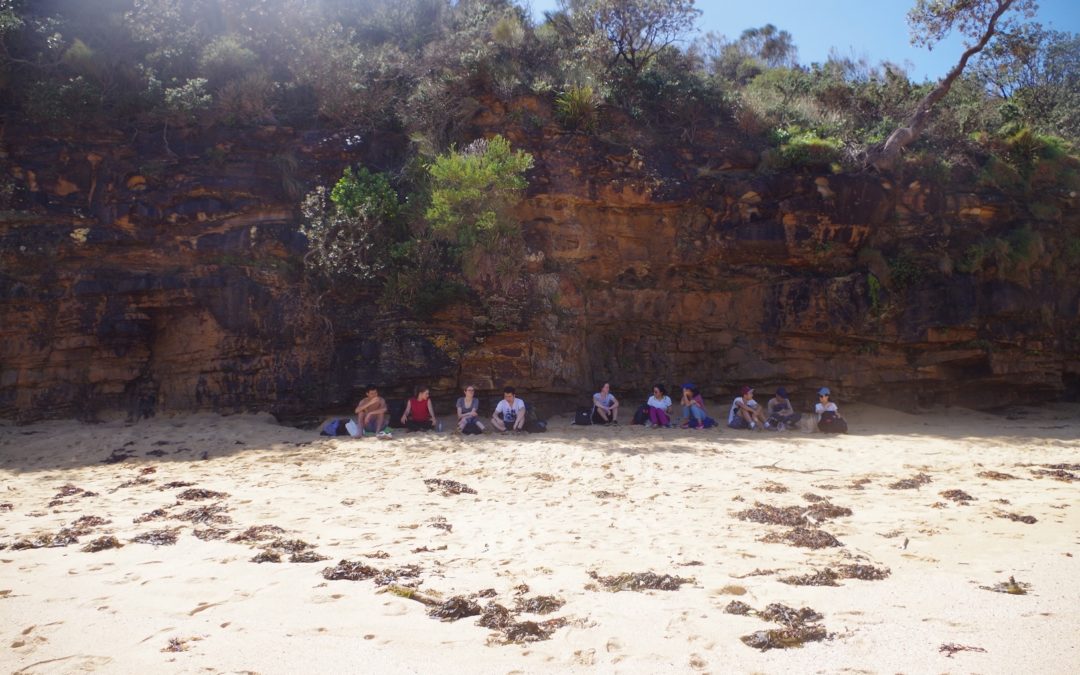 Again, very good luck with the weather, with a near cloudless sky and warm weather.

Most of us met up at Woy Woy Station, with myself and Victoria meeting people off the 9.25am train. Unfortunately Cathy’s group coming up from Sydney in her car were running late, not reaching the station to 10am. Apparently she had run into traffic and “took a long way round”. I suspect a GPS giving “interesting” directions to Woy Woy, as they can do sometimes. It is also worth noting that the train trip from Sydney to Woy Woy is always faster than driving, sometime by up to 30 minutes faster.

Anyway, once we were assembled we set off for the 20 minute drive to Kilcare Beach. Once there, we found that we could just squeeze everyone into my car and Cathy’s, which eliminated the need for a car shuffle and saved about 25 minutes. So Victoria’s car stayed at Kilcare while we then drove to MacMasters Beach. Instead of going to Ocean Drive to start the walk as I have done in the past, we went to the actual beach and parked there.

There is a pathway from the beach road to the next street up (MacMasters Parade), and then via the MacMaster’s Beach Walking Track – at the Northern boundary of Bouddi NP – to Ocean Drive, which then took us to the start of the Bouddi Coastal Track. Then it was along this track to Little Beach. The track down to this beach was rather muddy after the recent lengthy wet spell, as were many other sections of this track further on.

We continued on from Little Beach and up via a moderate climb to the top of Bombi Moor, then along the Bombi Moor Fire Trail. We spotted some odd-looking fungi along the way (see photos) which turned out to be Stinkhorns. There were other mushrooms along the way also. This trail ends above Cave Gully where the narrow Bouddi Coastal Walk proper takes over. It dropped down to caves Bay were we stopped briefly to enjoy the cool breeze (it was getting very warm now) and the view which extends as far as Manly and North Head. It also gives a view of the dangerous Maitland Bay Bombora, a reef about 1 km from the bay on which the S.S. Maitland was wrecked in 1899. From Caves Bay the track rises again on a moderate and fairly rough (and at present muddy) grade to the headland above Maitland Bay, from where it dropped down fairly steeply to the Beach at Maitland Bay. Here we stopped for lunch under a shady rock overhang. Kevin took the opportunity for a swim.

After lunch we set off on the last leg of the walk towards Kilcare Beach. We initially took the track to the Maitland Bay visitors Centre but turned left after about 200 metres for the track to Bullimah Beach and Kilcare (still called the Bouddi Coastal Walk). This is an undulating track which a few grades but also fairly muddy. After a while it enters a forested section which provided welcome shade. We reached Gerrin Point and took in the view, and also spotted 3 eagles circling overhead. From Gerrin Point the track becomes a mixture of dirt track and boardwalk. This section attracts a lot of people from Putty Beach (there is also a short side track to Bullimah Beach). The track stays almost at the clifftop edge until reaching Putty Beach (which is actually the north end of Kilcare Beach. Noticeable at the track’s end was the growth of larger trees here, a result to re-vegetation efforts over the years, including the removal of Bitou Bush. (This is a plant imported from South Africa to stabilise sand dunes, but it has managed to escape and become too prolific).

So we dropped down to Putty Beach, and many of the group took off their shoes to walk barefoot among the waves as we set off for Kilcare Beach, another 15 minutes away.

On reaching Kilcare it was time to do the car shuffle to retrieve Cathy’s and my car from MacMasters Beach. This provided time for the others to sit on the beach or have a swim at this patrolled beach while we three drivers went to MacMasters. So we did the car shuffle, and returned back to Kilcare. Victoria, Cathy, Kevin and myself then took a swim ourselves. It was good to be able to swim this day, as over the past few weekends many beaches have been closed due to rough conditions. Then it was time to return to Woy Woy Station. Cathy added one train person to her passengers, and Victoria took some more back to Killara Station. Gabrielle was meeting her boyfriend at Woy Woy so she stayed there.

Then we all made our ways back home.

It was a good walk along a mixture of tracks, in good weather, and everyone enjoyed it. One person called in sick the previous night, and one person missed their alarm and slept in! Still, the reduced numbers meant that we didn’t have to waste time with a car shuffle at the walk start.

All I need to do now is to get a cable release and light tripod for my camera so I can get in some shots!