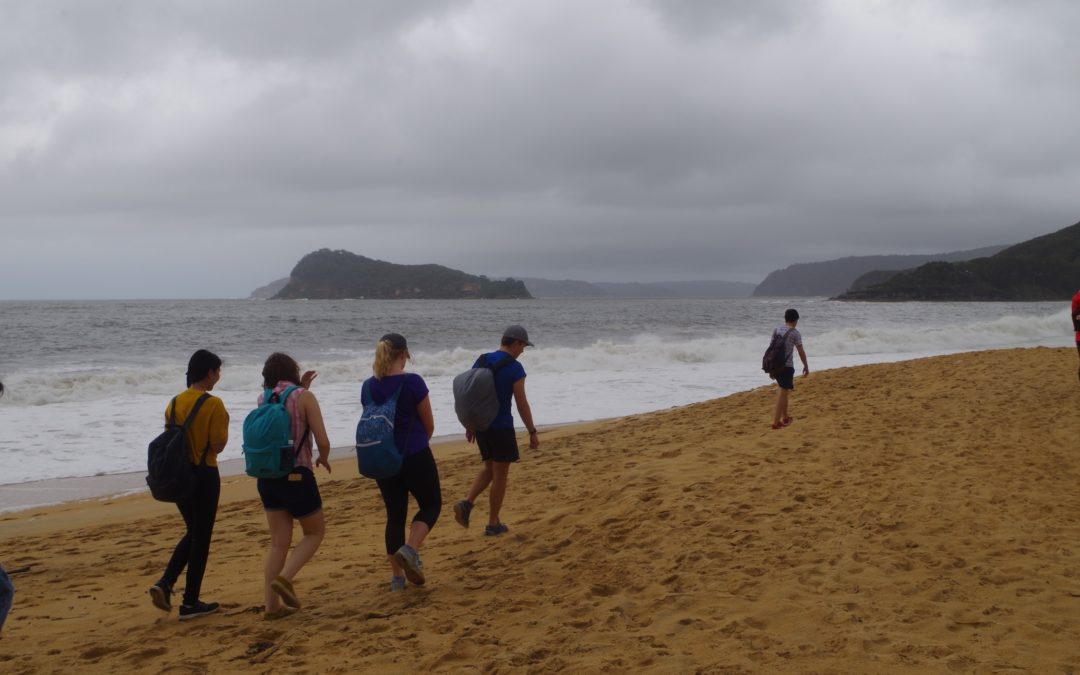 Before I start the walk report, a reminder that if you intend to visit the Royal Easter Show at Olympic Park this year (6-19 April), go to the wool pavilion where there are stalls selling woolen socks for about $8 a pair. These socks are really good for bushwalking in both summer and winter. Woolen socks keep your feet warm even when wet or when walking in snow.

More extraordinary good luck with the weather, with no rain and the sun being out for the majority of the time. Indeed, even though it was still pouring rain in Sydney at 9am, I was able to phone through that it had stopped raining on the Central Coast, and the radar showed no following rain bands.

Most of us met up at Woy Woy station with Nolan being there over an hour early. Mate however, was dozing on the train and missed getting off at Woy Woy and got carried in to Gosford. Fortunately for him there was another train heading back to Sydney in about 10 minutes, and as it arrived at Woy Woy only 4 minutes after the bus to the walk start, I was happy to wait for him and drive him in my car along with Rebecca. (I had intended to drive to the walk start anyway). So after putting everyone else on the bus and letting the driver know where they needed to get off, I collected Mate and Rebecca for the 15 minute drive to the south end of Umina Beach. While waiting for the bus at Woy Woy the sun came out briefly which was a good sign. Cathie, who was on this walk last year, guided the bus group to the beach.

The sea had quietened down from yesterday when I had gone to check the condition of the beach, but it was still fairly rough and murky after the many days of rain we have had. High tide wasn’t due until 1.30pm so it was still safe to do rock hopping and walk a fair way along the rock platform, as long as we kept well away from the edge. At the point I did a group photo, and also there were a couple of board-riders taking advantage of the swell. Then I noticed that Nolan had gone off for a better view of them. She got a bit too close to the platform edge for comfort. I called her back, advising her that a big wave might catch her and she would die! Sure, the boardriders were at the edge, but they had wetsuits and a large surfboard – we didn’t! (I can’t emphasise too much the importance of staying away from the edges of seaside rock platforms, even if the sea looks calm.Too many rock fishermen have been drowned that way when pulled into the water by an unexpected big wave. Keep that in mind for the Burning Palms walk of 9th April).

Because the seas were still somewhat rough, I exited the rock platform via an earlier “track” to the old road higher up Mt Ettalong. This is not as good as the one further down and required some rock scrambling, but everyone got up OK.

Then it was off along this tack (following the old road to Pearl Beach, until we reached that beach’s north end. Sea foam was very noticeable all along the beach, see photo. It is not pollution; check Wiki for a description: https://en.wikipedia.org/wiki/Sea_foam

We encountered a couple of “river crossings” because of the recent rain greatly increasing the flow of streams entering the beach (the ones at Pearl Beach occasionally develop Quicksands, but not this time).

The it was off to the Crommelin Arboretum for a morning tea break. On the way a couple of ladies told us that the entrance to the National Park at the Pearl Beach Fire Trail was blocked due to emergency tree removal happening there. This posed a problem of course, but on a previous walk on this fire trail I had noticed a side track going down the hill somewhere, and I suspected it might end up at the Sydney University Field Station 200 metres further up the road from the Arboretum. The road blockage from the tree removal didn’t affect access to the Arboretum and in fact the tracks in it provided a bypass around the tree removal crane. So while the others had a break I went up the road to find the other end of the mystery track, and indeed found it right next to the Field Station entrance.

So off we went on this track. The first section is not well defined but about 4 trees at the start (at both ends of this track) have tapes attached to show the route. After that the track wasn’t too bad to follow. Indeed at one point it appraed to have had a well made rock wall made as its base, making me think it might have been an old original track (or even a bridle track) to Patonga before the road was constructed to that village. Even so, there was no guarantee that this was going to end us up at the Pearl Beach Fire Trail, which we had to access to get to Patonga, but the old stone construction (possibly 19th Century) was very reassuring. And indeed we did come out at the Fire Trail.

So, we went along the fire trail until we reached Warrah Lookout. It was still quite overcast (as the photos show) but even so it was still a grand view. Then it was off along the Great North Walk (which joins the Fire Trail at Warrah Lookout) and then the track down to Patonga, which was level at first but then started dropping down fairly steeply. At this stage the sun came out well and truly, and remained out for the rest of the walk. Of course with all the water around from the recent continual rain, it was very humid, probably about 90%, so the 26 degrees temperature felt closer to 30 degrees.

So we reached Patonga, did another “river” crossing, walked along the foreshore, and reached the Fish and Chip cafe where we had lunch. As we got there just after 2pm we had missed the lunchtime crowd and service was quick.

During lunch I took the opportunity to teach our overseas students some Aussie phrases, such as “flat out like a lizard drinking” (a lazy person pretending to be working), and “(x) couldn’t organise a chook raffle in a country pub” (referring to an incompetent person [usually a politician] or organisation). I also showed them a useful resource: http://www.oxfordlearnersdictionaries.com/ You type in a word and you can hear how it sounds in both British English (close to what we use here in Oz) and North American English. I tested it with a common word: “tram”, and then challenged it with “chook”. It worked! It also gives the meaning of the word. It won’t translate into another language.

After a good rest we set off again to tackle the steep climb up the Great North walk. It rises steeply by a series of rough stone steps. Near the top we paused at another lookout, and that view was quite different under sunshine compared with what we saw earlier at Warrah Lookout (see photos). Then it was back down the Pearl Beach Fire Trail until we reached the old track that we had come up earlier,and dropped down it until reaching the Uni Field Station. Then it was a road bash along the dirt road in a pleasant forest with houses tucked away within it, until reaching Pearl Beach. By this time the tree removal people had gone so there was no need to detour round the site of the damaged tree via the Arboretum.

We got back to Pearl beach with a bit more than 10 minutes until the bus to Woy Woy came, so we wandered on the beach for a bit. No one had really wanted to swim in the water which was murky from all the sediment being carried down the Hawkesbury River, some from as far away as The Wollangambe River. Then the bus came and we were the only ones who got on at Pearl Beach. I got off at Umina as my car was parked there. I beat the bus back to Woy Woy Station, where I gave farewell to the group to take the train back to Sydney. This was a very good walk with an unexpected exploratory bit added on (the Old Track). And good weather for those on the walk who were willing to take the risk that weather might not have been as good as it turned out to be.

One person had pulled out the previous day because of concerns about the weather forecast, and another pulled out sick, but there were no outright “no shows”.