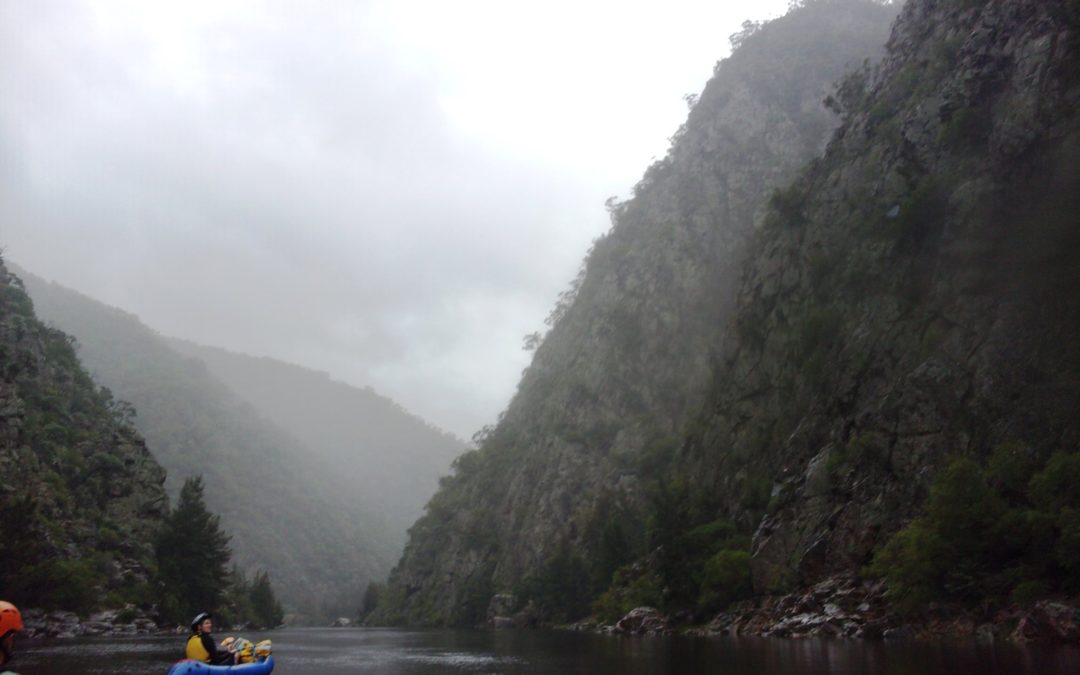 Packrafting is a great alternative when there has been too much rain for safe canyoning. We chose to do the 16km stretch of the Shoalhaven between Great Horseshoe Bend and Bungonia Creek because we did not have time to do the classic Colo Gorge trip, which really needs two days, and we were after ‘bushwalking on water’ rather than adrenalin-filled whitewater, which can be found closer to Sydney. This section contains the justly famous Blockup Gorge and some fun Grade II rapids. There is supposed to be a Grade III rapid, but neither this trip, with the water at 1.24 nor the last time we were through here with the water at 1.50, did we encounter anything that could be called Grade III. It must exist only when the water is very low.

We met up at Bungonia village at 09.30 and did a car shuffle between Bungonia NP and Great Horseshoe Bend (Bullion Hill). This takes about 45m and with the firetrail to Bullion Hill in its present condition it is definitely 4WD only. It’s only about 2km down to the river, but over 300m vertical descent and takes about 30m. We walked down in light drizzle and by 12.15 we had the rafts inflated and were on the river. The next couple of hours were a series of nice Grade I and II rapids, all interesting different from when some of us had run them with an additional 30cm of water last year. Places where we had previously had a series of large standing waves were now just Grade I riffles. The rapids through boulders, however, were different but not necessarily any easier than when there was more water.

Around 2.00 we passed the cliff with extraordinary folded strata that marks the approach to Blockup Gorge and stopped on some rocks for lunch. Detecting that it was lunchtime the gods sent a heavy shower, but in a wetsuits we could laugh at the rain. Then we ran a couple of rapids and began the slow drift through the gorge, taking our time to admire the cliffs, canyons and drifting clouds of mist. The exit of Spring Creek Canyon was particularly spectacular, with a big waterfall coming down.

Exiting the Gorge we passed the chimneys of the old copper mine at Tolwong, and encountered several easy but enjoyable rapids before arriving at Bungonia Creek around 5.00. We walked up the white track, which is pretty steep and seemed to go on for ever in the continuing rain, and arrived back at the cars by 6.30. Changing into drier clothes (wish I had brought a second pair of socks!) we collected the other car and headed back to Sydney. Altogether a fantastic way to spend a rainy day, and it is just a pity more people don’t have packrafts L