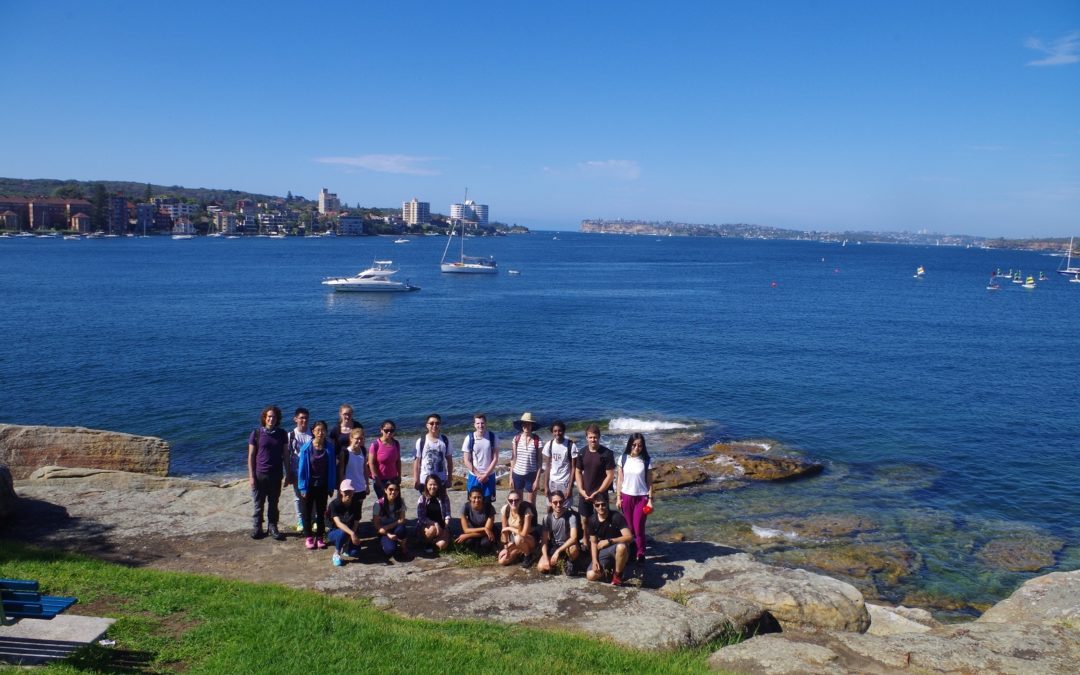 AS you can see, bigger than Ben Hur, showing that there is a strong demand at present for day walks. Most of us met up at Circular Quay for the Manly Ferry, trying to keep together which is not easy given a ferry holds 1100 passengers. At Manly, Manon and Rebecca (who live locally) were waiting for us, but Cathy thought she had got off behind us instead of actually being ahead, and took off up The Corso trying to find us. A phone call brought her back.

Then we set off along the Manly-The Spit walk via Fairlight where there were plenty of people walking their “fashion” dogs (Afghans, poodles etc), plus a couple of regular dogs. After Fairlight though, we left the dog-walkers behind as we started on the rack proper, although having to detour via the footbridge over North Harbour as the tide was too high to enable us the cross the sand flats. Then we did some rock-hoping along the shore until reaching the track to Dobroyd Head which rises via sets of stone steps. I found the side track to Crater Cove and we turned off along it. This track is fairly rough and requires a bit of rock hopping here as well. Eventually we arrived at Crater Cove with its Depression-Era shacks. Immediately I was aware of the absence of Dragons which was surprising as usually there are quite a few here. Here we had morning tea before returning back to the main Manly-Spit track. One small Dragon was spotted on the way back. At the main track a Blue-Tongue Lizard crossed thew track in front of us but was too quick to be photographed.

The track from here on for a kilometre or two passes through dense high scrub (similar to what the French call “Maquis”) which blocks sea breezes and causes the track to become stiflingly hot. So We did not stop anywhere along it until reaching the lightly forested area near Castle Rock Beach. Having experienced the crowds at the main Castle Rock Beach last year, and not wanting to repeat it, I moved the group on to a small beach a few hundred metres further west, where there we nice rocks to sit on and much fewer people. He we had lunch. I took the opportunity to teach people some new words such as “chook” and “dunny”, and Joshua and Jake told how in Texas, despite citizens being allowed to open-carry automatic rifles into their local Walmart (the U.S. equivalent of Big W or K Mart), they are not allowed to open-carry sex toys! So, students at on Texan Uni organised a protest by open-carrying dildos!

After lunch we continued on the Clontarf where we had a brief water & loo break. This is where the riddle of why I subtitled the walk “Kaiser’s uncle shot” is answered. The reason is that another person also did this bushwalk today (12th March), although 149 years earlier in 1868. His name was Prince Alfred, Duke of Saxe-Coburg and Gotha, and was Queen Victoria’s second son. That made him the uncle of Kaiser Wilhelm II, King George V, and a heap of other European royals, given that Queen Vic had 9 children. Unfortunately for Prince Alfred, an Irishman took a potshot at him here, wounding him. The full story is here: http://dictionaryofsydney.org/entry/assassination_attempt_on_prince_alfred_1868

Royal Prince Alfred Hospital in Camperdown was built to commemorate his safe recovery, and it was one of the clues I gave to help solve the riddle.

Joshua and Jake re-enacted the attempted assassination on what appears, judging by the drawing in the above link, to have been the exact spot where it happened. There is supposed to be a plaque on or near the trees in the park marking the occasion, but most of the trees there have wooden skirts on them, but there by Manly Council to deter vandalism, so it might be covered up at present.

After Clontarf we continued to the old tram terminus on the north side of The Spit, where Manon and Rebecca left us to catch buses back to Manly. Meanwhile, we waited 15 minutes at Spit Bridge while it was opened to allow boats to pass under it. Then at the south side of The Spit, Usama and Charles left us to get a bus back to the City as they had homework to do. That left us with 16 people to continue to Balmoral. Fortunately the tide was out far enough for us to walk along the shoreline from The Spit to Chinaman’s Beach instead of a road bash along Parriwi Road. Even so, care has to be taken as some rock-hopping on rocks with razor-sharp shells has to be negotiated. So eventually we reached Chinaman’s Beach, and then a road bash to the north end of Balmoral Beach. We were envious of the affluent mansions we saw along the way. At Balmoral we walked along the promenade to the south end, with water bottles being refilled for the remainder of this long walk. Eugenia left us here to walk back home to Mosman. We had a discussion about whether anyone wanted to have a swim her, but nobody really wanted to, so we decided to press on. So the remaining 15 set off to Taronga Zoo Wharf. We started off through the old Balmoral Tramline cutting, a remnant of Sydney’s once large tram system, and I taught everyone two new Australian words: Galah and Drongo. “Galah and Drongo” aptly describe the NSW politicians who closed down Sydney’s original tram system, but I digress.

This cutting is part of Laurie Plunkett Reserve, which eventually takes us to Gordon Street. Then there is another road bash to the former Army barracks at Middle Head which provides a short cut to Georges Head. Along the way we passed a large metal pylon with the ominous instruction: “do not approach in thunderstorms”.

Then from Georges Head we walked through bushland to Chowder Bay, and then to Bradley’s Head. As we only had 18 minutes to the next ferry from Taronga Wharf, and Bradley’s Head was 20 minutes walking from the wharf, I decided it was more sensible to have a break here at the HMAS Sydney memorial than try to run for the ferry. Given that we had already walked 20 km, our legs might have protested to running anyway. The following ferry was only 20 minutes later anyway.

At the Memorial, I received an emphatic lesson in the consequences of other people feeding wild birds at these sort of spots. I had a peanut butter sandwich in my hand and near my mouth, when I felt a bird swoop extremely close to me and felt a tug on my hand. At first I thought I was being swooped on by a Magpie, but then I noticed that my sandwich had a beak-shaped bite out of it, and there was a Kookaburra in a nearby tree feeding its chick with the bit of my sandwich it had stolen! (It’s chick by the way was almost as big as its parent). We also saw a couple of Bush Turkeys here.

After a rest at Bradley’s Head we set off for the final leg of the walk to Taronga Wharf, and along the way we could hear the Seals in the Zoo calling out. So we did our final ferry trip back to Circular Quay (and Alfred Street, named after guess who), and we parted our ways.

This was an enjoyable walk with good weather. We were lucky with that, being the first sunny dry weekend for a few weeks. It was a long walk, 21 km including the side trip to Crater Cove, but worth it. The only concern was that we saw so few Dragons, mostly juveniles. I wonder why.