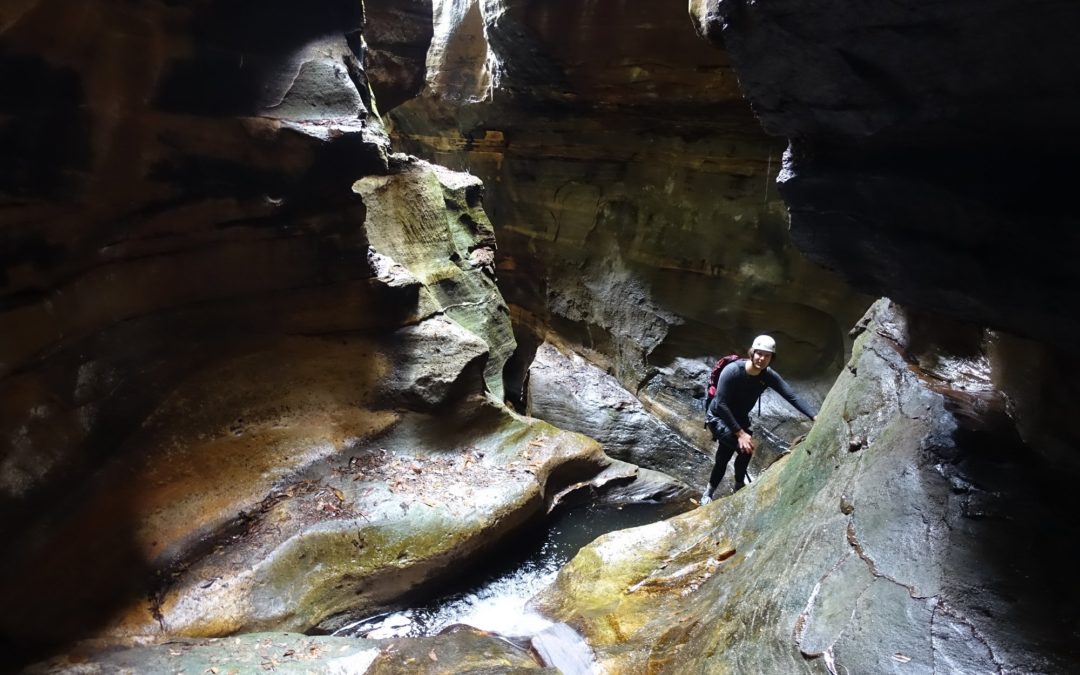 The drive to the mountains was mixed: three people pulled out and the good coffee place in Richmond definitely isn’t open on Sundays anymore, but on the upside it wasn’t raining for the first time in two weeks. We left the Mt Wilson fire shed around 9am, finding the ‘gambe running swiftly but not perceptibly any higher than any other time we could remember. We climbed the ridge on the other side and dropped to the left when the footpad disappeared, meeting the little creek that carves out Geronimo about ten metres from the first abseil.

Geronimo has a friendly feel to it, consistent but not dark, and with many short abseils. One possibly two-part drop made us pause a little as we weren’t sure if the pull-down would work or if we should have the last person sling a tree on a lower ledge, but the right angle was found, and we congratulated ourselves on our laziness. Then we came upon the famous ‘Geronimo!’ drop, which had a confetti of slings all directing you into a stupid looking hole, and the first two down said it was shallow and shouldn’t be jumped by normal human beings. But Kosta is not normal, and having watched me bob up and down for a while checking the depth a bit further out, professed “I’ve always made it to where I’ve imagined I would”, nailed the jump, and made the rest of us feel very sad for missing out. The canyon soon ended, and we were in the also pleasant upper Wollangambe.

Horseshoe was next, and entailed climbing up the same ridge and dropping off the other side. We didn’t know much about it other than that the canyon was short and the headwaters scrubby. In hindsight, where we left the ridge was probably about right, but we got forced upstream a few hundred metres looking for a cliff short enough for our ropes, which Joel quickly outdid by finding a walk-down a few hundred metres further up again. This meant 15-20 minutes of not so pleasant scrub until a nice cave and the start of the canyon. This canyon is very, very short but also very, very nice – with two nice waterfall abseils in deep constriction. If anyone is planning on going through anytime soon, one of the mallions on the two-bolt abseil could do with replacing, and the old rusty ones removed. Kosta donated one and old and new are pretty much equalized, but we didn’t have a second nor a spanner on-hand to clean it up.

The canyon ends abruptly right at the river, where we stripped down for the walk up. Ron bemoaned his sewn-up $6 board shorts once again coming apart, which was funny enough until I somehow lost my shorts entirely in the river. Having located them some distance downstream using a thorough knowledge of fluid dynamics, and also luck, we slogged up-hill to the cars, where we met Helen and adjourned to the pub at Kurrajong Heights.