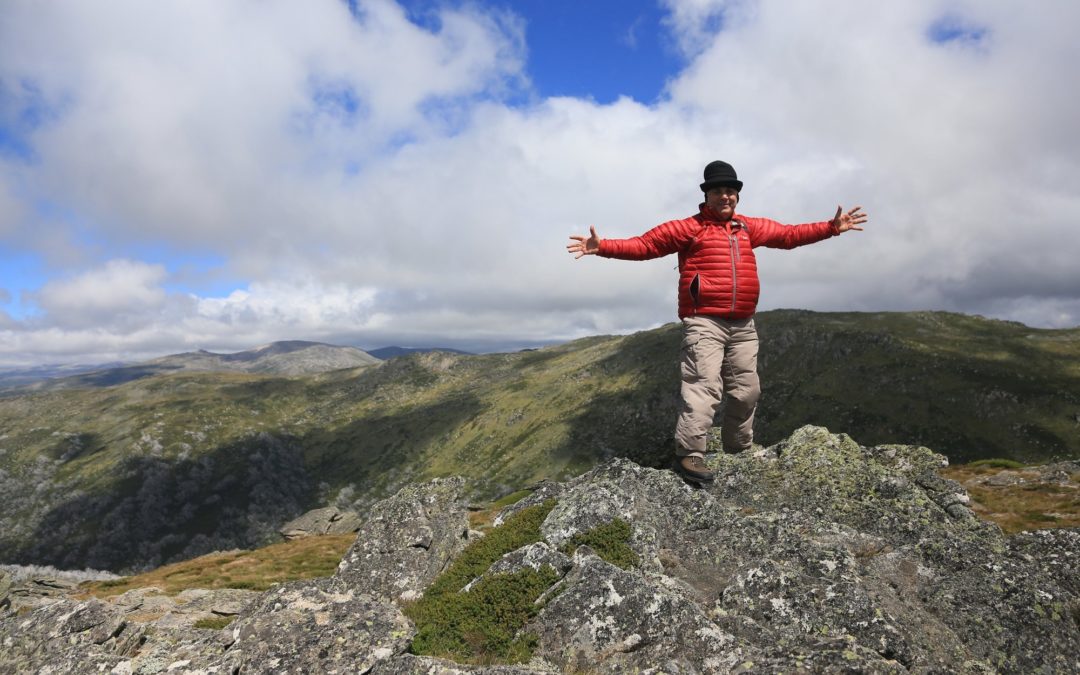 Summer in the Australian Alps is a mixed affair. It can be very hot, cold, or wet . Big biting March flies can drive you insane and thunderstorms frequently develop on the peaks on hot days. Over time, I’ve become a little wary of doing trips to the Alps and expecting everything to go as planned. But if you are flexible, then you can make it work better for you. This weekend was just like that.

On Friday night Derek and I went down to Cooma and stayed the night to get a jump start on the big weekend ahead. The weather forecast was all over the place. Sydney was to get some very violent storms but down south a vigorous cold  southerly change was forecast. There was even a chance of snow!

I had planned to climb Mt Tate (2068m ) on the Main Range. But I decided to do that on Sunday, given a forecast of unsettled weather on Saturday. Instead, a mountain I have longed to climb for years, Pine Mountain, in Victoria, became the goal, given the better weather prospects there. It’s not a very well known mountain but is claimed to be a granite monolith 1.5 times bigger than Uluru! It was a lovely drive from Cooma over the ranges via Elliott Way and Tooma, to the Burrowa Pine Mountain National Park just over the border in Victoria. A rough road to the track head got us started at 1pm. The trail led up through wonderful groves of mature Cypress Pines (Callitris Rhomboidea). Gradually the trail became rougher and more interesting among the giant rocks.  It was warm going but never too hot.  Some scrambling up rock slabs got us up to what seemed at first to be the summit which revealed fantastic views of the Main Range of The Snowy Mountains, Murray River Valley and Mt Burrowa.

We discovered we were were not quite on the true summit which was actually a few more km to the east, but only 100m higher. So we decided that it was not worth going that far, considering our views were so good, and the return would get us back to the car at 5pm. That way we could get to Corryong for a nice pub meal! We enjoyed relaxing on the giant slabs and taking in the serenity of a mountain with no one but us.

The steak and craft beer at the pub finished a most enjoyable day . We then headed off into the night to Tom Groggin campsite via the twisting Alpine Way. But it was more like a zoo! Wombats, wallabies, possums, foxes and feral reindeer with antlers at every turn! No speeding down this road!

We set up tents at the popular but peaceful campsite near the Murray River and got ready for day 2.

An early start saw us head up to Guthega to have a go at climbing Mt Tate. I haven’t climbed it before and wanted to find the track that goes up a ridge from Guthega dam. It wasn’t so hard to find at all and was a faint but well worn pad up to the high ground. Wildflowers and picturesque dead snow gums made for a lovely climb up. But at the top of the Guthega Trig (1870m)  we caught the full brunt of a 50-60kmh wind. It became much harder walking forward into it as we headed for Consett Stephen Pass. We decided that maybe Tate could wait for another day, as the return would take more hours that we had actually planned for given the freezing wind. Instead we went up an unnamed summit just north of us. It was 1970m high, only 80m lower than Tate so the views were still great. We could get out of the wind that way.  With an ambient temperature of only 4C (in February!) the wind chill made it feel like minus 4C! We wore our gloves and jackets to stay warm. I did not expect this in late summer!  Out of the wind, we had lunch and it was so nice there it was hard to want to leave and face that tempest again.

Eventually we did though, and slowly made our way down the 400m descent back to Guthega and then reluctantly headed home.

Thanks to Derek for his good company. A few others had signed up, but some gear issues and other commitments meant they couldn’t join this trip. But I’ll be coming back for sure so I hope they can make it next time, to visit this beautiful alpine area.