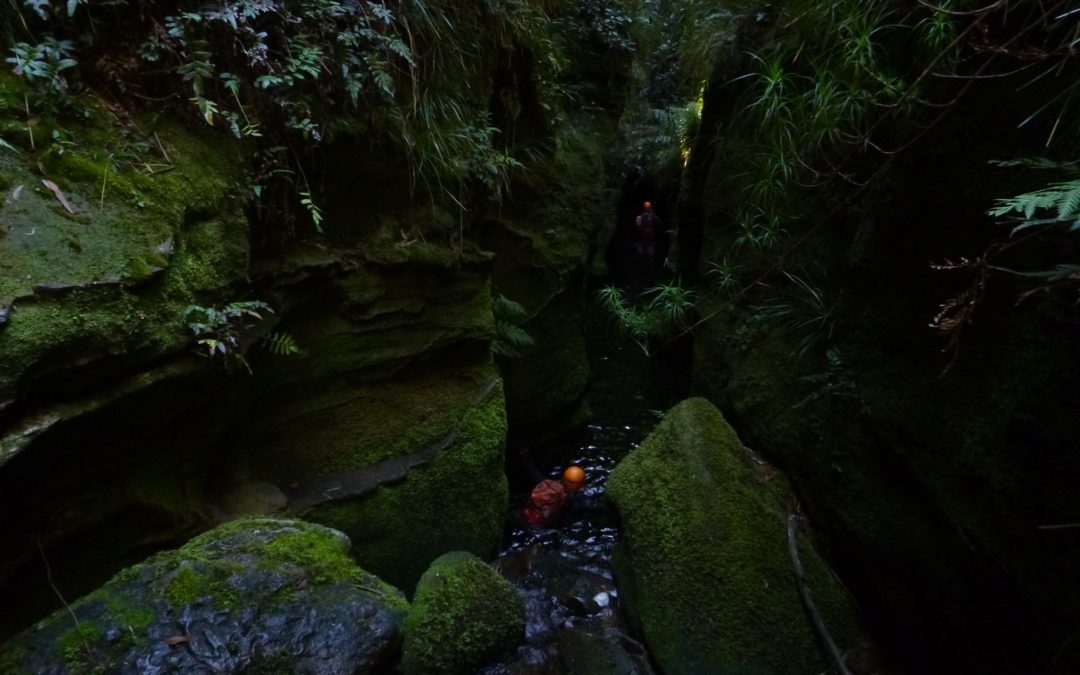 With the hot temperatures forecast throughout the weekend I decided on Friday afternoon a nice cool canyon trip would be in order to escape the heat. Since Saturday would be reaching temperatures up to 44 degrees in places I decided that Sunday would be the better option at 34 degrees.

We all met at the Blackheath car park before car pooling into Pawel’s and Scott’s cars and parked at the usuall car space spot for Hat Hill. With gear sorted we then proceeded on the well defined track that continued all the way into Hat Hill creek. We waited for Tim & Scott half way down the ridge as they had gone a bit too far to the right on the way down but did find a nice gully that could be worth checking out on a future trip with an interesting abseil at the end.

Considering the warm temperatures in the mid 30’s there were various wetsuits and no wetsuits being used throughout the day. I opted to use my 2mm aldi spring suit, William, Tim, Pawel, Savannah opted for a full length steamer. Whilst Scott didn’t use one as the swims would be relatively short.

Once we donned our gear we headed downstream at a leisurely pace and before too long we were at the first of a serious down climbs throughout the canyon. Some of the down climbs went into pools of water that were chest deep at the most, whilst others involved carefully balancing yourself trying to negotiate boulder fields down climb sliding on your rear in places when it got a bit too slippery.

There is no evidence at all from the days of when the Blackheath Sewage Treatment Plant was releasing treated effluent into the creek and the canyon is just as green and mossy as the Green Room at the end of Whungee Wheengee.

We had lunch at Hat Hill Falls before reversing the canyon to the large exit gully going in a north east direction with a mostly distinct track to follow back up onto bald head ridge that eventually goes to over Hat Hill back to the fire trail. Then it’s just a few kilometers back to the cars.

Hat Hill is a good canyon to introduce beginners too who have never been in a canyon before. There are no abseils just a lot of creek walking, some short swims and some down climbs where a bit of care is required but there are hand and foot holds at each one.