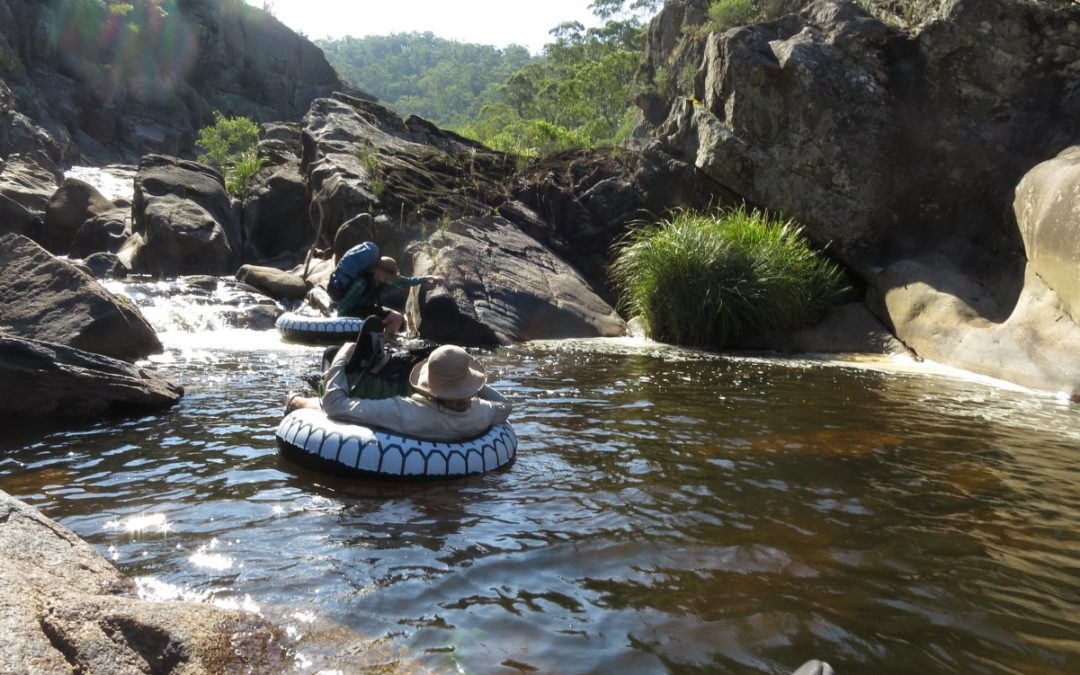 We met in Blackheath at a respectable Thursday morning hour and piled into the one car for the drive to Kanangra-Boyd NP. Despite the top temps forecast of 26 degrees, simply walking in the sun was enough to make this temp pale in comparison, and before long we were sweating on the hour walk down to the Kowmung. We ate lunch at the first swimmable spot not long after hitting the Kowmung… and swam!

We then made good time bouldering hopping and scrubbing our way down to near the junction of Tuglow Hole Creek, where we blew up our tyres which I’d managed to score from clark rubber on Wednesday aftenroon for the start of the floating. Between deep sections we had to carry the tyres but for the most part this wasn’t a problem. Night one was spent close to Morong Falls (dubbed “morong trickle” as there wasn’t that much water coming down), replete with jumping jack ants, bullants and a couple of ticks to boot!

Friday morning was misty and cool, but it wasn’t long walking before we were feeling the radiant heat and the water beckoned. We took a little while negotiating the two larger drops of morong deep, and when coupled with a good stints of wild blackberry eating, we had barely moved 2km before lunchtime was upon us. The heat took its toll as we floated and carried out tyres down the river, slower and slower, negotiating thicker scrubby sections and smaller boulders. Finally we decided that the inflated tyres were more a hindrance than a help, and we deflated them and stuck to walking. By 5pm we realised we were probably too far to make Howling Dingo Camp, and we felt dejected returning to an earlier beach campsite.

We had a quick discussion about the merits of another day of walking or floating down the river in possible rain and thunderstorms, and decided we would brave a path up Booral Ladder and out a day early instead. We broke camp early on Saturday, when the cool breeze was still blowing, and scooted up Booral Ladder in less than two hours, continuing on to have lunch at another waterfall on the plateau.

The final walk back to the car was hot but we didn’t swim in the end, instead taking up prime position at the Kanangra Walls lookout around 5:30pm. Just before dinner time, close to sunset, on a weekend, almost a long weekend, at the number one lookout in Kanangra-Boyd NP, a number of us got brow beaten as a film crew tried filming the last scene of their film…

Sunday we had a leisurely trip back down the big hill after breakfast #2 at altitude cafe, avoiding any major traffic snarls.

A great weekend filled with fun and food, thanks to the participants.