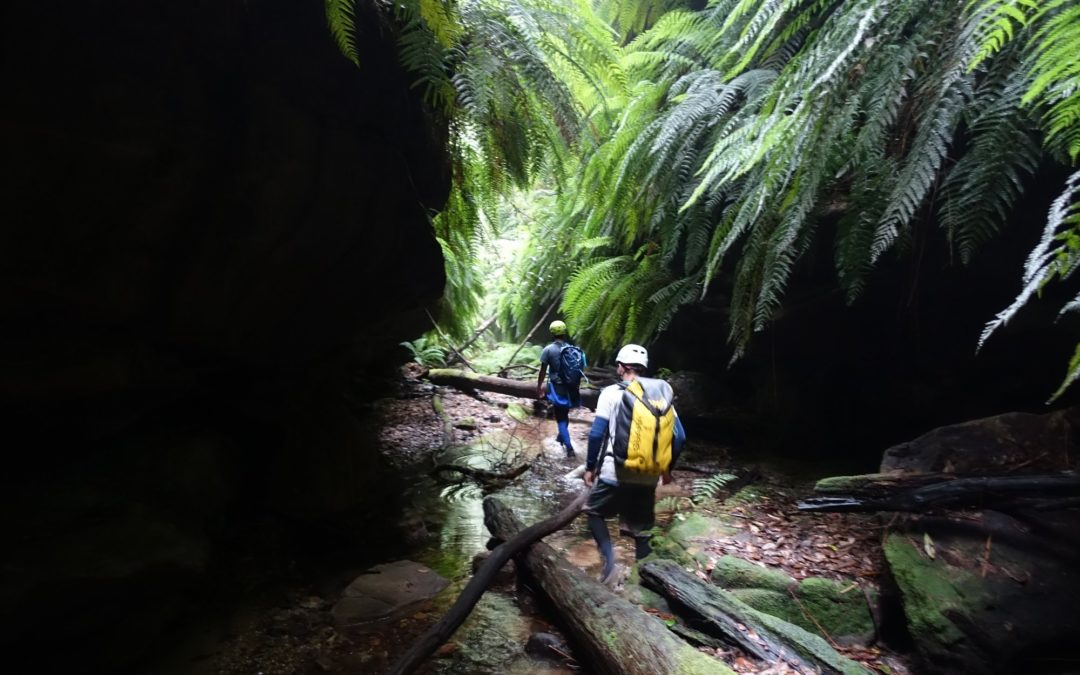 Nobody had slept in or ended their safety spiel by begging for food, so we felt unusually professional as we locked the cars at a respectable hour and bundled down the footpad into Mistake Ravine.

Mistake and then the upper parts of Ranon are flat with high ferny walls – one of the more pleasant canyons in the mountains. There were a few hand-over-hands and we abseiled twice, both off chockstones with low but fair starts.

On my last trip into the canyon we’d abseiled straight down the canyon wall at the Claustral junction and I was eager to try the route down the waterfalls in the creek. Damon rapped into a tunnel to look around for an existing anchor to suggest we might be on-track, which he eventually found swinging around his head in the dark. The waterfall abseils are cool – on-par with the direct drop – four consecutive waterfalls split across two abseils, so you get to swim a pool on-rope each time. That first anchor swinging around in the dark is glorious – even has a rap ring – although the second we went off tape extending from the mallion to neaten the pull down.

Carpark to Claustral junction was about three hours, then another six back to the cars. We met another party of two coming out of Claustral and the log book had them as the only other party signed in that day. The fixed line has disappeared from the second step after the propped up logs above Rainbow Ravine, so until/if it’s replaced it’s probably quicker to use that mysterious ‘guides track’ avoiding those scrambles.

Hope everyone had a great weekend!