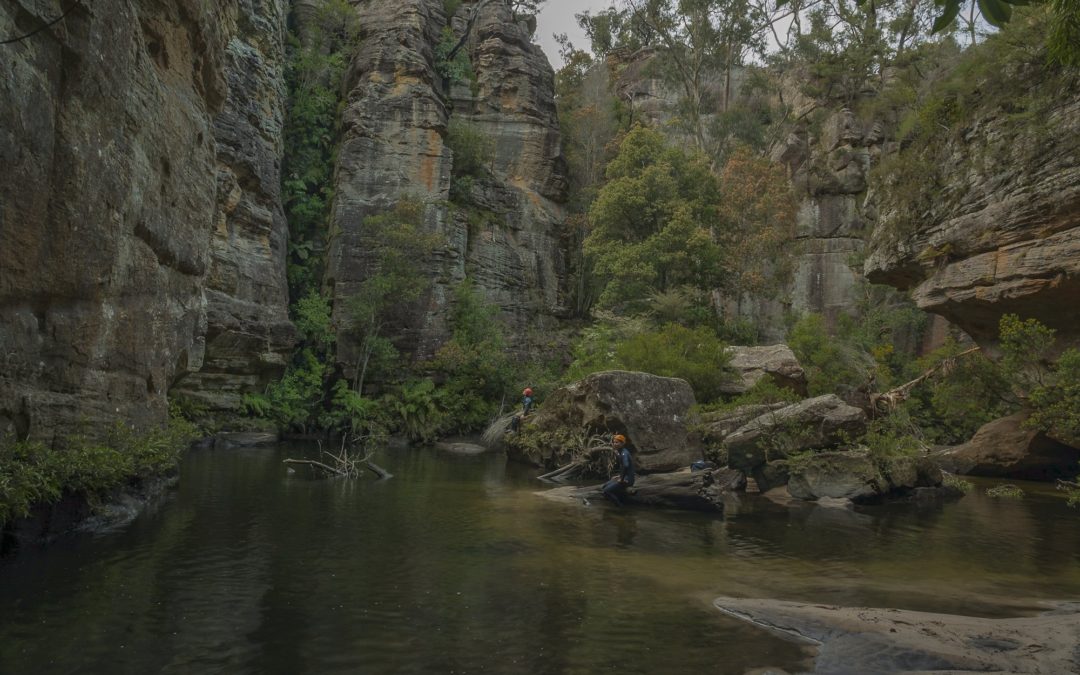 This was the inaugural Wollongambe1 trip for myself and Robert, and we were really blessed with the most awesome day.

Tony and Robert had enjoyed camping over at Cathedral of Ferns Reserve after having done Geronimo the day after so their bright eyed enthusiasm was almost harmful to my bleary eyes.

This is Tony’s most favourite summer trip, and he claims he would love to live here.

We set off down the touristy fire trail- my 6th? Trip along this fire trail in the past fortnight. It was quite humid so we were eager to reach the river.

‘Some’ rain was forecast for early afternoon.

I was the only one with a lilo for the day and was very glad I had one there is an amazing amount of swimming, not recommended when you have a dicky shoulder! I would highly recommend a tiny pair of flippers being more useful than an actual lilo – you can use your bag as a flotation device and carrying around an inflated lilo soon becomes a pain in the butt, even though mine was a kids length sturdy surfmat I still nearly punctured it and it was quite cumbersome to carry when negotiating boulders and overgrown creek bed bits.

The water was a bit clearer than a day ago when we had crossed the river, heading for Geronimo canyon.

On 25th, 2 days before, the region had had hail storm and some down pour rain.

Anyway it was an awesome day.

After a mere 100 metres or so we were left aghast at the beauty of a stunning cove with tiny beach and impressive fern filled slot opposite. There were several small coves on bends where you could stop for lunch or a well earned rest.

Robert, who is originally from Germany and has been living in Australia for 5 years and swimming almost everyday around Bronte Beach area, kept saying “fantastic”.

The water was far from cold and not much current – some current would be nice to help travel the swimming sections but then you get to numerous small rapid sections and it’s quite amazing how little water movement it takes to displace your feet – shin bruises were in order for the day.

There are a few quite long swims through impressive constriction like areas with high walls clearly battered by erosion. Nowhere to stop in these for photos alas and by the time we reached the main area for these a short thunderstorm had arrived and brought with it torrential rain. As our eyes are almost at the same level with the river surface, i wished my camera is a waterproof one to capture rain drops rebounced upwards. Also, there were many amazing temporary short life water falls, which had formed from the top of the very high rocky cliffs.

We did a quick stop at the junction where Water Dragon canyon exits into the Wollongambe there’s a large overhang here and a great view.

Our last stop was the exit point – we didn’t take the usual spot, instead not far past there was a rock platform about 5 metres up which provides plenty of dry space to get changed and an easier yet still steep climb out. It is very closed to Serendipity’s exit. Due to my possible thump gripping and hip problems, plus the most recent rain and my heavy backpack, Tony had decided that the normal exit with the 7meter vertical rocky climb up was not a good choice.

A water dragon seemed particularly curious and friendly, inching closer and closer as I took closer and closer photos but as it turned out he was trying to shoo us off his favourite rock – once I moved all my gear he promptly moved into the centre and flattened himself out against the rocks surface to soak up its’ warmth.

It remained overcast on our way back, much to our relief as the walk back always seems so much longer.

Thanks to Tony for leading the trip.