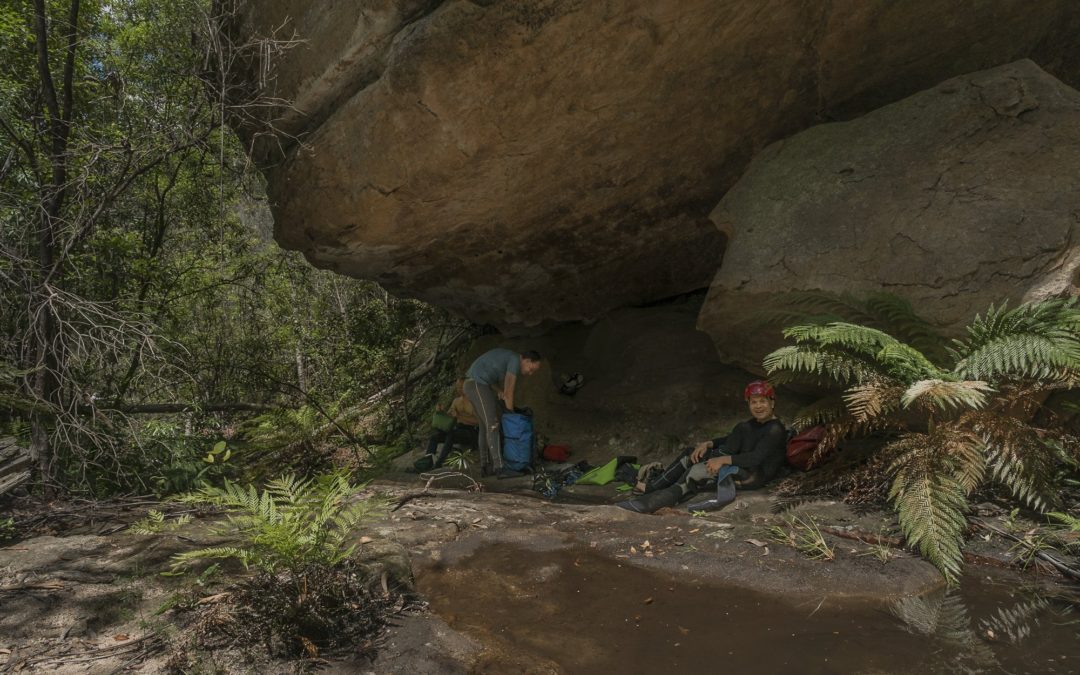 We could not have been blessed with better water for this trip – mild temperatures easy to cope with during the sections of walking, great little puffy clouds for photography, blue skies, from start to finish it was just superb. It was a rare day too when the clarity of the skies was awesome – no smog! I couldn’t wait to get some photos.

Tony and Robert enjoyed a sleep in having camped the prior evening at Cathedral of Ferns reserve whilst Andrew and I tempted fate with the hidden cop cars en route from Sydney.

The start point is the Fire Station – we were the only idiots awake I think, most folks were likely still digesting Christmas lunch – after what I ate that day a walk was needed!

Setting off along the usual long trek of the firetrail we were again blessed with hundreds of butterflies – the area of late has a major proliferation of them, they are mostly the Varied Sword Grass Butterfly.

The 2.3km trek stops at the Wollongambe River where a small beach exists, usually used for changing in and out of wetsuits – our trek continued across the river and up what was actually a fairly obvious path through scrubby bush to the top of the ridge. The top of this ridge is one of the more bald open areas with fairly low level and spaced shrubs, small trees and the most amazing views 360 degrees. The pagodas in the area were amazing with many bizarre shaped holes in them and other interesting shapes and formations.

We figured we were standing on the ridge overlooking the canyons upper reaches and Tony and Andrew were discussing whether or not we’d gone a bit high up when Andrew found a few cairns. We bush-bashed down to a 2m drop which appeared to have been abseiled before as it was awkward, evident by some feint rope marks around trees – I managed to find an easy walk around it and down, some earlier footprints reassuring us we weren’t the only people prior to have entered at this spot.

Once at the creek, just follow the creek – pretty simple- a bit of a scramble here and there and then we came to a deep overhang just near the first abseil. This was a pretty spot – time for a pic and donning the wetsuits.

The second abseil was awesome – extremely slippery and a little awkward but it was into a superb constriction bit with a deep pool which at the time was brightly lit with golden sunlight. The pool had loads of yabbies in it.

Whilst the canyon is not a very long one it is quite rewarding with 2 decent length typical tight constriction bits filled with greenery and ferns. The water wasn’t too cold, and overall the trekking along the creek and surrounds was pretty easy going. There’s a really nice open cavern like section midway with the most dead straight wall I’ve ever seen – I didn’t see a single handhold it was as if somebody has sliced it with a knife.

The last section of the trek is of course back up the Wollongambe past the opening to Bell Creek and on and on, walking the river itself. We saw some monster sized yabbies and oodles of babies. Back near the exit point there were numerous dragonflies.

Nature was very kind – the temperature hadn’t changed and sat at around 22/ for our long walk back to the cars.

This is an easy canyon worth a visit but I think given the trickiness of the start of each abseil you’d want to have built up some confidence in handling yourself on ropes before attempting it.