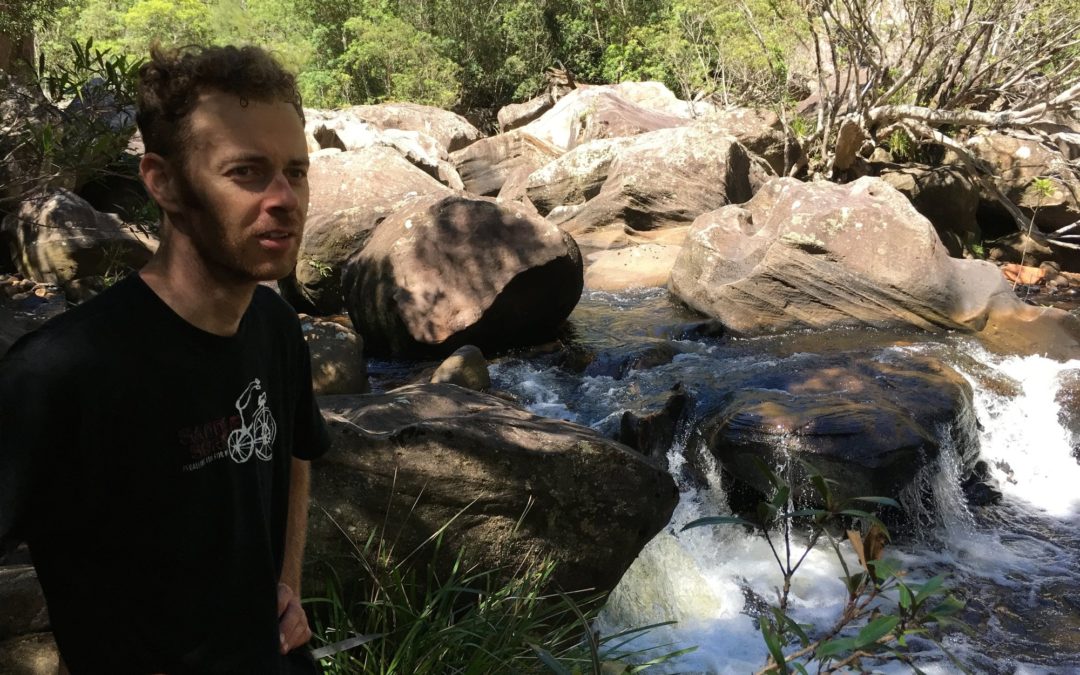 The aim of the trip was to see how far we could get down the Grose River in three days. The short version is: not as far as we hoped.

We started out well. Catching the 07.23 train, we used Katoomba cabs to save the 8k hike out to Perrys Lookdown, the shortest route to the Bluegum Forest. We started at 10.00 and by 11.00 we were 500m lower and following the Grose River through the giant gums. The Bluegum forest is one of the most visited sites in the mountains with four well-made and signposted walking tracks coming in from different directions.  So it’s quite surprising that turning east down the river there is no track of any kind. On the way back we found a sensible route along the right bank marked with surveyors tape for a couple of kilometers, but apart from that we saw only occasional footpads left by Willy Wombat and Wendy Wallaby.

We soon made the first of our two big, time-wasting errors. Arriving at a fallen tree across the river and seeing a nice stretch of grass on the left bank we crossed over, only to find that the flats on the left bank are one enormous thicket of lawyer vine.  Pushing through vine scrub is like playing twister in barbed wire while someone pokes you with a stick. For those who have not had the pleasure I have included a photo of vine scrub and of one of it’s thorn-covered stems. Worse still, the river at this point was a deep pool with a muddy bottom. We scrabbled along the bank for a couple of hundred metres hoping the pool would end before giving up and getting wet and muddy. An hour wasted for less than 500m progress!

The north-facing right bank is steep and dry and it was standard bush-bashing for the rest of the day.  In this first section the valley is a couple of kilometres wide, with the cliffs of Explorers Walls and Mt Hay Walls towering on either side. We pushed up the slope a couple of times to avoid the heavy scrub along the bank, but although the vegetation is very different it’s still very thick. There is a lot of sapling growth and the best you can hope for is a wombat track to reduce trip-hazards while you push through saplings at head height. Leather gloves are very handy. Around 6.00 we found a small beach in the middle of gorgeous section of giant boulders and stopped for the day having covered about 8km in eight hours. Our campsite had two natural spa baths and we made the most of the long summer evening, with the sun going down at 8.00 and twilight until 8.30.

It was a very old-school camp.  The weather was glorious, so only Dean put up a tent. I had a bivvy, but Nathan went one stage further with just a ground sheet half under and half over his sleeping bag – minimal indeed. Nathan and Dean both had alcohol stoves made from old tins using instructions on the internet. Both designs worked a treat and they are ultra-light.

We woke on the warm morning of what promised to be a very hot day (we measured 29C in the shade at lunchtime). The cool river was going to be an essential survival aid on a day like this. We had a look at the map and decided we would not make it to the Faulconbridge ridge track in time to walk out and get a train home on Wednesday night. At best we could hope to be at the bottom of the track late on Wednesday.  So given deadlines back in Sydney we decided to explore a bit further up the valley and then head back to Blackheath. From this point the cliffs close in and start to get lower, and the river itself runs in a very tight gorge. There is no real alternative to following the bank, which is sometimes cleared by floods but often pretty thick with vegetation, or rock-hopping when the river is choked with boulders. We walked upstream until morning tea, enjoying the spectacular boulder chokes and innumerable little waterfalls. During the break we met a few tiger leeches, although overall the trip was remarkably leech-free. Then we headed back to our first campsite for lunch. It was very hot, so we had a good swim and lay in the shade before deciding it was time to head back up the river.

As the valley opened up again we made the second of our two big, time-wasting errors. We headed up the slope, looking for more open bush. We did the usual thing and climbed around the head of a few gullies, until we realized that each gully was getting higher and we had now climbed about 100 vertical metres above the river. We were also heading at about 45% to the direction we wanted to travel. So we dropped into a still larger gully, one coming right down through the Mt Hay Walls, and rock-hopped and scrambled back to the river. A couple of hours lost and about 500m further up the river than when we first headed up the slope!

It had been ferociously hot on the hillside, so we had another swim and lay in the water for a good while to cool down before pushing on. Around 7.00, we found a nice flat area where another big creek joins the river, just west of Mt Hay.  Here we set up camp and enjoyed another session in the natural spas. Frankly, we had not moved much further towards our destination, but we had passed a lovely day scrambling around a beautiful wilderness river, so we were fine with that. It was clouding over and looking potentially thundery, so even Nathan put up a tent, although it was so warm that with the extra insulation from the tent there was no need for a sleeping bag until the early hours of next morning.

Next day began pleasantly cool – a change had come through – and we pushed on to the Bluegum forest, arriving about 11.30. We walked through the Acacia Flats campsite, where we found the most disgusting – and enormous – pile of rubbish. Lots of instant meal containers, wrappers of all kinds, and even an empty 20 litre box of spring water.  Welcome back to ‘civilisation’! The fact that the rubbish was piled next to the long-drop suggests people think that National Parks will come and clean up after them.

Hurrying on we stopped for a lunch and a swim at Junction Rock, where we met some daywalkers. It had warmed up again and we sat in the shade watching the big eels foraging in the pond – we even saw one snap up a tadpole. Sadly, the bushes all around Junction Rock bear witness to the loss of cultural knowledge of how to dig a hole and the growing popularity of the undegradeable wet-wipe. The return to well-marked tracks was proving a bit depressing. But then we headed up the cool and shady Govett’s Creek track, and the beauty of this walk, with the bright sunshine barely filtering through the trees and the succession of little waterfall plunge pools, lifted our spirits. We stood for several minutes looking at one shady pool with a stream of frothing white water cascading down, a big orange yabby searching the bottom, a little dragon perched on a rock, and the most astonishingly electric-blue dragonfly perched just above him. As Nathan remarked, if you saw a photo you would think it was all arranged.

Back at the top of the cliff it was a quick 3km back to the station and just time to visit the chip shop before getting the train home. Our ‘learnings’, as they say these days, were twofold: there is a long stretch of stunning wilderness river delightfully close to Sydney, and if you want to get to Faulconbridge stay on the right bank and don’t bother looking for a better route higher up!