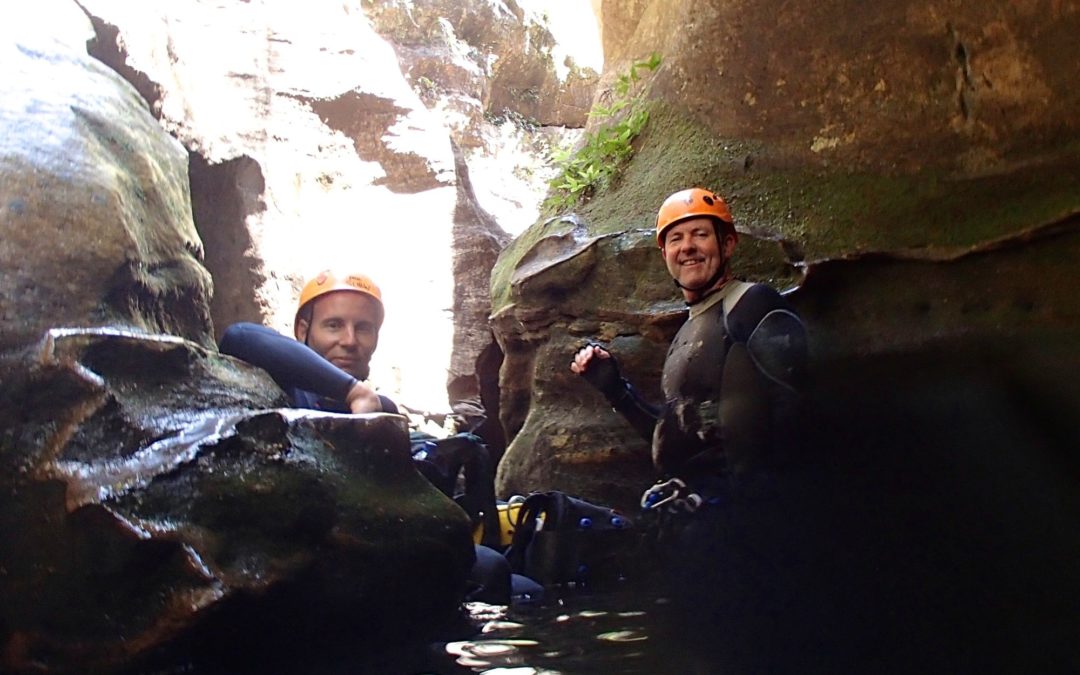 An absolutely straightforward trip through Fortress. We met for breakfast in Leura at a leisurely 9.30 and hit the trail about 10.45. The weather was perfect – low 20s and bright sunshine, and the water in the creek was a decent temperature. There is a clear track, as described in Tom Brennan’s notes, all the way to the creek, which took about an hour, where we donned wetsuits and harnesses.

After a short section of creek-walking we reached a small constriction and had our first wade, which was a welcome relief from the heat. More creek walking alternating with wades and a couple of short swims followed. There were two water jumps, the first quite tricky as the pool below is shallow, and the second a fun one. Eventually we reached the main constriction, which has some substantial swims and wades, and then the only abseil. Another group were just finishing the abseil, so they did not hold us up for long. We were surprised to see an anchor on two rusty bolts in such a busy canyon with a lot of commercial traffic, as opposed to an insurance grade three-point stainless steel job, but it seemed perfectly sound. The abseil looks as if it has a tricky start, but is actually fine, and Sam passed her abseil baptism with no problem.

After the abseil there is a swim and then a scramble through some boulders to wher the canyon ends at the justly famous cliff-top and waterfall, which we reached a bit before 3.00. The views from the rock platform here are just magnificent, and we changed out of our wetsuits and had a leisurely lunch. The water in the little ‘spa pools’ here is much warmer, as if is exposed to full sun. Eventually we headed back up the canyon to the exit gully and strolled back to the car, stopping on the ridge a couple of times for photos and chit-chat, and finally arriving back at 5.00.

A quick farewell beer at the Alexandria Hotel followed, and then home. A lovely, low-key trip and made my weekend.