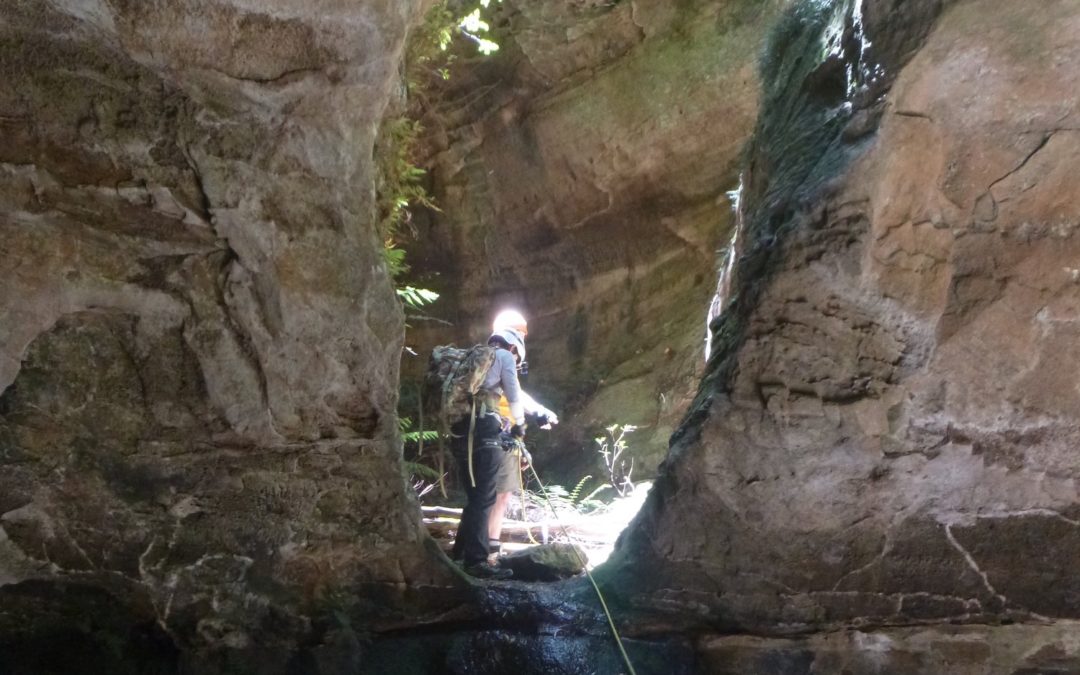 We all met just before 8am next to Medlow Bath train station. Meridy and I were the first to arrive followed by Jack, Izabela and Paul. Myself, Paul and Meridy desired our coffee fix before the trip so walked up to the café near the railway bridge to get some before the 5 of us piled into Meridys pathfinder and took off to our starting point parking near the electricity tower.

Jack and I carried my 40m & 60m ropes for the trip. We down climbed the first optional abseil and I setup the second abseil that has a bit of an awkward start towards the edge where there are two boulders wedged together to make a narrow overhang abseil or you can use the rocks either side to step your way down.

Our next abseil went down a trickling waterfall with a pool at the bottom. Some care is needed here to traverse onto the narrow rock ledges to your left near the bottom of the abseil to avoid getting wet in the pool below which is normally only waist deep.

For the next abseil we choose to go off the chains on the left instead of going off the sling down the slippery waterfall. Then we down climbed to our final abseil. Everyone opted to do the climatic 20m overhang abseil but since I had already done the overhang on a previous trip I wanted to do the abseil down the logs as I had never abseiled down that way before, so I gave them my 60m to use and I used the 40m.

From the bottom it wasn’t far for us to join the Rodriguez pass track where we stopped to have morning tea at the clearing where the track junction is and discuss our options for the rest of the day since we finished Jugglers early.

We weren’t the only ones doing Juggler that day after completing the canyon we heading back to the car and saw a white van which we then realized that Blue Mountains Adventure Company (BMAC) were also running a Juggler Canyon trip that same day. We spotted the same van park next to Katoomba pub where we were having a drink after our two canyon trips that is where we put two and two together.

After completing Jugglers Canyon Paul Griffiths entertained the idea of doing whores bed Canyon which none of us had done. Paul led our way through the canyon with him and Jack setting up the abseil lines and doing bottom belays. Here are our track notes for it.

A very faint track leads for about 100m across into the next gully over from Devil’s Hole, and to the first abseil, from a shoulder high anchor on a tree at 487651 Katoomba Map.

8m abseil overhung. Immediately followed by 4m abseil down a slick waterfall – cannot be scrambled. Anchor is only a pile of logs, but it is not practical to combine this with the previous abseil.

A short creek walk follows to a 40m abseil from a small tree (keep left to reach the anchor). Drop the ropes very close to the cliff face to minimize the chance of getting them caught in the trees below.

Follow the cliffs less than 100m back to the Devil’s Hole track.