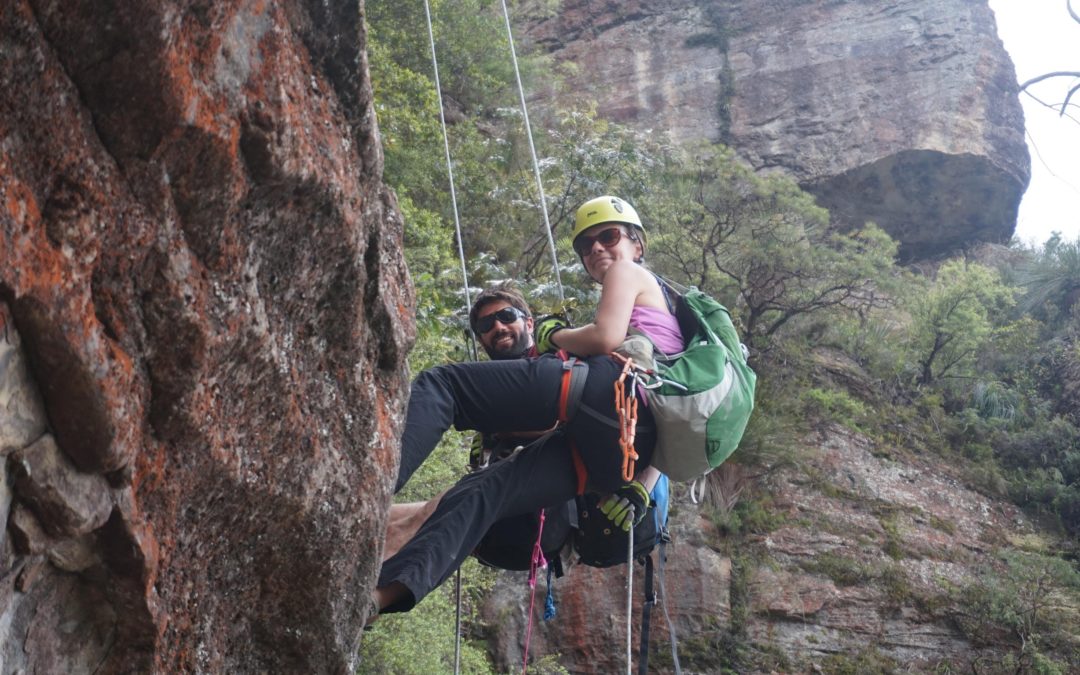 We met at Katoomba train station a bit after 9.30am already being a very hot day. The staff from Mountain Design (Sydney) predicted the afternoon thunderstorms at 3pm, luckily it hit Katoomba at 7.30pm.

The trip was going to have a few challenges, the first one was the use of rope protectors as much as possible. The second was that I only took a 60m and a 27m ropes which meant that I would have to pass a knot on at least one abseil, 45m, and the last one was the exit route. 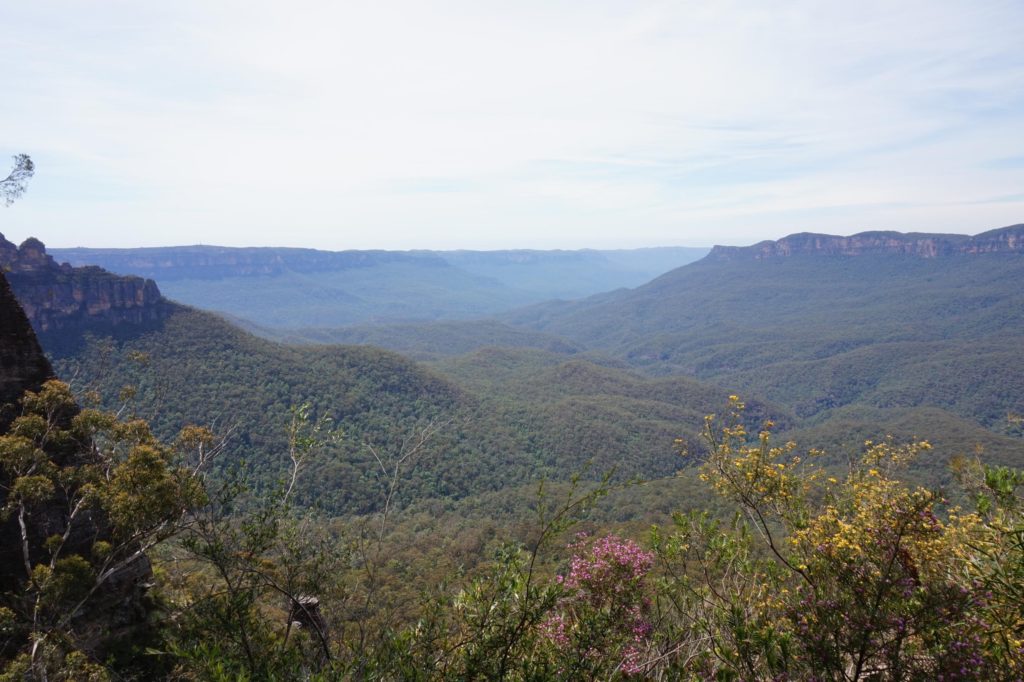 Our view in the morning, photo Damon Ramos

The first abseil was the longest and everyone did single strand using one and then 2 rope protectors attached to the anchor. I went last, double strands and had to pass the knot 15m from the bottom, fun. 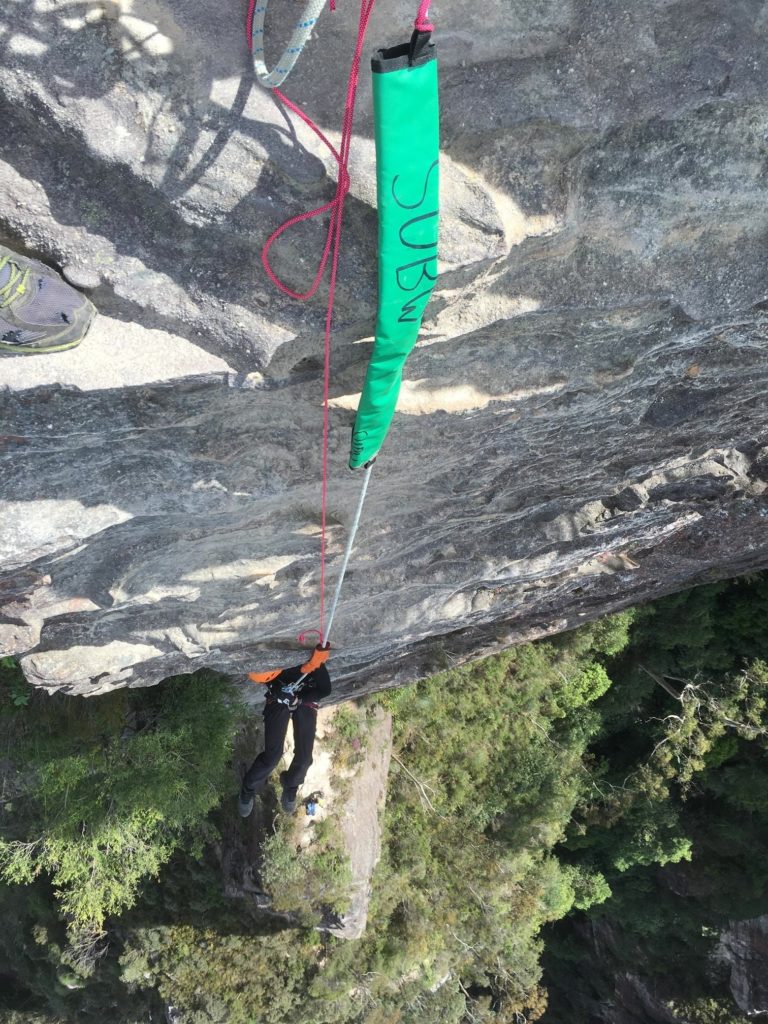 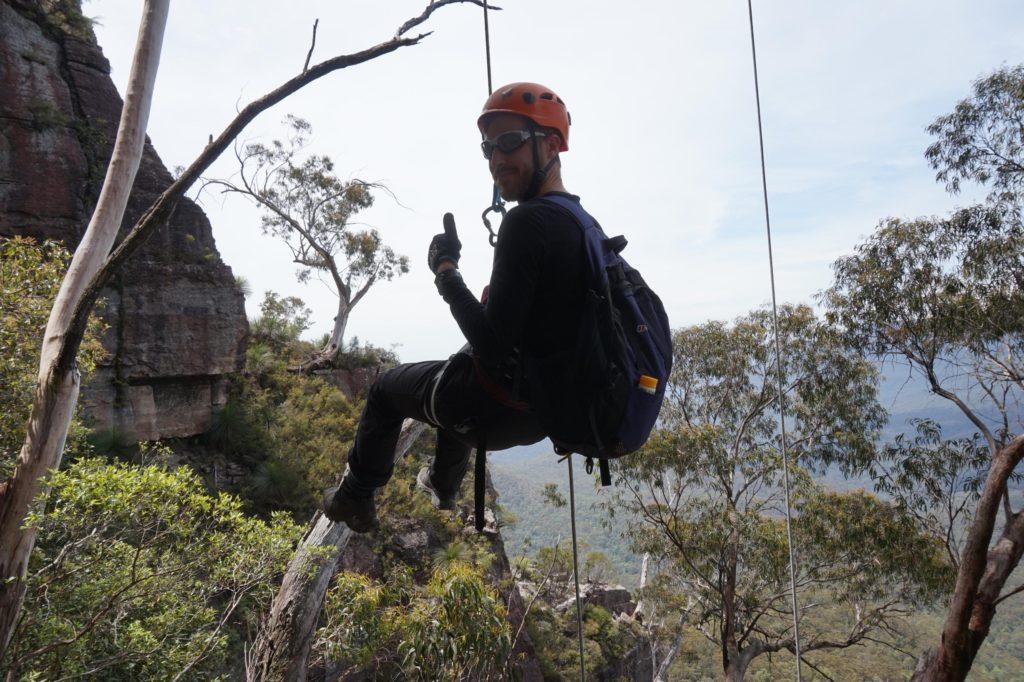 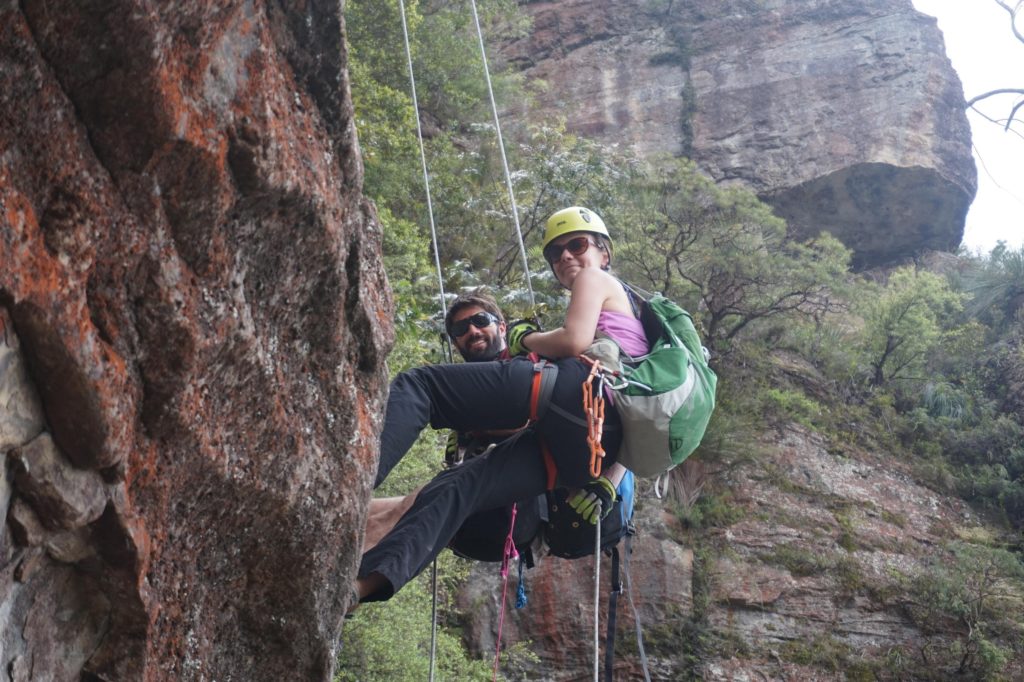 At the bottom Sue left us to go up via the Furber steps with one of the rope. The rest of us turned right and quickly got to the landslide with the first view of our pass. 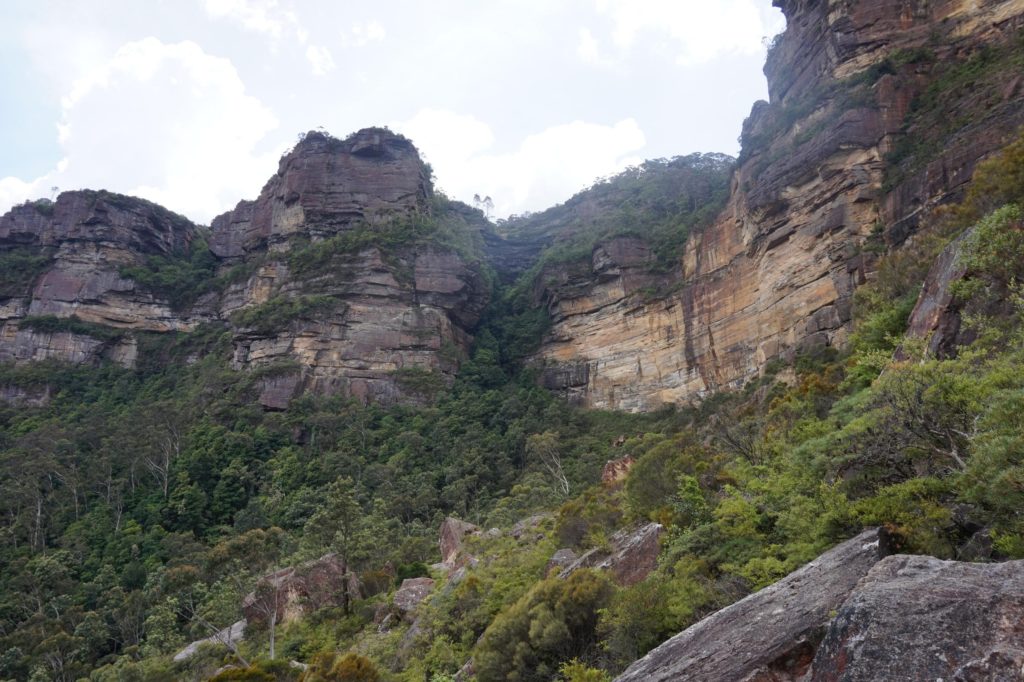 Our exit creek is in the middle, photo Damon Ramos

We left the Federal track to go up before the creek and went to the bass of the cliff which we followed to join the creek. The way up wasn’t hard to find, crossing the creek when it became impossible on our side. We spent some time in the first amphitheater where we saw 3 hanging ropes, 2 to climb and one to abseil. 2 bags were at the bottom but nobody nearby, the climbing setup looked weird with knots clipped to many quick-draws, I’ve never done it like this and I’m not sure why. We then took the highest ledge on the right and then followed a path all the way to the bottom of a 8 meters climb. The climb is in a chimney with a lot of hand and foot holes. I free climbed it and top belayed the others. 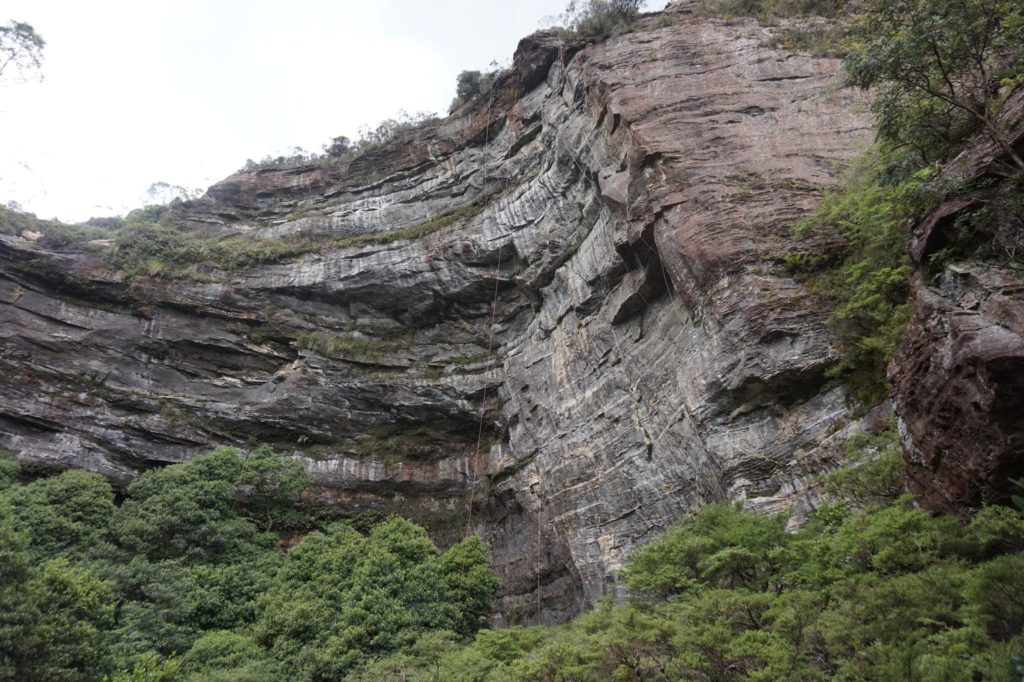 The pass must be fairly used because a path is easily followed to Glenraphael Drive. Below the road we found an inhabited cave.

I don’t think that the pass has many difficult sections for climbers or canyoners and it’s a lot more fun than Furber Steps. It took us approximately 1 hour to the top. 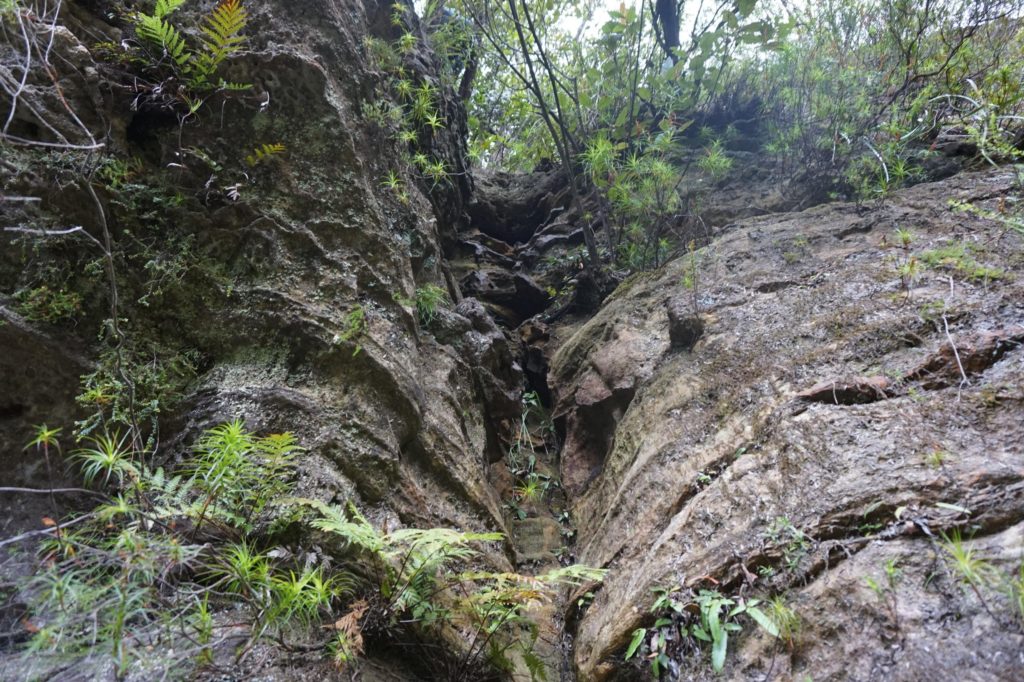 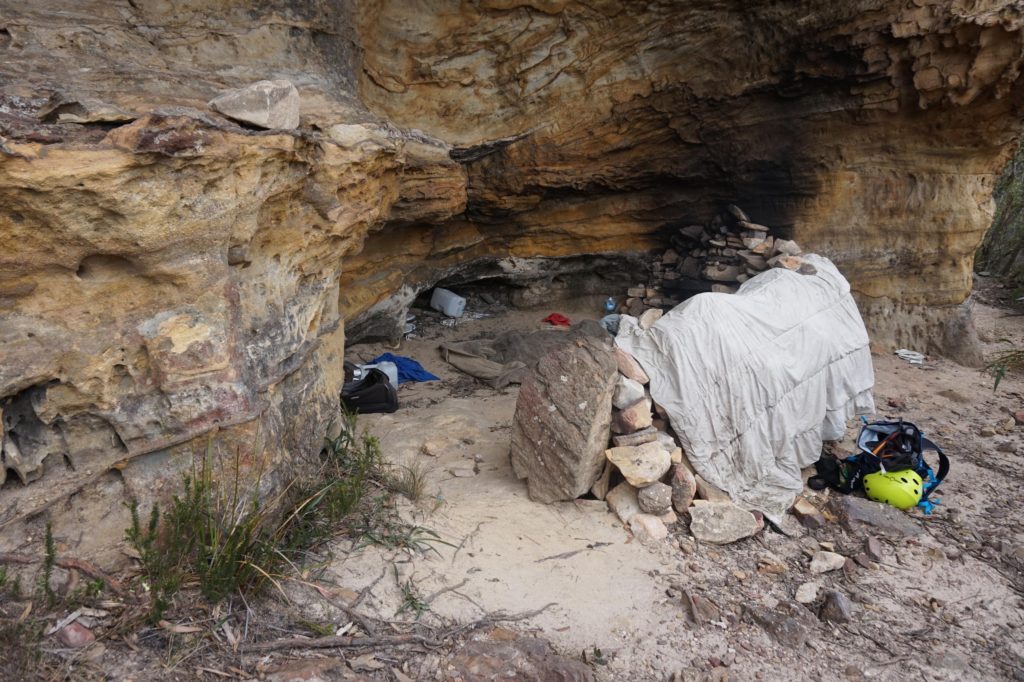 The optional part of the trip was Empress canyon to cool down. I wrote in the log book the start time of 3.30pm, 2 hours after the last commercial group. We quickly did the 3 jumps, the first one was a wake up call for me without wetsuit and I didn’t hang too long in the water. Before we knew it we were at the only abseil with a few clients still waiting to go down. We put our harnesses and quickly rigged the right side. After packing the rope and harnesses someone told me that he forgot his pants, with his car keys inside, at the beginning of the canyon when he put his wetsuit. We started walking up to the junction and decided to do the full canyon a second time, it’s so short there is no point going to the beginning without actually doing it. Unfortunately the pants weren’t there and we started to worry they had been dropped just before the abseil. But before we started I heard metallic noises of carabiners against descenders upstream and suspected a commercial group was getting ready. Luckily they had the pants with them. We started our second run at 4pm after making sure nothing was left behind.