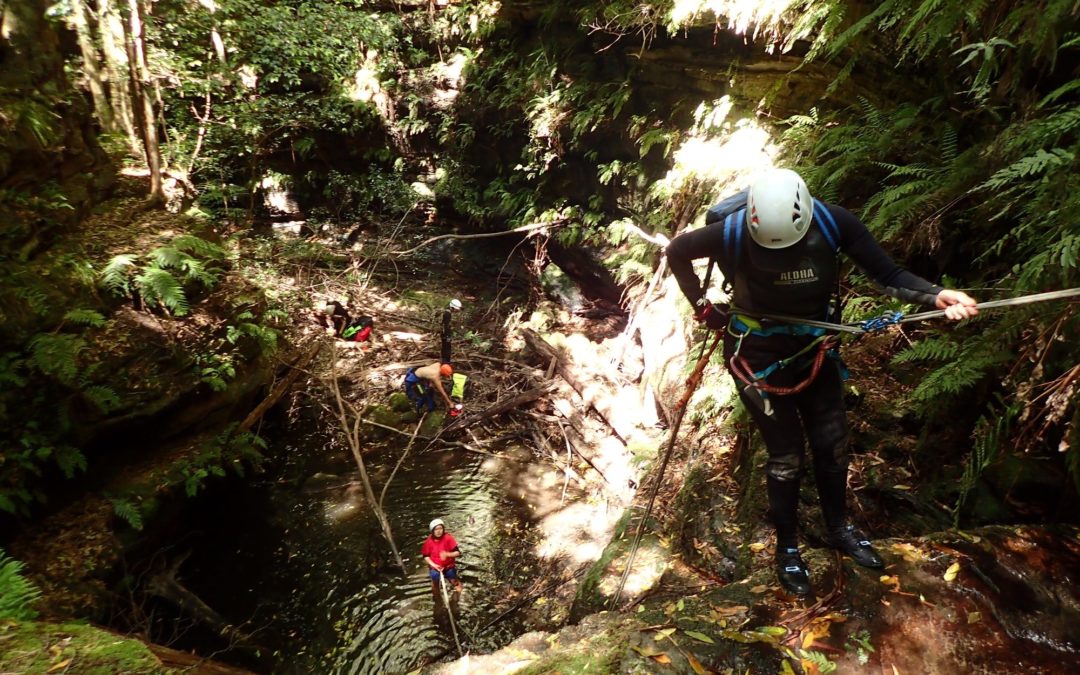 Having evenly distributed ourselves across every carpark in Wentworth Falls that could be interpreted as “near the station” we re-organised into a couple of cars, dropped one at our exit point and drove out onto Tablelands Rd.

The walk in was open and uneventful and we reached the creek proper via a ~20m abseil. At the bottom we found an old set of rock steps leading up the slope, so there must be another way in. Anyway, our way was easy enough.

Most of the upper creek flows over bare bedrock and was very pretty, if a little slippery. It closes into definite ‘canyon’ a few times but nothing especially deep or sustained. We agreed it was an excellent walk with sections of canyon. The abseils were all fairly short and most of them could be hand-over-handed – which would help with the anchor situation (not exactly textbook) and getting descenders jammed on the low starts. The water was freezing but there wasn’t a lot of it, and the thermals and wetsuit camps alternated their claims to the title of genius. We had lunch below the last abseil before rock hopping down to the next major junction, taking our suits off and exiting up the side creek.

At the first major fork there was some sort of visibly inhabited bush camp set up. I hadn’t made anyone sign a form indemnifying the club from any recurrence of the plot of ‘Wolf Creek’, so we crept past before climbing the right bank to look for a break in the cliff-line. D2 found one after only a few hundred metres and it was a good zig-zagging ~200m ascent to the very end of our exit fire trail. This brought us to the hermit’s outermost perimeter defences – mosquitos trained to prefer dry, windy ridgetops over wet, sheltered canyon environs – so we kept our break short before wandering up the trail to the car.

A great day out with a big group! Press on etc.